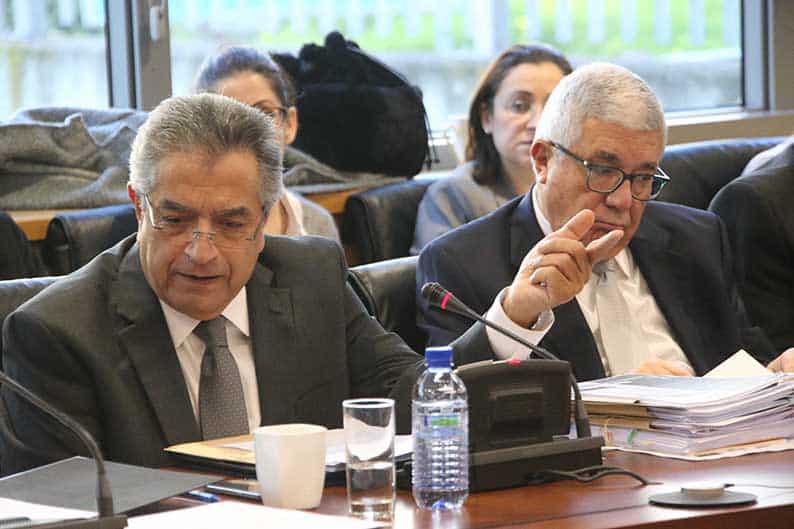 By George Psyllides and Evie Andreou

Heated exchanges between former friends, the attorney-general and the president of the supreme court, marked Wednesday’s parliamentary discussion on recent revelations within the justice system, with the latter official also turning on the media accusing them of staging public trials and weakening confidence in the judiciary.

Supreme court president Myron Nikolatos who, besides having to defend the integrity of the court, was also trying to fend off conflict of interest allegations concerning himself, said he was no longer friends with attorney-general Costas Clerides, a former supreme court judges himself, following a recent decision relating to the Bank of Cyprus.

“The attorney-general also honoured me with his friendship for 45 years, 25 of which he had spent as a colleague,” Nikolatos told members of the House ethics committee, reading from a prepared statement. “Unfortunately, the friendship ended on his part as soon the Eliades-Bank of Cyprus decision was issued.”

Clerides, who was sitting next to Nikolatos during the meeting, said it was offensive and sad for the president of the supreme court to say such a thing.

He admitted that certain supreme court decisions on the matter had “brought about a rift”.

But he said the distance was down to disappointment and that he had never suggested the case was lost because of relations between the judges and lawyers.

The case that sparked the rift and precipitated the crisis concerned an appeal filed by former BoC CEO Andreas Eliades against his imprisonment for market manipulation.

In a 2 to 1 decision, the three-bench supreme court found that Bank of Cyprus and Eliades, although they had made false representations about the financial status of the bank, did not do so with intent to manipulate the market but rather to ‘reassure’ shareholders.

That decision was criticised by Clerides and the Securities and Exchange Commission.

Later on, the attorney-general’s brother, Nicos Clerides, made a series of detailed claims that the courts are controlled by the Polyviou and Chrysafinis law firm, which represents BoC.

He said all supreme court judges had a child at the law office that promoted the bank’s interests. He also revealed that Nikolatos’ sister and daughter had settled out of court two claims they had filed against BoC in relation with convertible bonds they had acquired.

Nikolatos denied any wrongdoing, something which he repeated on Wednesday, warning that the affair has dealt a blow to public confidence in the judiciary.

“The crisis in the judiciary, as a result of the unsubstantiated and unfair claims made recently, as well as the public trials in the mass media, have unfortunately weakened the judiciary with tragic consequences,” he said.

“Calling for interference in the operation of justice and suggestions that we need foreigners to solve our problems constitute a danger for the independence of justice, with unforeseen consequences for Republic and the rule of law,” he added.

In a 10-page document he submitted to the committee, Nikolatos said that the role of the media was very important but that some journalists were distorting facts.

Public trials through the media, he said, were “unacceptable and unfair”.

He said that all judges were acting in accordance with the constitution, laws and regulations of the supreme court, which are not only in line with the European Court of Human Rights case law but had preceded it.

Nikolatos also said that he had been “shred to pieces” by the media because he gave an innocent vote in the Eliades case and wondered if the supreme court president could be treated that way, how would judges deal with cases before them.

Clerides said that public debates cannot be prevented and do not constitute intimidation.

He said that he too had been repeatedly criticised by the daily Politis and knew the reasons behind it, but he added that criticism must be accepted.

Referring to Nicos Clerides’ complaints that the entire judiciary was controlled by Polyviou, Nikolatos said that the attorney-general himself had a ‘spiritual affiliation’ with Polyviou as they are god brothers. He added that Costas Clerides had been a judge in the Nicholas case in which Polyviou was a lawyer. He was referring to a 1998 case against Cyprus Airways filed by a former trainee pilot of the now defunct national carrier for unlawful dismissal and for which the European Court of Human Rights upheld an appeal last year filed against Cyprus by the pilot.

The attorney-general replied that he did not know how to compare the conflict that Nikolatos was referring to with the case his brother had reported.

He added that when he had attended the three-member court of appeal on the Nicholas case, there was no reference in the judicial institutions for having a  ‘spiritual affiliation’ with the lawyer. He added that a conflict was later established in that case concerning “in laws.”

As a step to restore public confidence, Nikolatos said the supreme court planned to reinstate strict rules regarding recusals, which had been in place until 2006.

Those rules banned participation of a judge even in cases where lawyers who were partners or employers of relatives appeared before a court.

They were withdrawn however because it created problems in the smooth operation of the courts and the universally accepted impartiality of the judiciary.

“Recusal of judges not only when relatives acted as lawyers, but also when all the lawyers in a firm where their relative was employed handled cases, would create serious problems to the courts’ daily operation,” Nikolatos said. “However, in light of the current state of affairs, it is seriously being discussed to make rules stricter, that is, as they were up until 2006, whatever the cost may be.”