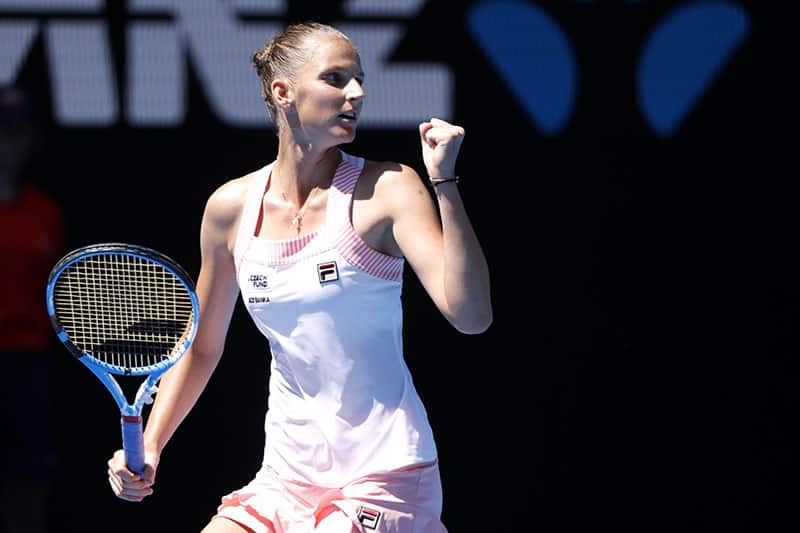 MELBOURNE, Jan 23 (Reuters) – Serena Williams squandered four match points and blew a 5-1 lead in the deciding set as seventh seed Karolina Pliskova produced a fightback for the ages to claim a 6-4 4-6 7-5 quarter-final win over the American great at the Australian Open on Wednesday.

Williams, chasing a milestone 24th Grand Slam triumph, also saved two match points in the last game but netted on the third as the big-serving Czech shocked a packed Rod Laver Arena with her remarkable rally from the brink of defeat.

The American’s hopes of matching Margaret Court’s all-time record of Grand Slam singles titles, and claiming a first since becoming a mother in 2017, were denied once more, after she also lost in finals at Wimbledon and the U.S. Open last year.

While disappointed, the 37-year-old was philosophical in defeat and pledged to regroup for another tilt at the French Open.

“It’s definitely not easy for me. From day one, I expect to go out and, quite frankly, to win,” the seven-times champion in Melbourne told reporters.

“That hasn’t happened. But I do like my attitude… I’ve only been playing 10 months, but I expect to win, and if I don’t, it’s disappointing.

“I rather think of it that way and know that it’s going to happen sooner or later than making an excuse for myself. I don’t like making excuses.”

The brave Pliskova advanced to meet Naomi Osaka in the last four, denying Williams a chance to avenge her controversial U.S. Open final defeat to the Japanese fourth seed.

“Normally I’m having a lot of comebacks, but maybe from a set down or a break down, so nothing like this. I think it’s the best comeback ever so far in my life,” an elated Pliskova told reporters after qualifying for her first Melbourne semi-final.

“This time I really believed, like, (she’s) still a player, I know she’s the greatest ever, but I don’t want to put her somewhere where I would not have a chance to beat her.”

Pliskova avenged her quarter-final loss to Williams at last year’s U.S. Open and now holds an enviable 2-1 Grand Slam record against the American, having beaten her in the 2016 semi-finals at Flushing Meadows.

The 26-year-old former world number one, chasing her maiden Grand Slam title, is the second Czech into the semi-finals after double Wimbledon champion Petra Kvitova thrashed home favourite Ashleigh Barty on Tuesday to book a match with Danielle Collins.

Locked in a three-way battle with Osaka and Kvitova to take the world number one spot from Simona Halep, Pliskova will emerge as the top-ranked woman if she claims the title.

Williams, seeded 16th as she continues her return from maternity leave, rolled her ankle when serving for the match at 5-1.

She promptly double-faulted after missing a passing shot on her first match point and was broken after dumping a backhand into the net.

Pliskova held on grimly, saving three more match points when serving to stay alive at 5-4, before breaking Williams to love and charging to 40-0 in the final game.

Williams saved two of the match points, the second with a courageous backhand winner, but Pliskova held firm to add another highlight to a tournament laden with upsets.

The American said her ankle was not a factor in defeat, and credited Pliskova for playing “unbelievable” on match points.
Osaka reaches Melbourne semis for first time, defeats Svitolina 6-4, 6-1
“She literally played her best tennis ever on those shots,” she said.

U.S. Open champion Naomi Osaka managed to keep a lid on her simmering temper and powered to a 6-4 6-1 win over Elina Svitolina on Wednesday to book a spot in the Australian Open semi-finals for the first time.

The 21-year-old, who will play Karolina Pliskova for a place in the final, committed a string of unforced errors but still proved too strong for the sixth-seeded Ukrainian.

Osaka wrapped up the win in an hour and 12 minutes to become the first Japanese woman to reach the last four at Melbourne Park since Kimiko Date in 1994 and will meet Pliskova for a place in Saturdays final.

“I have played her (Pliskova) a couple times already. She’s really tough to play,” said Osaka. “I can barely read her serve, so it’s very difficult for me.

“I see now that she doesn’t hit too many unforced errors, which is a little bit dangerous.”

Osaka said Pliskova always seemed to stay calm on court, something she struggles with.

“For me, today, I had one goal – it was to try as hard as I can and not get angry. I didn’t do that well in the past two rounds, but I played well today,” she added.

Osaka’s power was on full display against WTA Finals champion Svitolina, with the Japanese thumping 31 winners to her opponent’s 11. But she was also sloppy at times, committing 25 unforced errors, nine more than Svitolina.

“Everyone knows my backhand was a little bit inconsistent in the first set,” Osaka said. “I think I was making too many unforced errors on the serve.

“So in the second set I just tried to play more and see if she’s gonna hit winners or not.”

Ukrainian Svitolina, 24, kept her errors in check to get two service breaks back and stay in the opening set at 4-5.

Osaka blew three set point opportunities on Svitolina’s next serve with three embarrassing errors, berating herself with angry slaps on the thigh.

However, the Japanese gathered herself and hit a crisp backhand to set up a fourth chance, and converted it when Svitolina thumped a return into the net.

Svitolina took a medical timeout in the second set for neck and shoulder problems with Osaka up 3-0 but she was broken again after returning to the court.

“I felt pain from the beginning of the tournament here and there. It was going and coming back,” Svitolina said.

“Unfortunately today was a little bit worse than I expected.

“It’s normal to have some tension during the Grand Slam and it happens, but unfortunately I couldn’t handle it today.”

Fourth seed Osaka served her eighth ace then converted her first match point with an overhead winner to seal the win.

Do our extremists know better than the Greek government?