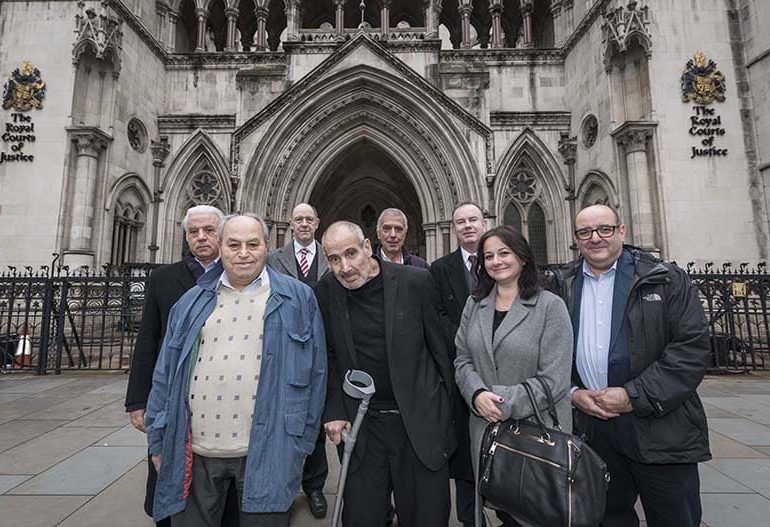 Claimants, family and their solicitors pictured at a court hearing in London in January 2018

The UK government on Wednesday announced it had reached an out-of-court settlement to the tune of £1m over claims by 33 Eoka veterans who said they were tortured whilst in detention during the 1955-1959 insurgency.

“The UK government has now reached an agreement with the [Eoka] claimants, in full and final settlement of those claims,” Wednesday’s statement said.

It stressed that the £1m (€1.1m) settlement did not constitute any admission of liability and set no precedent in respect of any potential future claims against the UK government. Legal costs will be assessed at a later date.

The British government said the decision aimed to turn a page in the UK’s relations with the island.

“It is a matter of regret for the UK government that the transition of Cyprus from British administration to independence should have been preceded by five years of violence and loss of life, affecting all residents of the island,” the British government said in a statement.

The case concerned claims filed against the UK government in July 2015 by 35 individuals (since reduced to 33) after Foreign Office documents released in July 2012 described claims of torture and abuse during the 1955-1959 Eoka insurgency.

In a statement after the decision, the Eoka veterans’ lawyers, K J Conroy & Co Solicitors Ltd, described the case as a ‘David & Goliath’ action.

During the course of the litigation, they said, four of the original claimants died and a further four lost mental capacity.

“The remaining claimants are all very elderly and, had the dispute continued for much longer, very few of them would have been able to enjoy their settlement payments,” the law company said.

“I always believed in this case as did the many other people who became involved,” said Kevin Conroy, the lead solicitor for the claimants.  “My faith in the clients and in the team I put together to assist the claimants has been vindicated.”

The group of elderly Eoka veterans had alleged they were abused and tortured by British soldiers and security services whilst held in custody when they were juveniles. They were considered terrorists by the British government for their involvement with Eoka.

In the case against the British government, the plaintiffs said they had eyewitnesses, declassified documents, newspaper reports and medical evidence.

The litigants were also encouraged to bring their case after former insurgents in Kenya against colonial rule reached an out-of-court settlement with British authorities.

In 2013 the British government admitted that thousands were tortured during Kenya’s Mau Mau insurgency between 1952 and 1963 and expressed regret, but denied liability and settled out of court for a reported €24 million to more than 5,000 victims.

“The passage of time means that it is now no longer possible to establish all of the facts with certainty,” the British government statement said, adding that it had settled the case in order to draw a line under this litigation, avoid the further escalation of costs, and to focus firmly on the future in its relations with Cyprus.  The government decision was later presented to the British parliament in a written statement by Minister of State at the Foreign and Commonwealth Office, Sir Alan Duncan.

The British government said that in reaching this settlement, it “reaffirms its highest respect for the memory and sacrifice of British and Cypriot service personnel and employees of the Crown who gave their lives, who lost family members or loved ones, or whose lives suffered permanent disruption” as a result of the insurgency.

It added that it also “acknowledges the strongly held view” of many Cypriots about this time.

The statement stressed the importance of learning from the past, but also looking to the future.

“Today, the bilateral relationship that the UK shares with Cyprus is one of friendship and close partnership; spanning a broad network of security, personal, business, administrative, cultural and educational ties.”

The UK government, it said, reaffirms its commitment to building a modern, forward-looking relationship between the UK and Cyprus, built on shared values of mutual respect and full equality.

British High Commissioner to Cyprus, Stephen Lillie, said that the agreement was an important milestone in the two countries’ bilateral relationship.

“I know there are many strongly held views about the final years of British rule in Cyprus.  We recognise and respect that.  But now we must look to the future. “

The claimants’ solicitors said that claims such as these were usually conducted by large law firms with deep pockets.

“In this case, two solicitors and a graduate historian assisted by a number of barristers and lawyers in Cyprus took on the might of the UK government and achieved a very creditable result for the claimants.”

They said that they spent many hours in research at the National Archives and other document repositories including the archives of the International Committee of the Red Cross in Geneva and the Cyprus State Archives, while their historian, Ruth Shelley, committed four years to the project.

“This is an excellent result for the claimants which brings this long running litigation to an end and goes some way to putting right a historic wrong,” the law firm said.

It said that the claim will not now be tried and the question of what really happened in Cyprus during the insurgency and who was responsible for it “will be left to the judgement of historians rather than that of a judge”.

“That something happened is not in doubt, there is ample evidence of mistreatment of suspects and detainees,” the law firm said.

While there were, at the time, undoubtedly wrongs on both sides, “this settlement brings to an end an episode which, in the minds of many Cypriots, was a stain on the record of the United Kingdom.”

The Eoka fighters’ associations said in a statement they felt justified by the decision, as it was proof that the UK government, by agreeing to pay the claimants, had acknowledged that torture did take place.

The settlement amount, they said, did not reflect reality and “cannot cover the pain, hardship, damage, losses and handicaps of the tortured fighters” but their aim was not the money.

“We are pleased that through this act they recognise that during our anti-colonial struggle they did use torture,” the group said.

They said they were very grateful to Kevin Conroy and his colleagues, as well as Cypriot lawyers Neofytos Pirilides, Panayiotis Demetriou, Christos Clerides and Andreas Erotokritou.