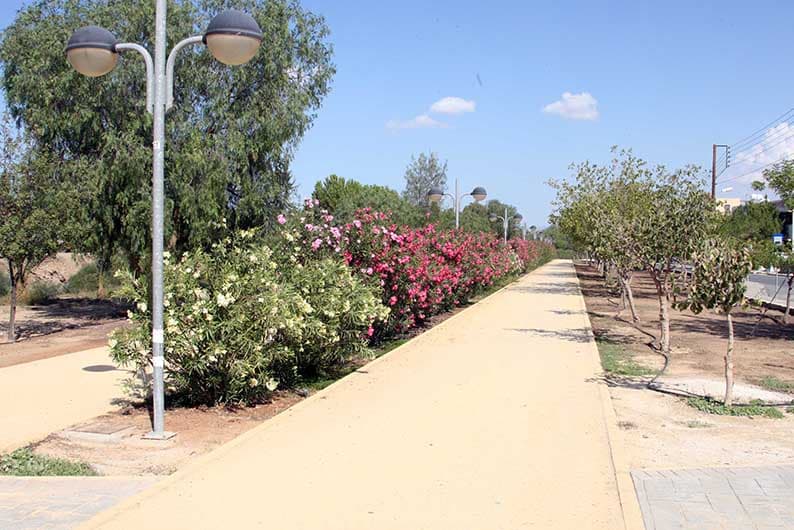 The go-ahead has been given for the construction of a five-kilometre linear park along the Pedieos River in the north aiming to bring the two communities together through recreational activities.

The European Commission (EC) announced on Thursday the signature on a number of agreements for the improvement or creation of infrastructure as part of the Aid Programme to the Turkish Cypriot community, including the linear park.

A four-year €17.7m delegation agreement was signed on the new ‘Local Infrastructure Facility’ with the United Nations Development Programme (UNDP), designed as a transparent mechanism for EU-funded infrastructure investments under the Aid Programme to the Turkish Cypriot community.

The facility, according to the EC Representation in Cyprus “aims to provide support for the identification, screening, development, procurement, and physical implementation of relevant local infrastructure investments.”

The list includes projects ready for implementation starting early 2019 such as the Pedieos River/ Kanlıdere Rehabilitation Project, the extension of the Morphou and Famagusta wastewater treatment plants and the establishment of green waste composting facility in Nicosia. The next step will be the recruitment of teams for these projects and a tendering procedure under the UNDP.

The European Commission recently completed a detailed feasibility study for the Rehabilitation of the Pedieos River, known as Kanlıdere to Turkish Cypriots.

“The scope of the study includes the construction of a linear park along an approximate 5-kilometre length of the river consisting of flood protection measures, cycling and walking paths, recreational areas and environmental educational facilities,” an announcement said.

By extending north and south of the Green Line, it said, “this bi-communal project aims to bring the Cypriot communities together through recreational activities.”

The Pedieos linear park currently stretches around 15km along the river bank, extending from Lakatamia to Strovolos and ends at the old Nicosia hospital in the city centre in the southern part of the capital.

These projects concern strengthening civil society organisations to address, among other things, prevention of domestic violence against women and children, improving the access of LGBTI+’s to human rights, improving the awareness and enforcement of patient’s rights and contributing to the empowerment of youth in the peace discourse in Cyprus.

Another project entitled “Innovative Entrepreneurship and Dialogue”, to be implemented by the Northern Ireland Cooperation Overseas (NI-CO), will work on the establishment of an innovation centre in Nicosia old town, on the provision of services to entrepreneurs, innovators and researchers, and the improvement of the entrepreneurship ecosystem. Additionally, inter-communal dialogue will be promoted via cooperation with the Cyprus Dialogue Forum.

The EC also signed contracts to support infrastructure such as the construction of the Nicosia branch of the northern Nicosia Trunk Sewer (NNTS), consisting of approximately 13 km of sewers and four pumping stations and of an irrigation system for the reuse of Morphou Wastewater Treatment Plant’s (WWTP) treated wastewater.

“The existing trunk sewer, which covers central, northern and southern Nicosia, is now running at full capacity,” an announcement said, thus restraining further development in the northern part of the town. The NNTS will facilitate the connection of more urban areas to the Mia Milia Wastewater Treatment Plant in line with the Urban Waste Water Treatment Directive.

As regards the treated effluent from the Morphou WWTP, it will be used to meet the required quality standards for the irrigation of certain agricultural crops and will be used to irrigate an area of approximately 30,000 m2 to the east of the existing WWTP, which primarily consists of citrus and olive orchards.

The EC also signed contracts for the continuation of the implementation of grant schemes for the Turkish Cypriot community in the fields of rural development, private sector development, human resources development, community development and civil society.

Ten contracts were signed with schools and lifelong learning organisations under the Innovation and Change in Education Grant Scheme.

Five school projects focus on enhancing social inclusion and mobility of children with special needs, improving English and Greek language learning practices with the aid of technology and improving the extra-curricular activities to enhance life skills of primary school students.  Five lifelong learning projects signed focus on improving the entrepreneurial skills of youth and women, enhancing social entrepreneurship practices in the Turkish Cypriot community and developing lifelong learning programmes in order to improve employability of youth and people with disabilities.