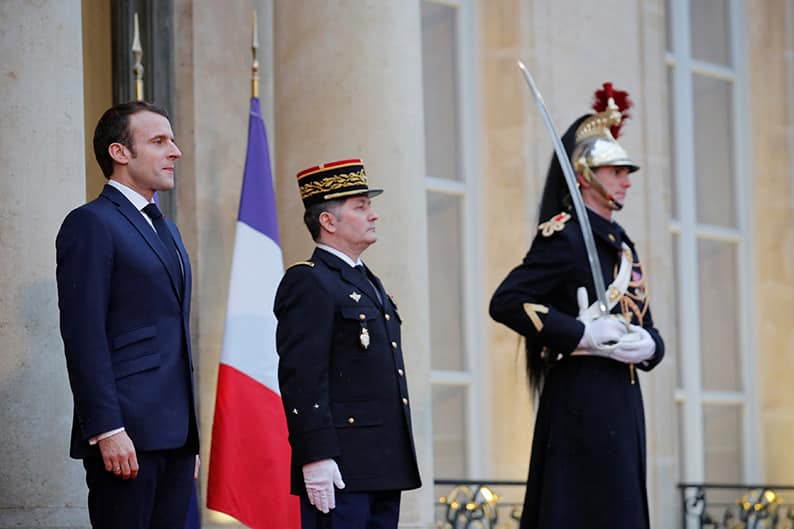 Macron's "grand debate" may enable him to show that he is indeed listening to voters' concerns. There are already signs that his popularity ratings, once barely above 20 per cent, have started to climb again although only by a few points

Populists and the far-right in Italy and France are mounting a multi-pronged assault on President Emmanuel Macron, hoping to unsettle his centrist, pro-Europe agenda ahead of European Parliament elections in May, while also shoring up their own bases.

Italy’s two deputy prime ministers, Matteo Salvini of the right-wing League and Luigi Di Maio of the populist, anti-establishment 5-Star movement, have sought to rile Macron on a host of inflammatory issues.

Salvini and Di Maio appear to believe that in attacking Macron, a strong Europhile, their core voters in Italy will be motivated. Macron has been upfront in framing the European election as a battle between anti-immigrant nationalists and pro-EU ‘progressives’ like himself.

In the ballot, he hopes to carry the centre and, along with allies, potentially build the largest bloc in the European parliament. The far-right and populists believe they may win a third or more of the vote, shattering traditional power bases.

With vocal support for France’s often violent “Yellow Vests” movement and suggestions that Macron’s administration is driving neo-colonialism in Africa, the Italian duo have ignored the convention of not interfering in another country’s politics.

The rise in tension shows how divisive the May 23-26 election is set to be, and hints at shifts in Europe’s political landscape that resemble populism in the United States, with fringe parties looking to overturn centrists like Macron.

Macron and his ministers have mostly claimed the high ground, ignoring many of the Italian politicians’ charges, while issuing flat responses to others.

But on Tuesday, angered by Di Maio’s accusations that Paris is worsening poverty in Africa and encouraging migration to Europe, the French foreign ministry took the unusual step of calling in Italy’s ambassador.

On Wednesday the foreign ministry went further, dismissing Salvini’s claims that Macron is unpopular and his hope that Macron’s En Marche party will lose in the European ballot.

“These unfounded statements should be read in the context of domestic Italian politics,” ministry spokeswoman Agnes von der Muhll said. “They are unacceptable.”

In the National Assembly, Europe Minister Nathalie Loiseau said Salvini was playing to a domestic audience and would have no impact in France. “We’re not going to be drawn into a stupidity contest,” she said.

Asked if Macron had spoken about Salvini and Di Maio at the weekly cabinet meeting on Wednesday, government spokesman Benjamin Griveaux replied: “No, because we only discuss issues that are important to the country.”

While Salvini has long been an outspoken critic of Macron, the assault by Di Maio is relatively new and is a sign of the problems his 5-star movement is having domestically, where it has been falling in polls ahead of the EU vote.

5-Star is seeking new alliances within the European Union and sees France’s “Yellow Vests”, who have said they will run candidates in the election, as a potential ally.

“Similar to other European governments, the French government is now mostly interested in protecting the interests of the elites and the privileged, but not of the people,” Di Maio wrote earlier this month. “Yellow Vests, don’t give up!”

NOT ALL ABOUT MIGRANTS

Yet while Macron dismisses Salvini and Di Maio as meddling outsiders, he faces a similar assault at home from Marine Le Pen, leader of the far-right Rassemblement National, who hopes to ally her party with Salvini’s in the European Parliament.

Le Pen, soundly defeated by Macron in the 2017 presidential vote, launched a campaign this month to turn the French against a new Franco-German treaty of unity and commitment to the EU.

In videos – including one on Twitter viewed 165,000 times – Le Pen claimed the treaty would involve France surrendering territory to Germany in the Alsace and Lorraine border regions, that French citizens there would have to learn German, and that Macron was considering sharing France’s permanent seat on the UN Security Council with Germany.

“NON, Alsace and Lorraine will not be transferred to Germany,” it said, using capitals several times.

In some opinion polls, Le Pen’s party is marginally ahead of Macron’s on Europe. If her vote is combined with other far-right parties in France, they are several points clear.

But campaigning has not properly begun. Macron is spending the next two months conducting a nationwide debate to “listen” to French voters and respond to the “Yellow Vests”, the most serious challenge his presidency has faced.

For Dominique Moisi, a political consultant at the Montaigne Institute, the rupture between Italy and France is not just about the May election, but a more fundamental shift in ties between neighbours who helped to found the European project.

Moisi argues that France’s greater closeness to Germany has left Italy feeling looked down upon, and that has fuelled resentment, not just among populists and the far-right, but among Italian elites.

“Seen from Rome … there’s a very emotional feeling towards France, as if it has scorned and even abandoned Italy,” he wrote this month.

“From the crisis in Libya, a country Italy knows well, to the migration issue, Italians feel that at each turn they have been deliberately ignored by a country that increasingly, and with less and less justification, looks down on them.”

If true, Salvini and Di Maio may succeed in exploiting those sentiments by bashing France in the run-up to the May vote. For Di Maio, that effort is clear in his attempts to align his movement with the “Yellow Vests”.

Le Pen – who like Salvini has met Steve Bannon and taken advice on how he engineered Donald Trump’s presidential victory – is taking a similar tack, albeit on different issues.

In an article in the Guardian this week, Liegey said polling by his group showed that mass migration was not the main concern of voters, who ultimately want to feel a sense of security and that they are being listened to.

Macron’s “grand debate” may enable him to show that he is indeed listening to voters’ concerns. There are already signs that his popularity ratings, barely above 20 per cent, have started to climb again although only by a few points.