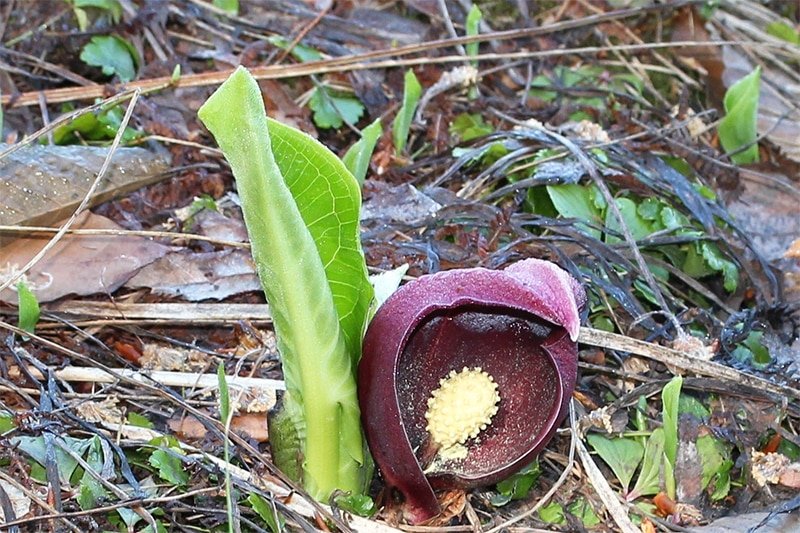 Habitat: A perennnial member of the Aracea family that grows up to 60cm in moist woodland, swamps and wetlands in the southern United States. The plant has a conical rhizome and is distinguished by first producing a chocolate coloured spathe – a large bract – that encases a bright yellow spadix. The dark green, deeply-veined leaves appear as the spathe dies away.

What does it do: The early American settler physicians, known as the ‘eclectics’ recorded that the Native American medicine men and midwives placed the leaves of the plant on the genitalia to induce childbirth and reduce abdominal convulsions. They also made concoctions from the roots to expel intestinal worms.

Despite the repulsive odour of Skunk Cabbage in times of famine the tribes would gather the plant as food but it would have to be boiled to the point where it no longer had much nourishment to detoxity it. In this condition it was merely a stomach filler.

Failure to cook the plant often caused fatalities because it contains calcium oxalate crystals that resemble tiny glass needles that can penetrate the tongue, throat and mouth leading to asphyxiation; it can also cause long-term damage to liver, kidney and bladder.

Skunk Cabbage has one of the foulest odours associated with any plant, and yet is so effective as a pollinator, botanists claim to have witnessed amphibians climbing into the spathe.

European herbalists boil the root to treat asthma, chronic catarrh, rheumatics, nervous disorders, whooping cough and dropsy (oedema). Dried root is made into an ointment to treat ringworm and bedsores in the elderly.

Alexander McCowan: author of the World’s most Dangerous Plants