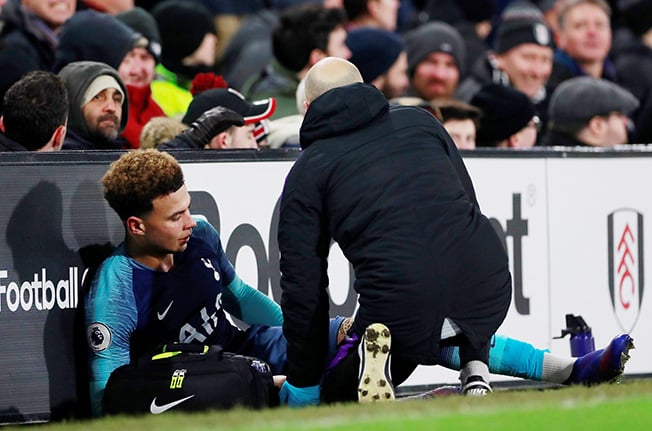 Dele Alli joins Harry Kane in the treatment room and the influential pair are going to miss a crucial part of Spurs' campaign, starting with the Carabao Cup semi-final second leg with Chelsea on Thursday

Alli has been ruled out until early March after sustaining the problem in Sunday’s 2-1 win over Fulham, the third time he has suffered a hamstring injury this season.

The 22-year-old joins Harry Kane in the treatment room and the influential pair are going to miss a crucial part of Spurs’ campaign, starting with the Carabao Cup semi-final second leg with Chelsea on Thursday.

They are also set to miss the FA Cup fourth-round tie at Crystal Palace, the Champions League last-16 first leg against Borussia Dortmund, the Carabao Cup final if they beat Chelsea and a host of important Premier League games, potentially including the north London derby.

Pochettino said: “Now we need to be positive like with Harry Kane. Of course, we are going to miss him for a long period.

“It’s one of the worst moments because we have ahead very busy fixtures.

“You know very well that for us the squad is very important and of course it’s a very good opportunity for other players to step up.”

Pochettino’s stretched squad, which is also missing Son Heung-min to international duty, has further highlighted the club’s lack of transfer activity in the last two windows.

The Argentinian has reiterated that the club are open to making additions in the next week, but again warned of the difficulties.

“Our idea is always I’m so open to improving the squad and adding players, with Harry Kane and Dele Alli fit or not fit,” Pochettino said. “It’s so important to have a clear message to everyone.

“I was always open. I was open in the summer, I’m open now, but the different thing is the reality and it’s difficult for us to add players that can help us or improve our squad. We’re open.

“It’s not that now because we suffer some injuries we’re going to change our strategy. It’s so clear.

“Always we were so open to finding the right profile and the right players to arrive and improve us. But we’re working. We’ll see what happens until the end. But we were always open to improving the squad.

“I think this transfer window is always the most difficult transfer window and you know very well because I’m seeing you every day, there are not too many transfers, with a lot of loans.

Despite a shortage of attacking options, Pochettino is insistent on not using out-of-favour striker Vincent Janssen.

The Dutchman signed in the summer of 2016, but has been a flop at the club, not featuring since August 2017.

He has been linked with a move away from the club this month, with Pochettino saying there is no way back for him in north London.

“I think it’s so clear that now it’s one year and a half that he’s not in our plans,” he said. “He’s not in Tottenham’s plans. Not in just the manager’s plans but the club’s plan.

“Eighteen months ago we took the decision for him to try to find a different place to play because for different reasons it didn’t work. That happens in football.

“It’s not a personal problem, it’s about the professional side. For different reasons that professional relationship isn’t working and we need to find a solution. We are trying to find the resolution.

“He got the injury months ago and we’re helping him, trying to find the right place for him to feel again like a player and play football.”

Spurs have received some rare positive injury news ahead of their trip to Stamford Bridge following the return of Moussa Sissoko (groin) and Lucas Moura (knee) to contention.

Victor Wanyama is also back in training, but will not feature against Chelsea.

After upstaging Maduro, Venezuela’s Guaido seeks to keep up pressure