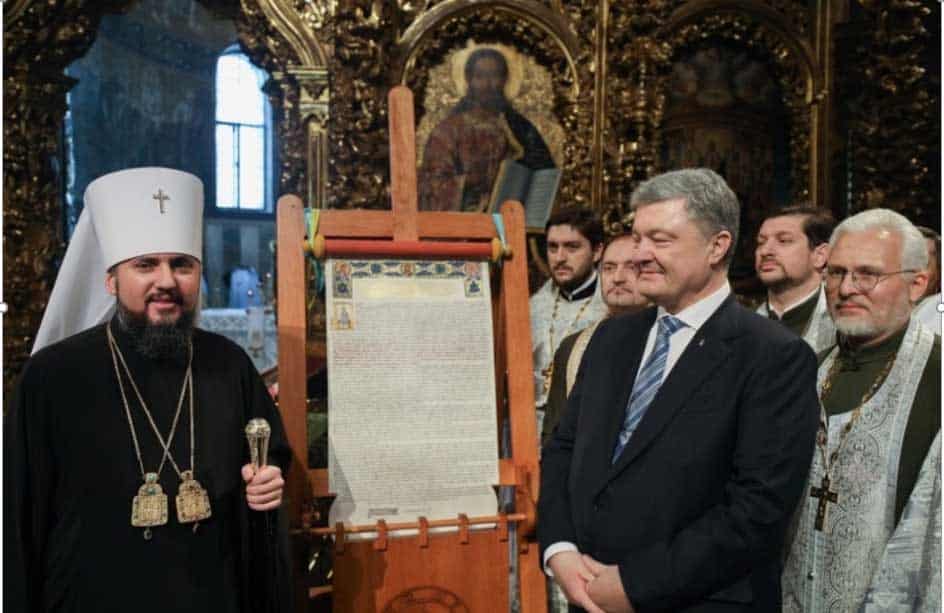 Ukrainian President Petro Poroshenko with Metropolitan Epiphanios of Kiev and All Ukraine.

The creation of the autocephalous Orthodox Church of Ukraine that happened early this year is the strategically important achievement leading to our independence. This is the foundation of our spiritual freedom. By achieving religious independence we have torn up the last chains that tied us to Moscow with its fantasies of Ukraine as a canonical territory of the Russian Orthodox Church.

The decision of the Ecumenical Patriarch and the Holy Synod has finally dispelled the imperial illusions and chauvinistic dreams of Moscow, which were not supported by any legal church document – about Ukraine as a so called “canonical territory of the Russian Church”. It was in 1924 when the Ecumenical Patriarchate acknowledged the fact that the so-called “transition” of the Kiev Metropolitan into the possession of Moscow had taken place “not by the canonical rules”. And on October 11, 2018, the Holy Synod confirmed this position once again.

The unifying Synod (Sobor) on December 15 created the Orthodox Church of Ukraine and it was Ukrainian President Petro Poroshenko who presented the newly elected primate of the Ukrainian Autocephalous Orthodox Church, Metropolitan Epiphanios of Kiev and All Ukraine. This new church will enter the family of Orthodox churches.

Ecumenical Patriarch Bartholomew invited His Beatitude Metropolitan Epiphanios to deliver to him the Tomos of establishment of its new sister autocephalous church.

The bestowal of autocephaly for the Orthodox Church in Ukraine that received Christian faith and holy baptism from Constantinople will guarantee its unity and preserve statehood that is now endangered by Russia waging a hybrid war against Ukraine for more than four years. It will further weaken the ‘Russkiy mir’ or ‘Russian world’ concept of the imperialist ideology that both the Kremlin and the Moscow Patriarchate have employed to enhance their influence in the post-Soviet area.

Numerous independent reports, including by the UN Human Rights Monitoring Mission in Ukraine and the Council of Europe Commissioner for Human Rights, testify that freedom of religion or belief is among many human rights and fundamental freedoms undergoing systemic violations in the territories of Autonomous Republic of Crimea and Donbas, temporary occupied by the Russian Federation.

We strongly condemn these manifestations of religious-bias violence and discrimination and we urge the Russian Federation to abide by the norms of international law and OSCE principles and commitments.

The Ukrainian government respects its citizens’ beliefs and guarantees that there will be no pressure to join the new Ukrainian church.

The state of Ukraine will respect the choice of those who decide to remain in the church structure that will maintain its unity with the Russian Orthodox Church. But it also guarantees that the state will protect the rights of those priests and believers of the Ukrainian Orthodox Church of the Moscow Patriarchate, who voluntarily decide to leave the influence of Moscow.

Boris Humeniuk is the Ukrainian ambassador to Cyprus

When it comes to property trust the numbers, not rumours

After upstaging Maduro, Venezuela’s Guaido seeks to keep up pressure