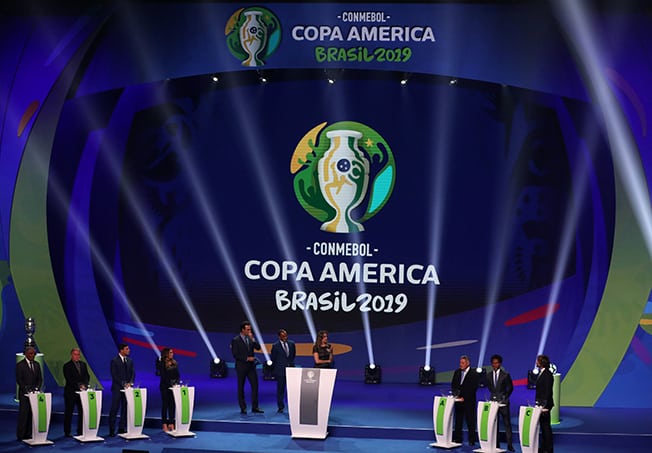 Hosts Brazil were given a kind draw and will face Peru, Venezuela and Bolivia in the 2019 Copa America, a tournament they have not won since 2007 and one they will be under huge pressure to win on home soil.

Thursday’s draw also placed Argentina, another side desperate for a major title after an even longer trophy drought, with Colombia, Paraguay and invited team Qatar.

The third of the three top seeds Uruguay are in perhaps the most difficult Group C, along with the other invited side Japan, plus Ecuador and reigning champions Chile.

This year’s tournament will kick off with Brazil against Bolivia in Sao Paulo on June 14 and take place in five Brazilian cities. The final is at Rio de Janeiro’s Maracana stadium on July 7.

“People have questioned me about the draw and some said, it’s easy, others said, be careful,” Brazil coach Tite said. “Our responsibility is to perform at the highest level, to play with joy and to be proud of representing Brazil.”

“We need to play really well, and that’s how you become champions.”

It marked the starting gun for what promises to be a high pressure year for both Brazil and Argentina.

The host nation have not won a major title since lifting the Copa America in 2007 and coach Tite, whose side were knocked out the World Cup at the quarter-final stage last year, is under pressure to deliver some silverware.

Argentina, meanwhile, have reached the last two finals of the Copa America and lost both times on penalties. Another loss would extend a trophy drought that stretches back to 1993.

The two-times World Cup winners will come to the tournament with Lionel Scaloni in charge and although the interim coach, who has a contract until after the Copa, would not be drawn on his rivals he said his aim was to triumph.

“It’s going to be difficult and no matter who we play we have to win,” he told reporters. “The idea is that we are as good as anyone; we just need to keep notching up the victories.”

They could also be without Lionel Messi. The Barcelona forward took a sabbatical from international soccer after a disappointing World Cup in Russia and has not said whether he will return to play in Brazil.

The Copa America is the oldest international tournament in the world and is played between the 10 South American nations and invited teams.

In addition to Rio de Janeiro and Sao Paulo, matches will be held in Porto Alegre, Belo Horizonte and Salvador.

“I think that will guarantee a great tournament.”

Klopp delighted with his fringe ‘Ferraris’ after win over Southampton