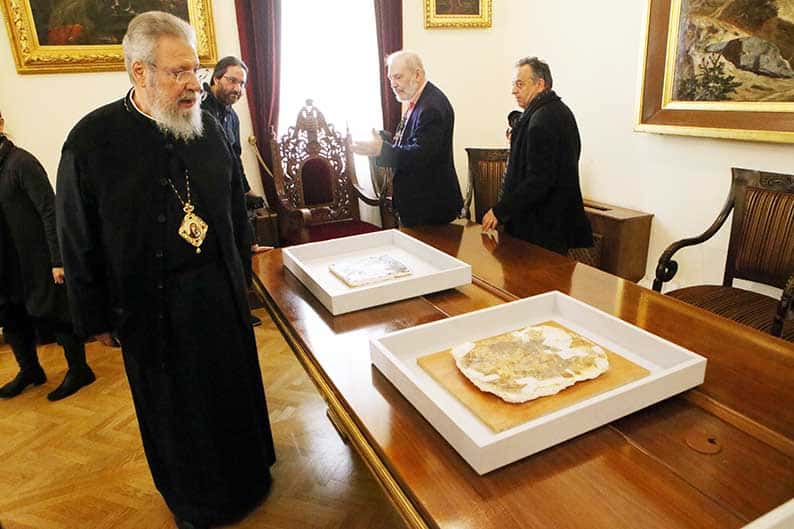 Archbishop Chrysostomos on Friday said that the Cyprus Church would spare no expense or effort to make sure stolen icons from Cypriot churches would be returned to where they belong, after receiving from Transport Minister, Vassiliki Anastasiadou, four fragments of religious frescoes removed from churches in the north following the 1974 invasion.

The frescoes were recently handed over to Cyprus in the Netherlands after they were recovered by international NGO Walk of Truth.

Anastasiadou travelled to the Hague to collect the frescoes that were repatriated earlier in the week.

Two of the frescoes have been identified as belonging to the church of Panayia Absinthiotissa, a 11th or 12th century monastery at Sychari, near Kyrenia. They are a portrayal of Virgin Mary attending the deposition of Christ and an image of a martyr.

One of them came from the church of the 15th century Virgin Mary in Assia, Famagusta, while the provenance of the fourth one is not known, but it has also been identified as Cypriot.

The four frescoes were delivered by Anastasiadou on Friday to the Archbishopric and will be taken to the Cultural Centre of the Archbishop Makarios III Foundation. They will be restored by the antiquities department.

The archbishop congratulated everyone who worked over the past years for the repatriation of the frescoes and a number of religious icons.

“It was not an easy task, they worked with devotion and we had a happy ending,” he said.

He also said that the Church of Cyprus, the Archbishopric in particular, was determined to cooperate with the government, the Department of Antiquities and others to repatriate as many stolen religious artefacts that are scattered in Europe and elsewhere, as possible.

“We will spare no money, efforts or hardship so that they will return to their place,” he said.

Anastasiadou said that the repatriation of the frescoes was a collective effort of the state, church, police and other institutions.

The looting of Cyprus’ cultural heritage, she said, was to such extend, that “it has violated our human rights.”

“The wound will only heal when they are returned where they belong, to our looted churches,” she said.

The minister also thanked Cyprus’ ambassador to the Netherlands, Elpidoforos Economou, for his assistance and Walk of Truth, a not-for-profit organisation seeking to locate and repatriate stolen antiquities from plundered religious and cultural monuments of Cyprus that are trafficked around the world.

The head of the antiquities department, Marina Solomidou-Ieronymidou, said that the repatriation of artefacts was not an easy task as it can take years.

She said that the role of state legal services, the ministry of foreign affairs and the Cyprus police is decisive in such cases “because coordinated efforts are needed to have a successful end.”

“It takes a lot of perseverance, patience, dedication and professionalism,” she said. “We have very capable people and we can be successful in other repatriations.”