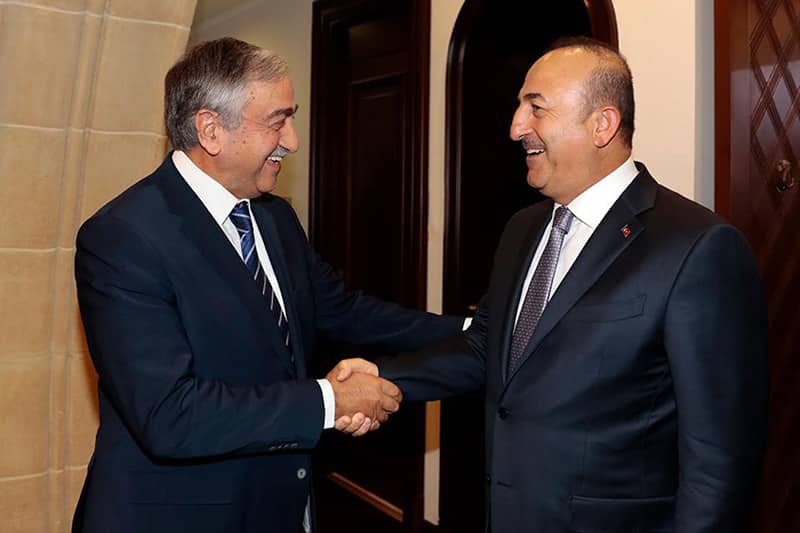 Turkish Foreign Minister Mevlut Cavusoglu is on the island for contacts in the north concerning the Cyprus problem and recent developments in the Eastern Mediterranean, reports said on Friday.

Cavusoglu received an honorary doctorate on Friday morning from the American University of Kyrenia.

He was to meet with Turkish Cypriot leader, Mustafa Akinci, at 1pm followed by meetings with party leaders. He will also meet with ‘House speaker’ Teberruken Ulucay.

Akinci and Cavusoglu are to hold a joint press conference at around 3pm.

The Turkish foreign minister will also participate in a television programme with three journalists that will be broadcast live. According to daily Yeni Duzen, the TV programme broadcast was arranged by the Turkish embassy in the north.

In his address at the ceremony at the American University of Kyrenia, Cavusoglu said that he had come to the north because no one could “give direction alone” to the Cyprus issue and that the aim of unofficial meetings with all sides was to determine what type of solution is to be sought after.

“We are seeing indecisive stances, statements. We are seeing tricks. What are we negotiating for? For a federal solution again? For a two-state solution, or for confederation, or for another option? We should determine this beforehand. This is what we are doing now,” he said.

Afterwards this is done, he said, the framework should be determined.

He reiterated Turkey’s position that settlement negotiations should not be open ended. “We do not have the time and energy to lose for negotiations to stay open for many years. No one has the right to give hopes to the Turkish Cypriot people and then disappoint them again.”

Cavusoglu also said that the Cyprus problem was “a great cause” and that it should not be sacrificed for individuals’ political ideology or political ambitions.

“Let no one forget this. Let no one try to give direction alone to the Cyprus cause by saying I want this, I had said this, I will say this. And this is the reason for our coming to the island today,” Cavusoglu said.

He added that his visit aims to coordinate Turkey’s and northern Cyprus’ course of action as regards the Cyprus problem.

“We have come to determine all together what to do, as was the case until now… I hope that we will be stronger during the forthcoming period in the Cyprus cause by securing this unity during today’s meeting,” he said.

Turkey, he said, had always maintained that the steps for exploring for hydrocarbons around the island were wrong but that the Greek Cypriot side carried on regardless.

“In February our second platform will come and we will also launch drillings,” he said. He warned that Turkey would not allow anyone to usurp the rights of the Turkish Cypriot people.

Cavusoglu had warned last summer that if the Greek Cypriot side started drilling Turkey would too.

Turkey’s drillship Fatih started drilling last November at the Alanya-1 well in the Eastern Mediterranean searching for oil and gas for Turkish Petroleum (TPAO). The drilling programme was expected to last 150 days.

Call for EU to expand access to free WiFi

Look back in anger