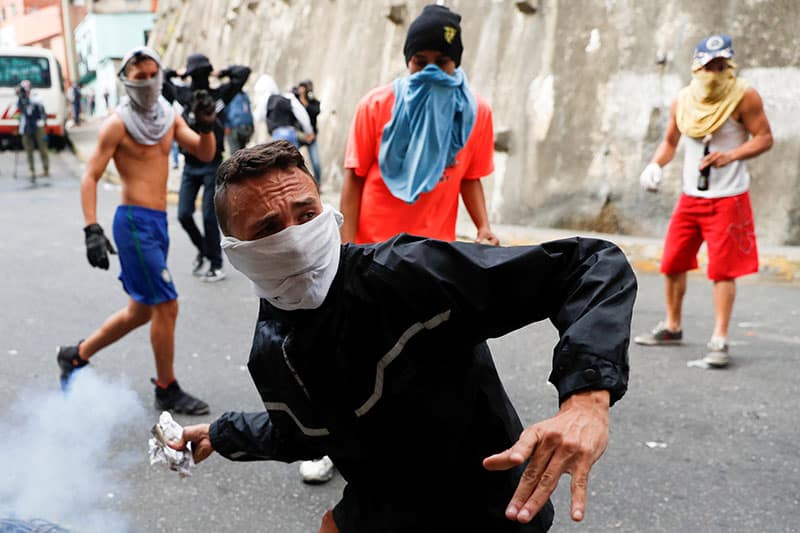 FILE PHOTO: A demonstrator throws back a tear gas canister while clashing with Venezuelan National Guards during a protest close to one of their outposts in Caracas, Venezuela January 21, 2019. REUTERS/Carlos Garcia Rawlins/File Photo

By Steve Holland and Brian Ellsworth

Although short on details, the announcement signals that Washington is willing to go beyond traditional diplomatic measures and will seek to drain cash from Maduro’s government, which is already struggling under an unprecedented economic meltdown.

Such a move would significantly strengthen the hand of Guaido, who swore himself in as interim head of state on Wednesday with the support of Washington and nations around the region.

“What we’re focusing on today is disconnecting the illegitimate Maduro regime from the sources of his revenues,” national security advisor John Bolton told reporters at the White House.

“We think consistent with our recognition of Juan Guaido as the constitutional interim president of Venezuela that those revenues should go to the legitimate government.”

TIMELINE – HOW VENEZUELA GOT HERE

Bolton added that the process was “very complicated” and that officials were still studying how this would function. Venezuela’s information ministry did not reply to a request for comment.

Guaido, in an interview with broadcaster Univision, said he belived this was “the beginning of the end” for Maduro and he would work to guarantee humanitarian aid and implement new economic measures to rachet up pressure.

“Our challenge is to secure free elections, and we want them as soon as possible. But we are living in a dictatorship,” he said, from an undisclosed location.

Guaido’s swearing-in was the opposition’s boldest challenge yet to the long-ruling Socialist Party and has given Maduro’s adversaries an unprecedented diplomatic platform to press for change in a nation dogged by hyperinflation, rising malnutrition and political conflict.

But Guaido now leads what amounts to a shadow government disavowed by the armed forces and with no influence over day-to-day administration such as importing and distributing food and medicine.

The 35-year-old industrial engineer said he had spoken on Thursday by telephone with supportive heads of state from around the world.

In the Univision interview, Guaido repeated his proposal of future amnesties to officials and military members who disavowed Maduro, even saying the offer could be extended to government ministers and to Maduro himself if they willingly left power.

Guaido’s ascent was greeted with excitement by investors holding Venezuela and state oil company PDVSA bonds, which hit their highest level since 2017 despite being almost entirely in default.

Oil revenues are crucial to the already crumbling Venezuelan economy and routing that money away from Maduro as the United State seeks to do would be a serious blow.

The U.S. State Department on Thursday ordered some U.S. government workers to leave Venezuela and said U.S. citizens should consider leaving the country.

WHO IS LEGITIMATE PRESIDENT?

Guaido took the helm of the National Assembly on Jan. 5 with a call for the armed forces to recognize Maduro as a “usurper” after his May 2018 re-election, widely viewed as fraudulent.

Backing for him has come principally from the Western hemisphere. Venezuelan allies including Russia and Turkey – both important commercial partners – criticized Guaido’s rise as a sign of U.S. interference.

The European Union, which has imposed sanctions on Maduro’s government, noted that Venezuelans had “massively called for democracy and the possibility to freely determine their own destiny,” but stopped short of recognizing Guaido.

Maduro, in a rambling speech, dismissed Guaido’s inauguration and said he himself remained the country’s legitimate leader.

He has relied extensively on the military to maintain power amid annual inflation of nearly 2 million percent and an exodus of Venezuelan refugees into neighboring countries.

Guaido has said Maduro’s Jan. 10 inauguration to a second six-year term amounted to a usurpation of power. The vote was boycotted by Venezuela’s main opposition parties, with Maduro’s two most popular rivals banned from running and Socialist Party aggressive campaigning opponents called vote-buying.

Guaido and allies argue that the presidency is vacant as a result and that the constitution calls for the head of congress to assume the interim presidency in such a situation.

That still leaves Guaido struggling against a state unwilling to recognize him and security forces that could jail him, as they did his mentor Leopoldo Lopez – who is under house arrest for leading anti-Maduro protests in 2014.

“Can he name ministers? Ministers of air? Phantom ministers?,” asked Maduro during a speech before the Supreme Court. “Is he going to name commanders of military units? Will the armed forces obey his command? Never.”

Protesters clashed with security forces on Wednesday night around the country and in both affluent and working class areas of Caracas, with some demonstrations spilling over into looting.

A total of 14 people have been killed in violence linked to this week’s protests, according to local rights groups.