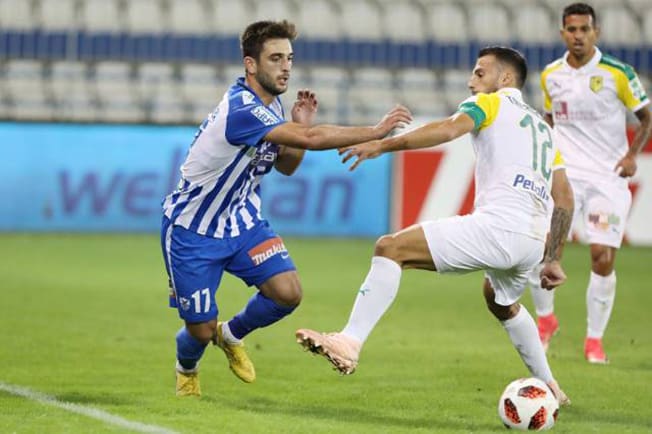 Round 18 of the Cyprus football championship sees the clash between AEK and Anorthosis at the Arena stadium in Larnaca standing out from the rest of the fixtures.

Second-placed Apollon are favourites for an easy win against Doxa Katokopias while Nea Salamina face last but one Ermis Aradippou.
Bottom side Pafos FC are at home to much-improved Omonia, while Enosis entertain third-placed AEL in Paralimni.

The final game of the round will take place on Monday between leaders Apoel and Alki.

With the top three teams all but ensured of a top-six finish the remaining three spots will be fiercely contested between four teams, as just five points separates them.

This makes the AEK vs Anorthosis game all the more important as both sides want to maintain their advantage especially as more close to call games are expected in the final four rounds of the championship.

AEK’s newly-appointed coach, Imanol Idiakez, seems to have waved the magic wand in his few days at the club as in his first game in charge his team put five past Doxa Katokopias following a seven-game winless run that also resulted in the sacking of his predecessor Antoni Iraola.

Idiakez stressed the importance of the game against Anorthosis and the need to stay focused throughout the 90 minutes against a team that has just one defeat away from home.

His two regular front men, Apostolos Giannou and Florian Taulemmeuse, are both unavailable, but former Barcelona, Valldolid and Grasshoppers striker Jeffrén, a winter signing, is expected to make his debut for the Larnaca team.

Anorthosis’ woes this season continue after Enosis dumped them out of the cup on Wednesday leaving a third-place finish their only chance of European football next season.

Jurgen Streppel, their coach, is walking a fine line, and another loss may signal the end of his brief tenure at the Famagusta club.
He has been criticised on many occasions for his team selections but a lot of blame must lie with his key players who have failed to perform according to their true abilities.

After being docked six points by the Cyprus Football Association for fielding an ineligible player that sent them to the foot of the table, Pafos FC have a mountain to climb to avoid relegation.

With games running out, only a win against Omonia can see their chances of survival getting a boost.

Omonia, like Anorthosis, have been knocked out of the cup and are currently in seventh place, with their only realistic target being a top-six finish.