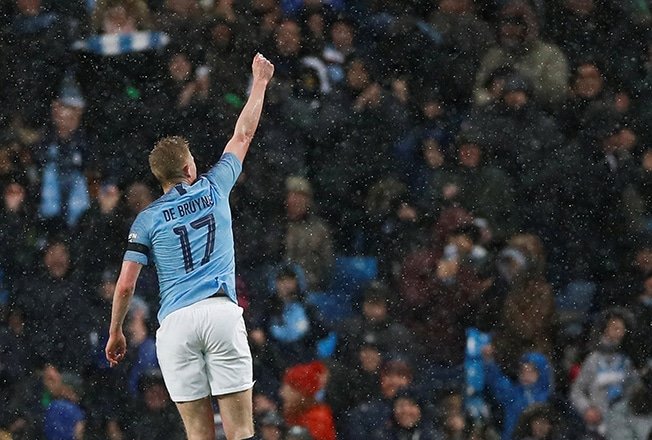 Manchester City maintained their interest in four competitions by easing into the FA Cup fifth round with a commanding 5-0 win over Burnley.

Pep Guardiola’s side won at a canter at the Etihad Stadium with Gabriel Jesus, Bernardo Silva and Kevin De Bruyne strikes, a Sergio Aguero penalty and a Kevin Long own goal.

Burnley, who lost to City by the same score in October, were again poor but the game might have been different had Matej Vydra taken a gilt-edged chance when City led only 1-0 after half-time.

Instead, that merely served as a wake-up call for City, who had barely needed to exert themselves in the first half.

The quality of City’s squad allowed Guardiola to keep his word to field a strong side despite holding back Aguero, Raheem Sterling, Leroy Sane and David Silva, who were all substitutes.

De Bruyne ran the game from the middle of the field as he continues to build up his match fitness after the injury problems of the first half of the campaign. The hosts created chances at will without having to get much above walking pace themselves.

Burnley, who made seven changes, offered little and were clearly focused on Premier League survival. Goalkeeper Nick Pope, preferred to Tom Heaton and Joe Hart for this match, was their busiest player.

The game took some time to warm up, with the most entertaining moment of the early stages coming when Kyle Walker collided with – and snapped – a corner flag. Play was delayed while referee Graham Scott first tried to fix it and then called for a replacement.

When the game resumed, City asserted control and Jesus was inches away from turning in a dangerous low ball from De Bruyne. Pope saved with his feet from Bernardo Silva and palmed away a Danilo strike.

A goal seemed inevitable and it came after some nimble footwork from Jesus, who raced onto a chipped pass from Danilo, cut back from the byline and fired home a low shot after 23 minutes. Ilkay Gundogan also had a shot deflected wide.

Despite being outplayed, the Clarets were almost gifted a way back into the game early in the second half when Nicolas Otamendi carelessly gave the ball away to Vydra. The Czech was allowed a free run at goal but missed the target as Ederson advanced.

That forced City to up the tempo and Bernardo Silva made Vydra pay for his miss as he latched onto another great De Bruyne pass, skilfully cut inside and blasted through Pope’s grasp.

De Bruyne’s dominance continued and the fourth was also down to him as he raced into the area and squared the ball that rebounded into the net off Long.

Long then compounded his misfortune by dwelling on the ball too long and holding back the onrushing David Silva. Aguero completed the rout from the spot.

Elsewhere, Matt Doherty’s last-gasp header rescued Wolves after they hit back from 2-0 down to force an FA Cup replay against League One minnows Shrewsbury.

Finally, Watford saw Newcastle off 2-0 thanks to goals from Andre Gray and Isaac Success.