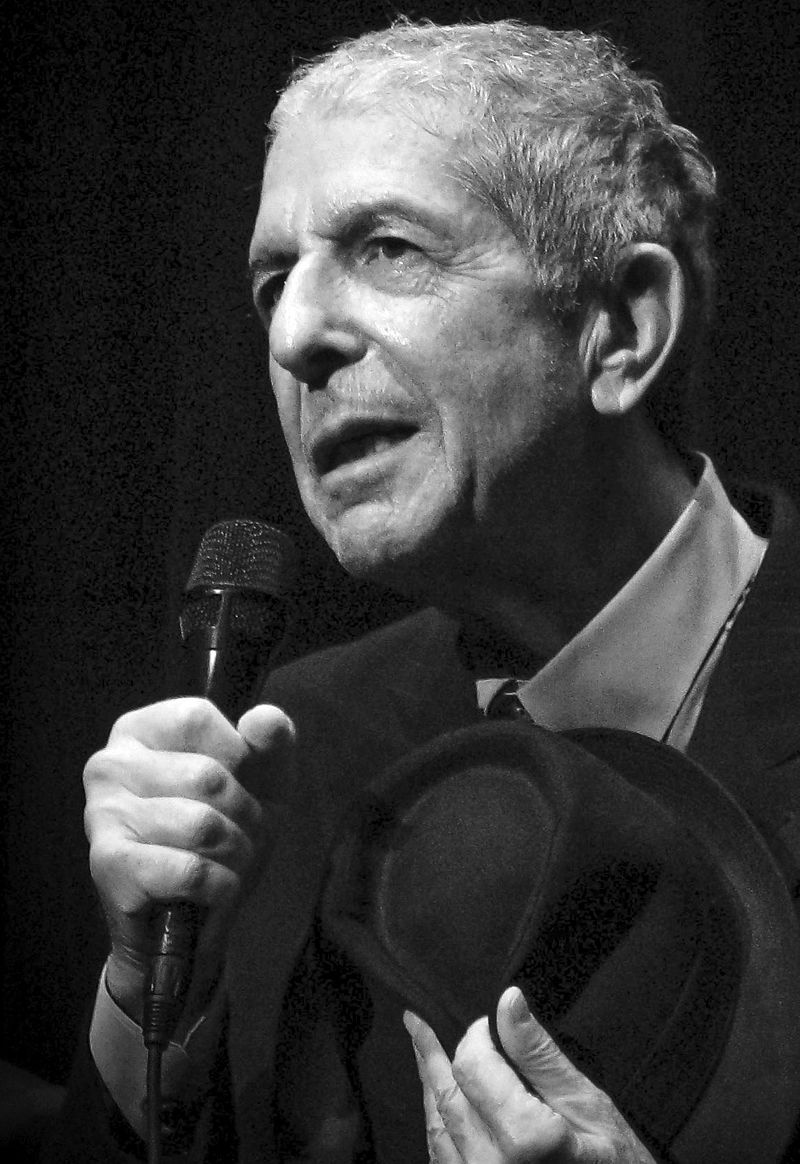 Leonard Cohen, the master voice of doom and resurrection

Recently, as I watched the news on the small screen: the political antics still going on in the US, UK, Europe and the world, but especially the Brexit and Trump pantomime; the ultra-right spreading its wings; taking the odd short stroll down and up the streets of London; and sitting at every café for the dark stuff, I was struck down by something not exactly physical. I started hearing voices.

Beguiling, emotional and passionate voices of doom and resurrection – punctuated with Leonard Cohen lyrics – keep humming in my head. Rhythmically, the voices recite the confusing and conflicting world of today. They present as Muses of knowledge and rationality one moment; and, the next, as seductive Sirens luring me with their beauty to follow them to greed, corruption, destruction and death.

One minute, I hear them say, “I’ve seen the future, brother: it is murder.” And the next, they serenade me with visions of hope and peace: “Dance me to your beauty with a burning violin, dance me through the panic ‘til I’m gathered safely in, lift me like an olive branch and be my homeward dove.”

When I am mesmerised enough, they warn me that “The blizzard of the world has crossed the threshold and it has overturned the order of the soul”; that my “private life will suddenly explode, there’ll be phantoms, there’ll be fires on the road.”

They are enticing me to have my home fortified and protected from good-doers, the homeless, the poor, the beggars, the immigrants and anything liberal. They are a danger to safety, to the nation, its wellbeing and prosperity. I need security, they advise. I need borders and surveillance. Most of all I need that wall.

I try to resist the seduction by telling these voices, “You can add up the parts but you won’t have the sum. You can strike up the march, there is no drum.  Every heart to love will come but like a refugee.”

But the voices hit back.  They tell me not to be sentimental. Democracy rises “From the wars against disorder, from the sirens night and day, from the fires of the homeless, from the ashes of the gay”.

They gratify me with dazzling visions. You need power. Power is democracy. Follow us, the voices whisper suggestively. Just say it: “I’m your man” and we will give you “absolute control over every living soul”; “Give [you] back the Berlin wall; Give [you] Stalin and St. Paul”.  They flatter me that power suits me: that it does wonders for my big Napoleonic ego; and that it is my “absolute right to declare a national emergency [or as some folk say, exercise my nuclear option]” to restore order (Donald Trump, 10/1/19).

But who will pay for the wall, I dare ask.  The people will pay the 5.6 billion dollars, the voices respond. And why should you care for 800,000 idle federal employees?

But they are ordinary people, I answer.  Many may lose their jobs and their homes. Their plight will have a multiplier effect on the US economy which will hurt many others.  They will not be able to put food on the table for their families.

You do not buy democracy by feeding everyone, the voices answer sharply. Sacrifices are required. Your security is at stake. You need protection. Steel and concrete must be stuck high up to keep those criminals, drug addicts and pushers, gays, human traffickers, rapists and so-called refugees out of the country.

Now, that is a puzzle, the voices reply. But that is OK too.   Give orders to have them shot down for trespassing. Do not be fooled.  Democracy needs an iron fist to survive. It “is coming to America first, the cradle of the best and the worst. It’s here they got the range and the machinery for change and it’s here they got the spiritual thirst”.

With the same “spiritual thirst”, the voices continue, I should want to free the great British Isles from the European invasion; to stop those using precious NHS resources, taking up jobs and misusing the welfare system.  Grasp the nettle of Brexit and leave, they order.

A high price is always paid for freedom, they add. So who cares if Jaguar Land Rover, Nissan and others are shedding thousands of British jobs because of uncertainty or that Japan is telling you that they and the world at large do not want to see a hard Brexit? The people have decided.

What people? I ask. The vote was nearly 50/50. The nation is divided. The Brexit deal crushed. Why not consider a new people’s vote? Never! The voices shout back. It will be a “catastrophe and an unforgivable breach of trust in British democracy” (Theresa May, 13/1/19). The shepherd must lead.

But the shepherd and the flock have lost their way and are out of control, I say. The flock is frightened and feels unguarded.  It is heading for the cliff edge. Can’t the shepherd stop and reconsider? Stop looking for the unicorn. Save the flock and the treasure.

You do not understand, the voices reply.  Democracy needs new pastures to graze. The people are the sacrificial lamb for reaching them. Civilisation rises out of fire and ashes.

We can be civilised without the fire and the ashes if we try to reason, I proclaim.

You cannot reason, I hear the answer. Peace is only the survival of the fittest. Spend on more weapons. Put the arms race everywhere. Colonise space and fill it up with hardware too. Your enemies must know you are untouchable.

Alas! I utter in dismay. “The wars they will be fought again. The holy dove be caught again, bought and sold and bought again, the dove is never free.”

You should at least try “Like a bird on the wire…to be free”, the voices retort.

They cajole me to join the example of Donald, Theresa, Jeremy, Vladimir, Tayyip, Rodrigo, Mateusz, Viktor, Mateo, Jair and others by locking myself in an echo chamber. When I speak and give orders, I hear only my own voice resonating, blocking out others. It  makes me feel righteous and perfect.

I spoke to the doctor about my condition.  He shook his head and said I have Donaldis Trumpitis Brexitisis.  Apparently, it is the ailment of our times. Sadly, “There is no cure”, the doctor adds.  You “just have to quit.” There is “Nothing left to do when you’ve got to go on waiting…for the miracle to come”.

As I search for the truth walking the streets of London, I must confess,

“I’m sentimental, if you know what I mean;

I love the country but I can’t stand the scene.”

Andonis Vassiliades is an Emeritus Professor.  The quotes, unless otherwise stated, are lyrics from Leonard Cohen’s rich collection. Any political or other interpretation attached to these lyrics is entirely my own and does not represent the views of the songwriter or his estate or his publishers in any way

Britain has martial law option under Brexit no-deal, but no plan to exercise it -minister