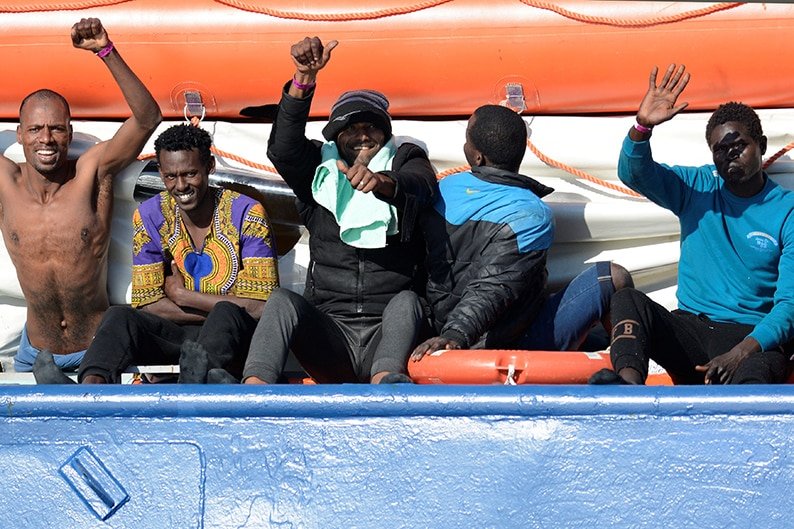 Migrants react as they rest on board the Sea Watch 3

The Netherlands refused on Monday an Italian request to take in 47 migrants on a humanitarian ship that is being blocked from Italian ports, saying there was a need to distinguish between genuine refugees and economic migrants.

The Sea Watch 3, run by a German humanitarian group and flying a Dutch flag, picked up  the migrants from a rubber boat off the Libyan coast more than a week ago.

Italy’s Deputy Prime Minister Luigi Di Maio, leader of the 5-Star Movement, said the ship should go either to France, which he has accused of shirking its responsibilities, or to the Netherlands.

The Dutch Justice and Security Ministry, which oversees immigration policy, said it would not take in any migrants from Sea Watch until there was a long-term agreement on how to distinguish refugees from economic migrants.

“Those who are not entitled to international protection need to be sent back immediately on arrival at European borders,” it said in a statement.

“Without a clear perspective for such a structural solution, the Netherlands will not participate in ad hoc measures for the disembarkation.”

It is the second time in a month Sea Watch has been stranded at sea with migrants and no safe port. The last standoff ended after 19 days and an agreement among eight EU countries, including Italy, to take in the migrants.

The Netherlands, which took in hundreds of thousands of migrants in the 1960s and 1970s to work as labourers, has adopted one of the tightest immigration policies in Europe following a public backlash.

New wing at Larnaca general to open this year