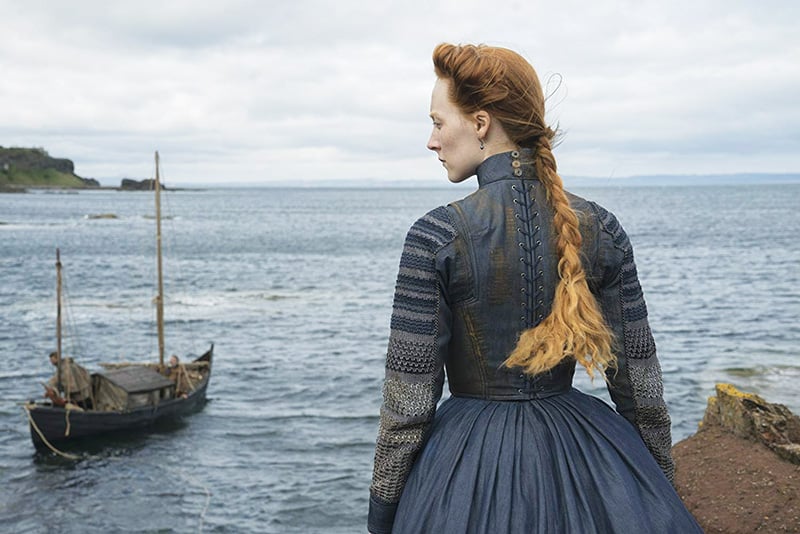 Aristocratic life in the Elizabethan era – that period in the latter half of the 16th century during Queen Elizabeth I’s reign – is ripe with cinematic fruit for the plucking. The courts are a production designer’s dream come true – the splendour of the costumes, the highfalutin hair styles, the endless layers of makeup; all perfect props for resplendent image-making. And that’s to say nothing of the drama! The intrigue, the paranoia, the scheming and plotting and fear of losing your head or your crown… what more could you ask for, really? The question, then, is how on earth did Josie Rourke manage to make Mary Queen of Scots, starring two wonderfully talented actresses, so flat and colourless?

Part of the answer lies in Rourke’s blank resume, at least when it comes to feature films. She is known mostly for being a stage production director with Mary being her first foray behind the camera. The awkwardly rushed pacing of the film and a narrative that stumbles through a 26-year timeline like an insolent court jester makes that quite obvious. Depending on how well you know your Elizabethan history, you’ll know just how interesting the feud between Catholic Mary Queen of Scots (a majestic Saoirse Ronan) and Protestant Queen of England, Elizabeth (an uglified Margot Robbie) was. Newly returned to Scotland from France after her husband’s death, Mary wants what she and thousands of Catholic subjects believe is her birthright to have: the crown of England. Her dream is to one day unite England and Scotland under one rule so that there may be peace. Elizabeth, being a Protestant and devoting her heart body and soul to the English throne, isn’t exactly thrilled to hear that Mary has returned.

A long-distance power struggle ensues mixed with envy, respect, hatred and fear. Elizabeth’s council led by William Cecil (Guy Pearce) constantly try to come up with ways to undermine and get rid of Mary, while Mary’s half-brother James (James McArdle) initially hands the Scottish reins back to her upon her return but very quickly becomes the enemy after she defiantly refuses to accept an arranged marriage with Robert Dudley (Joe Alwyn) and marries her first cousin Henry Darnley (Jack Lowden) instead. Amidst all this hubbub, Presbyterian minister John Knox (a heavily bearded David Tennant) spits misogynist fire and brimstone against Mary, rallying people against her. Chaos ensues, very contrived, tonally imbalanced, laughably frustrating chaos.

Come for the costumes and the hair (deservedly nominated for a couple of Oscars, respectively), stay for Margot Robbie’s ferocious performance as Elizabeth (coupled with her Oscar-nominated portrayal of Tonya Harding in I, Tonya, this performance proves Robbie has mastered the art of pained desperation), and leave confused, scratching your head at why Mary Queen of Scots – depicting one of the most intriguing chapters of Elizabethan history – is so infuriatingly forgettable.

“Men can be so cruel,” Elizabeth quips at one point as she lies in bed with Dudley, ignoring (or not wishing to think about) the fact that she has the power to curtail that cruelty. Her love of power, of course, trumps any kind of ill-will she harbours against all men, but these very black-and-white gender generalisations (there are loads of them) support the most important theme for Rourke and screenwriter Beau Willimon. (The awfully shallow and lazy dialogue throughout, by the way, keeps begging the question: what happened to the Willimon who was directly responsible for the most captivating episodes of Netflix’s House of Cards?) That theme can be boiled down to: men are terrible, weak, manipulative, prone to getting easily killed off while women are strong, admirable, justified and prone to being martyrs. The subplot involving David Rizzio (Ismael Cruz Cordova) takes so many historical liberties that the overall agenda comes into clear focus and is totally disruptive.

The rectangular relationship between Mary, Scotland, Elizabeth and England, together with the religious fervour that drove both women – in other words, the very essence of what makes this historical period so rich and compelling – takes a dusty backseat to contemporary agendas that box-tick trends and desperately try to virtue signal to a woke audience. Therein lies the movie’s biggest sin. Not in Mary’s bizarrely capricious personality (she continually insults and exalts Elizabeth in the same breath), Guy Pearce’s god-awful accent, or the ungodly amount of screen-time devoted to Mary’s team of dull-as-doornails handmaidens. No, the gravest sin is in the very obvious and tired attempt of twisting the past, turning fascinating historical figures into one-dimensional puppets and creating a shallow story out of source material that has such deep potential.

New wing at Larnaca general to open this year

Half of it sucks, half of it is great

Shows we love: The Wire

Binge worthy shows: what to watch as lockdown continues