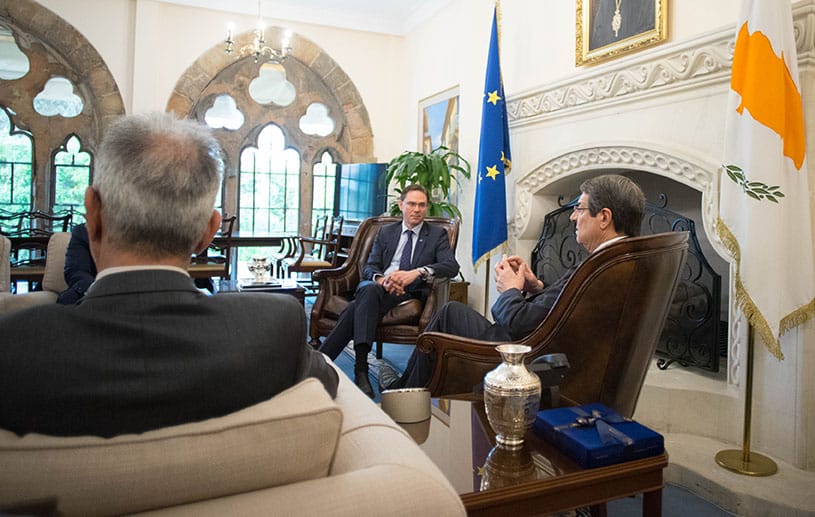 Katainen, on a two-day visit to the island, called for a standardised process across the bloc to ensure proper vetting of non-EU nationals seeking to acquire residence permits or passports.

“Whether we like it or not this will be an issue at the European level in the future,” Katainen said addressing a joint session of the House finance and foreign affairs committees.

“Many member states are very concerned about this. There are also negative examples that golden passports have been provided to persons who have had some unclear activities in some countries,” he noted, alluding to money laundering and tax evasion.

“We need a clearer common understanding on this in order to improve transparency. All member states share the view that we cannot do anything that would jeopardise security, we cannot support money laundering, we cannot support tax evasion and that’s why we need to discuss with the member states how do we improve transparency because is the best guarantee that we understand each other and that the system is fair and secured,” Katainen told MPs.

Although his visit to Cyprus revolved primarily around the ‘golden passports’ issue, the EU official took the opportunity to comment on Brussels’ vision for the EU project.

“In two years’ time the EU for sure will be more integrated than it is today, but people don’t know this enough,” he announced.

Katainen went on to sound off Brussels’ talking points on Russia’s alleged involvement in elections and referendums such as Brexit, as well as the United States’ stance over climate change, describing these as “challenges” that the bloc must face.

“However, the EU is also challenged from within,” he noted.

“Our union is based on liberal democratic values but currently unfortunately we have some political leaders, for instance in Poland, in Hungary in Romania who are putting liberal democratic values in question, the whole EU, all of our member states are based on the values of human dignity, freedom of press, freedom of expression, human rights, politically free judiciary etc and now these values are put in question. In my opinion this is the biggest threat for Europe.”

He added: “There’s no EU if we don’t have a joint value basis.”

Earlier in the day, Katainen was received by President Nicos Anastasiades.

Following that meeting, the government spokesman said Nicosia would not accept Cyprus being “victimised” over its investment activities following last week’s EU report noting that its citizenship-by-investment scheme had insufficient checks on the origins of applicants’ wealth.

The government, Prodromos Prodromou said, is in constant contact with the European Commission, “so that we adopt the best international practices, but also defend our country’s right to apply its own policies, without ever accepting that Cyprus will be victimised internationally because it has investment activity.”

Anastasiades, he said, explained to Katainen that the government had recently tightened procedures for its citizenship-by-investment scheme.

Among these, the hiring of specialised firms tasked with carrying out due-diligence forensics on passport applicants.

“He [Anastasiades] gave reassurances that remarks and recommendations are taken into account, recalling that our country, has, in recent years, also through the programme and voluntarily, adopted rigorous controls on the prevention of transactions that may involve illegal activities whether it is for money laundering or for tax evasion,” Prodromou said.

Like all EU members, Cyprus follows and is under the scrutiny of the Council of Europe’s watchdog on money laundering, Moneyval, and follows its recommendations, “while we have adopted both legislation but also practices.”

At the meeting, Katainen stressed the EU is always open to investment, but at the same time there should be shared information among countries and attention to investment in strategic areas, “whether we are talking about telecoms or for security systems.”

Later, the EU official saw finance minister Harris Georgiades. In statements, they both sought to play down the matter.

Katainen said the European Commission is not targeting Cyprus or any European country for their passport schemes. What is desirable, he added, is a system that addresses the concerns expressed by certain EU member states.

Georgiades said Cyprus is ready to work with the Commission and its EU partners, providing full data on its programme in order “to deal with any warranted concerns that may exist”.

On Sunday, Katainen stated the European Commission has established an expert group to consider how to create fully transparent rules on the granting of EU citizenship by member states in order to avoid tax evasion, money laundering or security threats.

In a report last week, the European Commission had warned that programmes of EU states, including Cyprus, to sell passports and visas to wealthy foreigners could help organised crime groups infiltrate the bloc and raise the risk of money laundering, corruption and tax evasion.

The EU report on so-called “investment migration” highlighted shortfalls in the Cypriot and Maltese schemes which do not sufficiently check the origins of wealth of individuals and do not allow their easy identification.

Cypriot officials countered that the report did not portray an accurate picture as it failed to take into account the changes made by the government in May last year.

Whereas the report did reference the changes in passing, due to time constraints these had not been included in the final text.

Katainen’s itinerary also included participating in an event in Nicosia titled ‘A citizens’ dialogue on the future of Europe and tomorrow’s megatrends’.

As West turns on him, Venezuela’s Maduro flexes military muscle