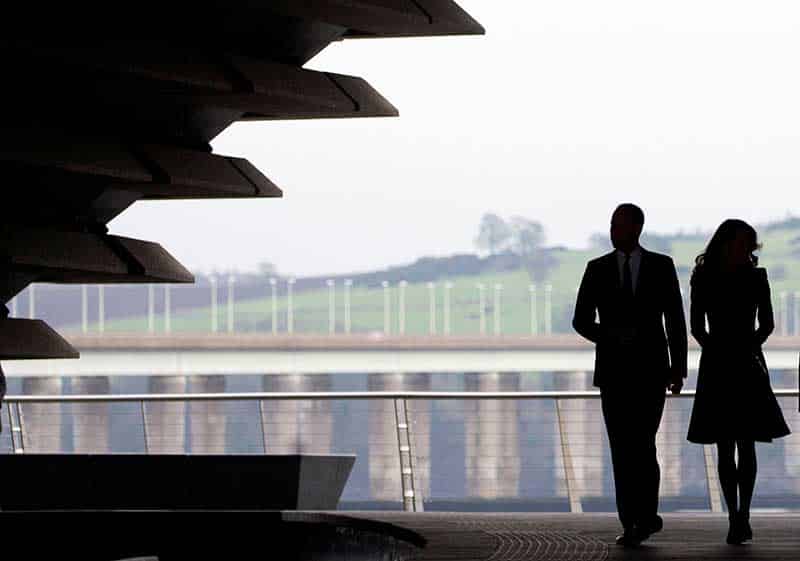 Silhouettes of Britain's Prince William, Duke of Cambridge and Catherine, Duchess of Cambridge are seen during their visit to the V&A Dundee

Britain’s Prince William and his wife Kate visited a gleaming new design museum on Tuesday as well as a factory facing closure, and praised Dundee residents for pulling together in difficult times.

They met staff at Dundee’s Michelin factory, an economic mainstay of the Scottish port for 40 years. Workers are trying to reinvent the factory after news late last year that tyre production is to cease.

“When a community faces uncertainty, people feel more optimistic when leaders such as yourselves work together,” William told a group of senior staff at the factory.

William, second in line to the throne, and his younger brother Harry have been changing the once-staid approach of the royal family to public matters with a more candid approach on issues such as mental health and the environment.

“Because of the collaborative approach adopted by the people in this room, I personally am optimistic that a good outcome is possible,” William said. “You have already reached agreement on developing the site into a manufacturing, recycling and low-carbon transport hub.”

A source at the royal household said the couple wanted to make the important point that those who are facing uncertainty need to be included, not just those responsible for success.

Earlier the Duke and Duchess of Cambridge, who met while studying at Scotland’s University of St. Andrews, officially opened the Victoria & Albert Dundee, an eye-catching design museum which looks like the bow of a ship, on the mouth of the River Tay.

They drew a large crowd outside the building’s angled structure despite the chill of the riverside in winter.

Kate, a patron of the V&A Museum, wore a green Alexander McQueen tartan coat dress while William wore a blue suit alongside her.

Kate said she was “captivated by the breath-taking architecture and the sheer range of design on display” at the first offshoot of the Victoria and Albert Museum outside London.

Japanese architect Kengo Kuma, currently designing Tokyo’s 2020 Olympic stadium, configured the building to resemble two hulls side by side, in a nod to the port’s shipbuilding history.

The museum houses treasures such as a salvaged tearoom designed by Charles Rennie Mackintosh and a tiara of rose-cut diamonds with a pair of wings which tremble slightly when worn.

“I hope that this museum will serve as an inspiration to others, by showing how great things can be achieved when different communities all pull together,” Kate said.

The couple’s words about working together echoed those of William’s grandmother, Queen Elizabeth, who urged divided lawmakers earlier this month to seek common ground over Britain’s impending exit from the European Union.