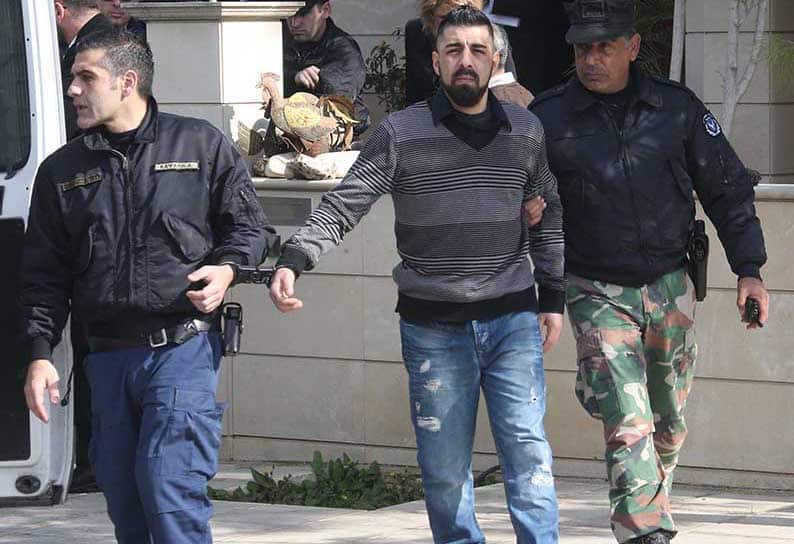 The main suspect in the double murder of Giorgos Hadjigeorgiou, 60, and his wife Dina Sergiou, 59, who were stabbed to death in their home last April, admitted to the crime in the testimony he had given to the police following his arrest days after the killings, Nicosia criminal court heard on Wednesday.

Loizos Tzionis, 33, along with three other defendants, his 22-year-old friend Marios Hadjixenophontos, 21-year-old Sarah Shams and Tzionis’ 23-year-old half-brother, Lefteris Solomou, was accused of killing the couple in what appeared to be a robbery-gone-wrong on the night of April 18-19 last year.

The couple were found in their bedroom stabbed multiple times. All four have pled not guilty to the seven charges against them.

Tzionis initially admitted all charges except that of burglary but later changed his plea.

During the trial on Wednesday, the case investigator read Tzionis’ testimony after his arrest where he had admitted to stabbing the couple to death and apologised, asking leniency from the court.

Hadjigeorgiou’s sister was among those in court.

In his testimony, Tzionis, said that he had gone to the couple’s home with Hadjixenophontos to steal the safe he knew was in the house. The money and jewellery he believed to be inside was to be used to pay of the two men’s debts.

Tzionis said he was carrying a knife.

He said that when the cocaine started wearing off, he started feeling stressed. He said he then found out that the safe was no longer where he thought it was.

At that moment, he said, he heard a woman screaming from the next room and tried to enter quietly into the room but was so nervous that he was bumping into things.

He saw a woman lying on the bed who got up and went to his side and that he told her to be quiet and apologised.

He then tried to silence her by putting his hand over her mouth and she tried to push him. Tzionis said he then remembered the knife he was holding. “The first touch was as if she came to the knife, and she fell face down on the bed,” his statement said.

He said that at that time he did not remember what he did or even noticed blood on the woman. “But I did realise at some point that she was lifeless.”

The testimony said that he then heard a man’s voice from the corridor asking “what is happening?”

Then Hadjigeorgiou entered the room and saw his wife and headed towards him trying to catch Tzionis by the neck.

“I felt his strength, and we fought hard … Because he was taller and heavy, he threw me down.” He said they both knelt and he stabbed the victim in the belly. According to his testimony, the victim tightened his grip around his neck and he continued to stab him feeling that he was threatened. The accused said the victim only told him to stop stabbing him.

He said that he then went to the room of their teenage son, who begged for his life and told him to take all the money he could find in the house and leave.

Tzionis said he told the boy that he thought he had killed his parents and that he wouldn’t harm him. He asked the boy to open the door to Hadjixenophontos and then locked him in the basement.

After his arrest and testimony, Tzionis told police that he felt relieved he told them everything.

“I apologise for what I’ve done and I’m asking the court to be lenient,” Tzionis said at the end of his testimony.

The trial will continue on February 8 and 9.