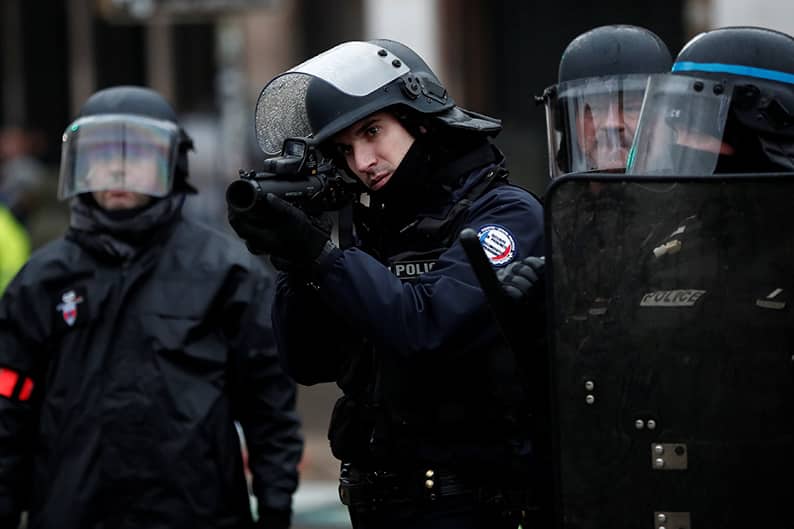 A French policeman in riot gear holds a flash-ball gun as protesters wearing yellow vests take part in a demonstration by the "yellow vests" movement at Place de la Bastille in Paris, France

French lawmakers have backed a bill banning protesters from hiding their faces during demonstrations, reinforcing President Emmanuel Macron’s efforts to push back against violent members of the “yellow vest” movement.

The bill, which is expected to secure approval next week, also grants police greater powers to extract potential trouble-makers from demonstrations.

Addressing the lower house National Assembly, Interior Minister Christophe Castaner urged members to “stop the brutes … (who listen) only to their hunger for chaos”.

Opponents of the “anti-casseurs” (anti-hooligan) bill accused the government of impinging on civil liberties, with the debate exposing divisions within Macron’s party, which has a comfortable majority in parliament.

The tactics used by police around the country have come under scrutiny, in particular the firing of “flash ball” riot guns, which have caused serious injuries, including at least one person blinded in one eye.

By forbidding protesters from hiding their faces, the legislation aims to make it easier to use facial recognition technology to snare rioters. Anyone who masks their face could face a year in prison and a 15,000 euro fine. Critics say it will be impossible to enforce.

The “yellow vest” movement erupted in November as a grassroots protest against fuel taxes but has morphed into a broader revolt against inequality and Macron’s presidency. It takes its name from the fluorescent vests motorists in France carry in their cars.

Rioters ran amok in Paris during the early street protests, torching cars, smashing luxury boutiques and defacing the Arc de Triomphe. It was among the worst violence the capital has experienced since a 1968 student uprising.

Violent clashes with police have persisted on the fringes of weekly marches in Paris, Toulouse, Bordeaux and other cities.

Lawmakers have now approved four key measures within the bill ahead of a vote on the overall package expected on Tuesday.

Since taking office in 2017, Macron has been criticised for curbing civil liberties. In early 2018, his government tightened asylum rules after a tense debate in parliament that led to cracks within his majority.

Charles de Courson of the Union des Democrates, Radicaux et Liberaux party (UDRL) told parliament it was unacceptable to deny individuals the right to protest because their behaviour was deemed a threat to public order.

“Where are we heading? You might think we’ve returned to the Vichy regime!” he said, referring to the wartime administration in unoccupied France that collaborated with the Nazis.

Unemployment drops to 8.8 per cent in December 2018