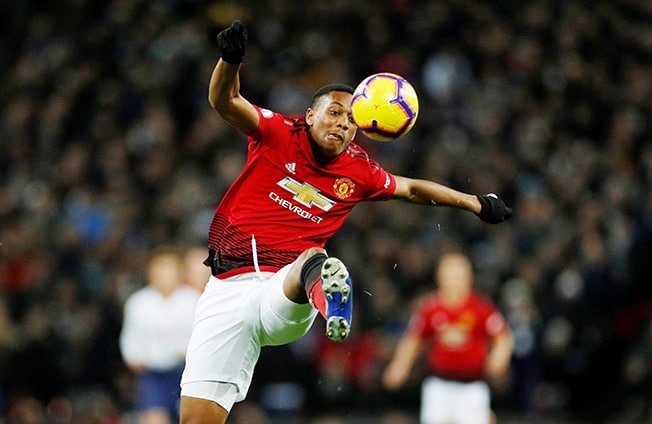 Anthony Martial has signed a new and improved deal with Manchester United until at least 2024 as Marouane Fellaini closes in on a move to China.

Jose Mourinho was ready to sell the Frenchman over the summer, when Fellaini, one of his most trusted lieutenants, was rewarded with a new deal until 2020 with the option of a further season.

But the players have witnessed a marked change of circumstance recently.

Fellaini is now edging closer to moving to China after United reached an agreement with Shandong Luneng, while Martial has signed a contract extension until 2024 with the option of a further year.

“I am loving my time at this club,” Martial said, having posed for photos with caretaker manager Ole Gunnar Solskjaer.

“From the day I joined I have been made to feel part of the United family and I have been incredibly humbled and overwhelmed by the warmth and love of our fans, who continue to amaze me with their support.

“I would like to thank Ole and his coaching staff for their belief in me and for helping me to take my game to the next level.

“This club is all about winning trophies and I am sure the next piece of silverware is not that far away.”

Martial signed from Monaco for an initial £36 million in 2015 and became the most expensive teenager in the world – but until recently it appeared a matter of when rather than if he would leave Old Trafford.

The forward’s agent Philippe Lamboley said in June that his client wanted to leave United and Press Association Sport understands that Mourinho was willing to sell him in the summer – a time when the Portuguese fined him for the way he left their American pre-season tour for the birth of his second child.

But Martial has kicked on this term and questions over his happiness have disappeared since the departure of Mourinho – a manager whose approach could scarcely be more different to Solskjaer’s.

“Anthony is one of those naturally gifted players that any coach would love to work with,” the caretaker boss said.

“For a young man, he has a good footballing brain which, when coupled with his exceptional talent, makes for a player with an exciting future ahead of him.

“This is the perfect club for Anthony to progress his development as a top-class forward and we are all delighted he has signed a long-term deal.”

While Martial commits to the club, Fellaini is set to end his five-and-a-half year stay at Old Trafford as Press Association Sport understands that United have reached an agreement in principle regarding his sale to Shandong.

It is understood that the Belgium international has already passed a medical, leaving paperwork and final terms to iron out.

Fellaini posted an Instagram photo of himself at an airport on Thursday morning, with the phrase “let’s go” written across it.

Chinese Super League clubs have until February 28 to complete signings and it is understood that another club out there has been monitoring the midfielder’s situation.

Fellaini has only managed 31 minutes since Solskjaer took caretaker charge last month, although a calf injury has ruled him out of recent matches.

Meanwhile, Manchester United have sent Matty Willock on loan to Crawley for the rest of the season.

After temporary spells with Utrecht, St Johnstone and most recently St Mirren, the 22-year-old has joined the Sky Bet League Two side until the end of 2018-19.

Crawley’s director of football Selim Gaygusuz said: “We are really excited to have such a young and versatile player like Matty joining us for the rest of the season.

“Having come from Manchester United, we know that he has been trained by some world class coaches in multi-million pound facilities, so I’m sure he is well prepared to make an impact for us.”