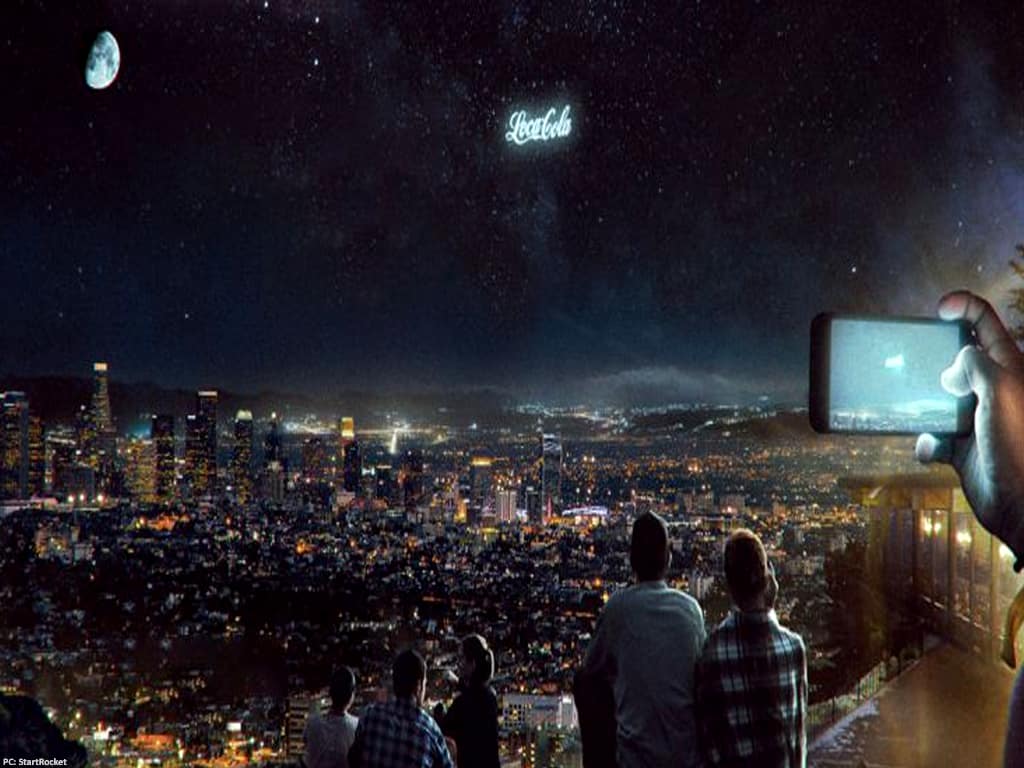 How it could work: a Coca-Cola advertisement lights up the night sky

Some day soon, stargazers searching for answers in the night sky might see the logo of a soft drink company blazing past the Milky Way, or a promotional message from a fast food restaurant.

That at least that is the hope of StartRocket, a Russian start-up aiming to put billboards in space.

The firm plans to turn hundreds of tiny satellites into a massive display visible from earth – something its CEO, Vlad Sitnikov, said would make him the first man to draw in space since the ancient Greeks grouped stars into constellations.

“New ages demand new gods,” the advertising expert told the Thomson Reuters Foundation, adding that the world is no longer ruled by Greek deities but by brands and events.

From space hotels to asteroid mining, the ambitious project is the latest in a series of ventures, often backed by capital and technology from Silicon Valley, looking at outer space as a new business frontier.

But since it was announced in January, the initiative has angered astronomers and raised questions about the need to better regulate who owns the skies – and what is in them.

“It might be a good starting point to re-examine the whole nature of regulation of space activity,” said Christopher Newman, a professor of space law at Northumbria University in Britain.

Sitnikov said he came up with the space billboard idea last year after US-New Zealand rocket propulsion company Rocket Lab launched a shiny disco ball called Humanity Star into orbit, where it remained visible to the human eye for months.

“It was the first time somebody made entertainment in space … and advertising is part of entertainment,” he said via Skype from Moscow.

To work out technical details he teamed up with experts from Skoltech, a Moscow private university, he said.

The team aims to put 200 tiny satellites, known as CubeSats, at an altitude of about 500 kilometres in the lower orbit by 2021.

The satellites, each equipped with a sun-reflecting sail, would fly close together to comprise the pixels of a giant screen that could be switched on and off to display short words or logos.

Besides brands, the system could be used to promote big events, like the Olympics or the Super Bowl, and even deliver emergency messages in remote, cut-off or disaster-hit areas, where normal means of communication would not work, he said.

The project is technically challenging but feasible – provided the company finds investors to foot the bill, Sitnikov said.

Production costs alone are expected to be more than $150 million, he said. The firm plans to charge about $200,000 for every eight hours of advertising.

Since the initiative was advertised with a promotional video earlier in January, Sitnikov said he had received thousands of calls from all over the world, including about a dozen from potential customers.

Yet most messages came from disgruntled citizens, he said.

“People hate me because they think in two years the whole sky will be covered in advertising,” he said, explaining he does not plan for the technology to be that intrusive.

The display would look roughly the size of a half moon and be visible for six minutes at a time, potentially from anywhere.

But to make ads worthwhile the firm intents to target mostly big cities – where light pollution is already high – at dusk or dawn, when people are out in the streets, Sitnikov said.

Among those unhappy with the idea are astronomers, worried that space billboards could impede research.

“Advertising in space seems to be simply a wasteful and expensive way of ruining the view of the night sky,” said Robert Massey, deputy executive director of Britain’s Royal Astronomical Society.

“Light pollution on the ground makes it difficult enough already to see the sky – the stars and the Milky Way – from many locations, and advertising in space is a way of destroying that beautiful vista from the remaining unsullied sites.”

Yet, from a legal standpoint there is not much they can do about it, according to law experts.

Life far from earth is mainly regulated by the 1967 Outer Space Treaty. Drafted during the Cold War, it deals mostly with peace and exploration, and says nothing about advertising, said Newman, of Northumbria University.

“We know that the use of outer space for positioning nuclear weapons is prohibited, but there is no such prohibition on the placing of giant billboards,” he said.

The treaty bans countries from claiming space and celestial bodies for themselves but allows for their use – opening the door to business exploitation by StartRocket and others.

“In principle, activities like that would be permitted,” said Christopher Johnson, space law adviser at the Secure World Foundation, a US think tank.

But StartRocket shows space is about to become much more crowded than it was in the 1960s – and new global rules to balance conflicting interests might soon come in handy, said Newman.

“Space is now becoming an area where everyone has an interest – not just superpowers, but private companies, private citizens, governments; it is an area where there is an ever-increasing amount of activity,” he said.

“There is a need to look at these novel uses of outer space that really people haven’t though of before.”

To date, the United States and Luxembourg are the only countries to have passed domestic legislation on the commercial exploitation of celestial bodies.

By easing investors’ anxiety about their rights beyond Earth, regulations could be a boon for business and research, said Johnson – something Sitnikov accepts.

“All new things have to be regulated when they start to become commodities,” Sitnikov said.

“It would be great if space was to become more a commodity for us … but so far there is no regulation at all.”