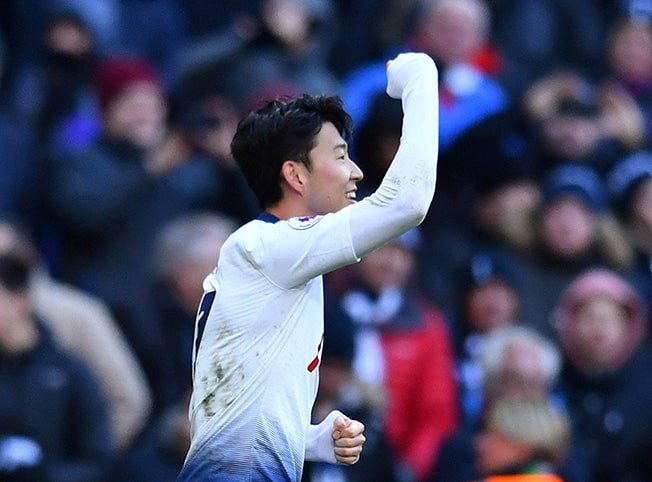 Son Heung-min again came to Tottenham’s rescue as he struck a late winner to send his side second in the Premier League after a 1-0 success over Newcastle.

The South Korean marked his first game back from international duty with the equalising goal in the midweek win over Watford and came up with the goods again as he scored in the 83rd minute to break the Magpies’ resistance at Wembley.

He had goalkeeper Martin Dubravka to thank, though, as the Slovakian allowed Son’s shot under his body when it should have been a routine save.

Spurs were not complaining as it brought reward for their endeavour when it looked like they were going to be frustrated and maintained their strong position in the title race.

They are now above Manchester City in second, four points behind leaders Liverpool, with both teams not in action until Sunday and Monday respectively.

Newcastle put up a good showing, and saw Salomon Rondon hit a post with the header, but could not pull further clear of the relegation zone.

Spurs had also made hard work of league victories over Fulham and Watford, again winning with goals in the last 10 minutes, so were keen to get on the front foot.

They had the perfect chance to gain the early advantage, but Lucas Moura produced a shocking miss in the 16th minute.

He was left in acres of space by a failed Newcastle offside trap and was found perfectly by Erik Lamela’s cross, but the Brazilian planted a free header from seven yards out wide of the target.

The hosts continued to press and came within inches of taking the lead eight minutes later as Lamela met Jan Vertonghen’s cross, but his header crashed into the upright.

The pattern of Spurs attack versus Newcastle defence was set in and Moussa Sissoko tested Dubravka with a low shot, with Davinson Sanchez being muscled off the ball from the rebound with the goal gaping.

When Newcastle did venture forward they were presented with good opportunities and they almost took the lead early in the second half.

Rondon found space and met DeAndre Yedlin’s cross but his header hit the same upright that Lamela found while Hugo Lloris was also forced into a good diving save from Ayoze Perez.

Either side of those two chances, though, Newcastle were reliant on a brilliant piece of defending from Fabian Schar to keep his side level. Christian Eriksen diverted a corner goalwards with a cute flick, but Schar acrobatically cleared off the line with millimetres to spare.

It looked like it was not going to be Tottenham’s day as Fernando Llorente sent a free header over the bar, but Mauricio Pochettino’s men have the habit of rescuing themselves late on this season and again pulled it out of the bag.

Llorente laid the ball off to Son, who was delighted to see his low shot squirm under Dubravka’s body for his 10th Premier League goal of the season.

Stylianides in Cyprus on Monday for “European Solidarity Corps” initiative