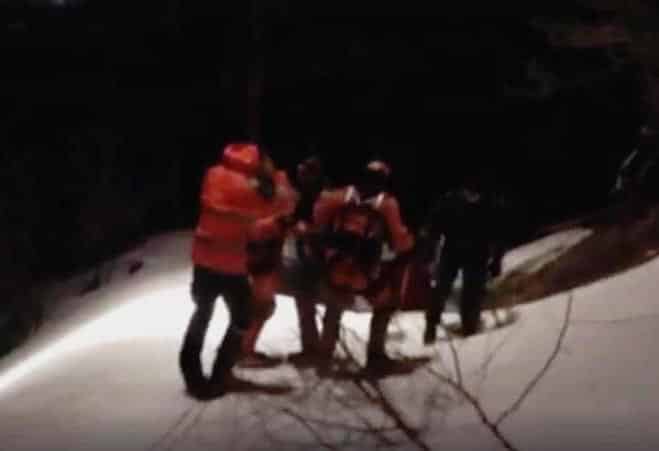 Screen grab from a video of the rescue

Scouts, whose members had to be rescued from the snowy peaks of Troodos, said on Monday that all procedures provided for by their regulations had been followed amid calls for regulating such pursuits.

A large rescue operation had to be mounted on Saturday afternoon when authorities were informed that a group of 17 scouts, aged 12 to 15, with four leaders had started at 2 pm to walk the nature trail from Troodos called ‘Scouts Monuments,’ which leads to Kakopetria but lost their bearings due to snow in the area.

The group was extracted from the area safely late on Saturday night and none of the scouts had been hurt during the incident though a police officer and a volunteer were slightly injured.

In a statement, the scouts organisation said the four guides who took part in the hike had all the necessary qualifications and training.

“The fact that both the children and the officers were exposed to harsh conditions and below zero temperatures for more than 12 hours and managed to cope without a frostbite or a panic incident, shows the high level of training and preparedness to tackle these conditions,” the statement said. “They all worked as a team and achieved the respective results.”

The guides, according to the statement, had walked the particular trail 15 days before and also did a recce as recently as Wednesday, January 30.

The point where landslides blocked the way was located at the final stages, long after the snowed path. The scouts said the landslides appeared to have taken place a couple of days ago.

The huge search operation included members of the police force from Limassol and Morrphou, members of the disaster response unit (Emak), police helicopters, Civil Defence, the National Guard and the forestry department in addition to volunteers.

The Scouts were found at around 9.45pm in a gorge in a remote area and were taken to safety by police helicopter to waiting ambulances in Troodos and at Larnaca airport, from where they were taken to Larnaca and Kyperounta hospitals for check ups before being released.

The incident immediately sparked a debate regarding the abilities of people hiking the Troodos trails, especially in winter.

Fire service chief Marcos Trangolas warned that such expeditions should be regulated before it was too late.

The fire chief said it was not the first time a rescue operation was launched to find people lost on the Troodos trails, as he raised the issues of fitness, knowledge, survival training and so on, especially of guides.

“This kind of activity must be legally regulated … otherwise the time will come when unpleasant events will happen.”

The police officer injured in the operation was taken to Nicosia general before being released while a volunteer had to be rescued after he fell into the gorge injuring both legs. The 45-year-old was kept in Nicosia general hospital for further care.

Public has role in fight against drugs says president