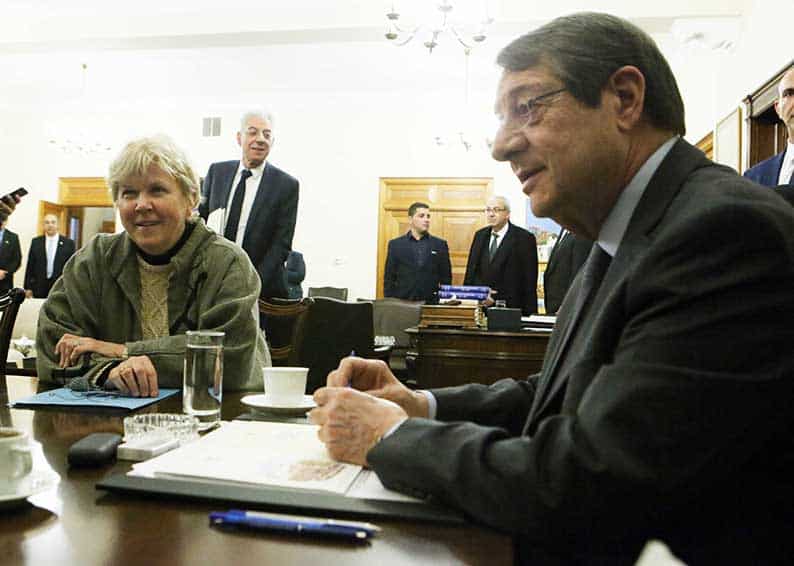 Lute met with Anastasiades for approximately an hour on Monday afternoon, following discussions with Akinci earlier in the day, all part of the efforts to set the terms of reference for the resumption of Cyprus talks.

“In the coming days, in fact, he [President Anastasiades] will contact Mr Akinci, seeking to have some type of meeting,” government spokesman Prodromos Prodromou said.

Prodromou added that the president reaffirmed his willingness to talk with Akinci, and that Anastasiades and Lute discussed issues that deal with the guarantor powers.

Lute will leave Cyprus later on Monday, and is set to have discussions with the guarantor powers, Greece, Turkey and the UK.  The exact timings are not known.

Asked whether Lute would be present at any talks Anastasiades’ would have with Akinci, the spokesman said this was neither provided for nor needed. “We will see in the next few days how a meeting can take place,” Prodromou said.

Concerning the progress in the process after Lute’s contacts, the spokesman reiterated that “the dialogue continued, as expected, issues relating to guarantor powers have been raised, and Mrs Lute will now have contacts with the guarantor powers”.

Following Lute’s contacts with Akinci, his spokesman, Baris Burcu, said the Turkish Cypriot leader emphasised the importance of political equality for their side.

In a written statement, Akinci’s spokesman added that taking steps back on issues that were already agreed would not serve restarting the talks.

“Political equality of Turkish Cypriots and effective participation in decisions is essential. Devotion to this principle is inevitable in order for the terms of reference to be successful, ” the statement said.

The Greek Cypriot side is ready to resume talks immediately from the point they ended in the summer of 2017, Anastasiades said earlier on Monday from Paralimni.

“What we are trying to do is to convey a clear message about our positions,” he said of his meetings with Lute over the weekend. “And there is one message: We are ready to start the dialogue today even, from where it was left in July 2017.”

According to reports, Anastasiades asked for the Turkish side to submit in writing proposals on the Guterres framework as the Greek Cypriot side had done.

Anastasiades spoke with Lute for three hours on Sunday after she met Turkish Cypriot leader Mustafa Akinci earlier in the day.

The UN is trying to help the two sides agree on the terms of reference that would enable resumption of reunification talks.

However, the UN seems to be delaying a push to restart Cyprus talks until after elections for the European parliament and local elections in Turkey, reports said.

Speaking in Paralimni, the president expressed hope Turkey would also respond to the UN effort since it played a key role in the island’s division.

Anastasiades said he was ready at any moment to see Akinci, adding it was the Turkish Cypriot leader who refused.

“I am not the one who refuses. Don’t forget that in two meetings, in April and later before the opening of the checkpoints, Akinci did not even want photographers because he did not want to give the impression that the talks had resumed.”

In an interview with the CyBC on Sunday Foreign Minister Nikos Christodoulides said he had conveyed the message that talks must start immediately to his Turkish counterpart Mevlut Cavusoglu during a recent meeting in Bucharest.

Christodoulides also said Lute is expected to have something more specific to say to Anstasiades about the terms of reference for restarting the talks, which is why a second meeting was held on Monday.

Meanwhile, Turkish Cypriot leader Mustafa Akinci on Saturday visited the Dherynia crossing for the first time since its opening on November 12 last year.

The previous day he had visited the new crossing at Apliki, which opened the same day. During Saturday’s visit to Dherynia, the Turkish Cypriot leader said he hoped that Cyprus would reach a future of lasting peace where barricades would not be needed.

“It is not difficult to build conditions for a future in Cyprus with peace and prosperity without the need for barricades, and this can be done by both sides showing respect for mutual rights and political equality,” he said.