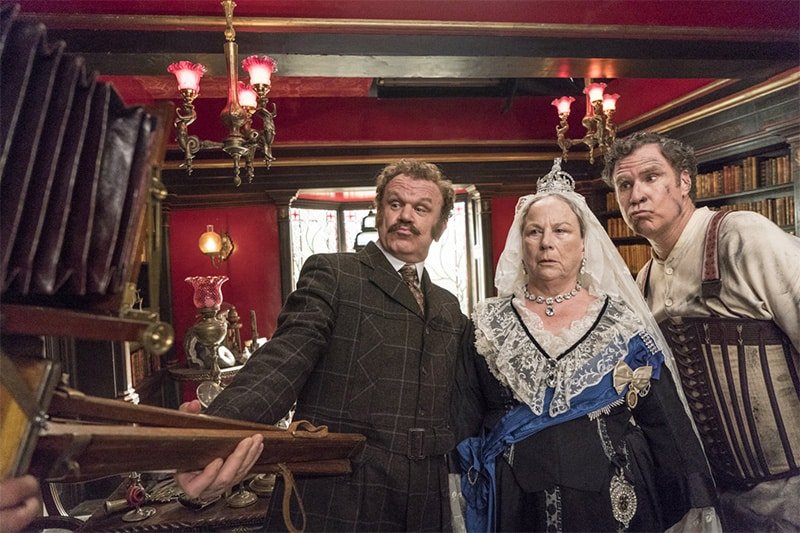 True excellence is vanishingly rare; then again, so is true awfulness. Holmes & Watson comes trailing some of the worst reviews in recent memory. A quick search on Metacritic produces any number of indignant critics not holding back on the epithets: “abysmal”, “lame and forgettable”, “excruciatingly awful”, “devastatingly unfunny”. (Not just unfunny, ‘devastatingly’ unfunny!) The film is obviously bad – but is it really so awful? I admit I chuckled, albeit mostly against my better judgment. Can there really be no trace, no stray little molecule of mirth in (say) a courtroom scene where the defendant is described as “an onanist of the most enthusiastic kind”?

Sherlock Holmes and Dr. Watson are those levelling that harsh accusation – though their audience isn’t sure what ‘onanist’ means so they try to explain, using ever more obscure euphemisms (“He pours his own tea,” offers Watson). Will Ferrell plays the Baker Street sleuth, John C. Reilly his friend and amanuensis – and the actors are obviously wasted doing extended masturbation jokes, yet they’re also a team with an easy rapport (this is their third film together, after Talladega Nights and Step Brothers): Ferrell the vain, prissy egotist, Reilly the klutzy teddy bear. Even at its considerable worst, Holmes & Watson offers the comforting spectacle of two old pros calibrating their respective comic skills to the same wavelength: when they recall ‘what happened in Istanbul’ and exclaim “Syphilis!” in unison, I don’t really know what they’re talking about but I chuckled anyway.

Comedy, of course, is subjective, and American comedy is going through a weird phase – maybe because most acclaimed comedians (and the critics who acclaim them) grew up on the arch, snarky, name-dropping humour of The Simpsons and Saturday Night Live. This is not that kind of comedy, dealing in hammy burlesque and gleefully childish knockabout, certainly crude but not aggressively gross (even the inevitable vomit gag isn’t too graphic), throwing in the occasional topical bit – a dig at Trump, say – but mostly content to coast on good-natured slapstick, plus occasional wacky asides. On the silliness spectrum, it’s nowhere near as smart as a ZAZ spoof like Top Secret! but a lot more bearable than a Wayans spoof like Fifty Shades of Black.

The wacky asides may be viewed as a sign of desperation, but they have their moments. Sherlock gratuitously insults the wife of long-suffering Inspector Lestrade, comparing her face to a “pig’s rectum”, the abuse being even more gratuitous since the lady in question is (a) sitting right there, and (b) obviously beautiful. Later, he extols the health benefits of eating onions – and we get a baffling scene where he and Watson stuff their faces with onions, munching them like apples (you’d expect the scene to have a big payoff later on; you would be wrong). Then there’s housekeeper Mrs. Hudson (Kelly Macdonald), re-imagined as a cheeky trollop who uses Watson’s bedroom for her assignations; her lovers include various turn-of-the-century celebs, a gag seemingly included for the sole purpose of Mark Twain explaining that what they were doing in the bedroom “sounds like ‘Huck Finn’”. Yeah, this is not a good movie.

How bad is bad, though? How bad is unwatchable, and can a poor film still be recommended when its lowbrow antics are kind of mindlessly fun? These are not idle questions, especially when a cinema ticket costs money and Netflix is practically free (or feels like it is). Non-TV comedy has withered in recent years, movies now demoted to a secondary market for those Hollywood comedies deemed too outrageous for the small screen (even something as witty – and non-Hollywood – as The Death of Stalin comes with a touch of ‘You can’t do that on television’). Comedy, we’re told, doesn’t travel – though anyone who’s seen a Greek comedy knows that geographical proximity is no guarantee of hilarity.

Meanwhile we have Holmes & Watson, which is witless and sloppy but, honestly, not as bad as you may have heard. Watson dances a “Dutch jig” to attract a mosquito that’s been infected with plague by the evil Moriarty (Reilly’s a graceful dancer, as we know from Chicago), while Holmes dons a handlebar moustache – proving himself “a master of disguise” – and experiments with hats throughout the movie, going from a Stetson to a pirate hat to a fez emblazoned with ‘Make England Great Again’ before finally settling on his familiar deerstalker. The duo take it in turns to be incompetent, though Ferrell’s Sherlock lacks invention next to Reilly’s loveable, low-self-esteem Watson (described as “a physician of no great talent or renown” in the local paper). Queen Victoria poses for a selfie, the Elephant Man comes out with a cryptic line about balloons, while a bunch of Dickensian street urchins respond to the great detective’s insights with a chirpy “No shit, Sherlock!”. Worst film of the year? I’ve seen worse.

Screening for false meds to be introduced at pharmacies