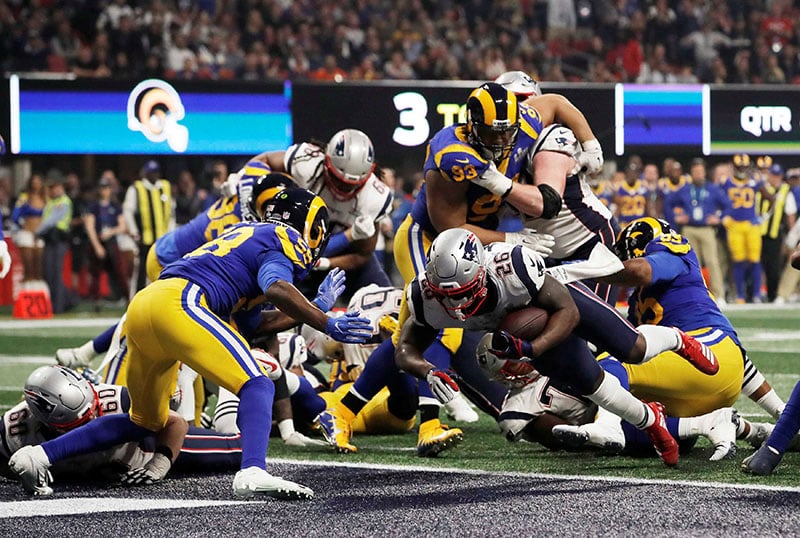 The victory, which moves the Patriots into a share of the all-time mark with the Pittsburgh Steelers, was also a record sixth Super Bowl triumph for Tom Brady, who at 41 became the oldest quarterback to win the championship game.

Brady was joined in the record books by 66-year-old Bill Belichick who becomes the oldest coach to hoist the Vince Lombardi trophy.

“It’s sweet,” said Belichick. “Everybody counted us out from the beginning of the season, the mid-season but we’re still here.”

Brady again orchestrated the victory finally cracking open a tight 3-3 defensive battle late in the fourth quarter when he hit Rob Gronkowski with a 29-yard pass to set up a two-yard touchdown run by Sony Michel.

The Rams looked likely to hit right back when Jared Goff marched Los Angeles into New England territory only to be intercepted on the four-yard line with four minutes to play.

Brady moved in for the kill with another drive to set up kicker Stephen Gostkowski who nailed a 41-yarder with 72 seconds remaining to clinch New England’s third Super Bowl since 2015.

Until the final few minutes the most spectacular moment of an uninspiring contest came when the $1.6 billion Mercedes-Benz Stadium’s ocular eight-pedal retractable roof opened to a massive roar.

That moment aside fans of attacking football had little to cheer with Gostkowski’s 42-yard field goal accounting for all the first half scoring.

The Rams high-powered offence, which averaged nearly 33 points a game during the regular season, failed to fire and managed just 57 total yards and two first downs in the first half and 260 for the game.

Brady, however, had the New England offence on the move ringing up 407 yards of offence but were their own worst enemy committing uncharacteristic errors.

“We had a lot of resolve the last couple of weeks,” said Brady, who completed 21 of 35 pass attempts for 262 yards. “I wish we had played a little bit better on offense but we won.

“I can’t believe it, we are Super Bowl champs.”

For a team that rarely beats themselves the Patriots did a pretty good job of it in the opening quarter when Brady had his first pass intercepted to snuff out a promising scoring drive and then on their next possession Gostkowski missed a 46-yard field goal to squander another opportunity.

It was the first missed field goal inside Mercedes-Benz Stadium this season.

Despite the costly miscues, New England continued to move the ball and Brady dove them to the Los Angeles 24 with the help of a 25-yard pass to Julian Edelman where Gostkowksi atoned for is earlier miss to send the Rams into the break up 3-0.

Edelman pulled in 10 catches for 141 yards to be named the Super Bowl’s most valuable player.

“I wasn’t focused on that (having an MVP performance),” said Edelman. “I was just trying to have a good week or practice and do my job and sometimes the cookie crumbles that way.”

The Rams sputtering offence finally began to get in gear late in the third quarter as Goff engineered a modest 10-play drive that ended with Greg Zuerlein connecting on a 53-yard field goal to tie the game at 3-3.

But points were still hard to come by as two teams reached the final quarter without a touchdown for the first time in a Super Bowl, the six points the fewest ever after three quarters.