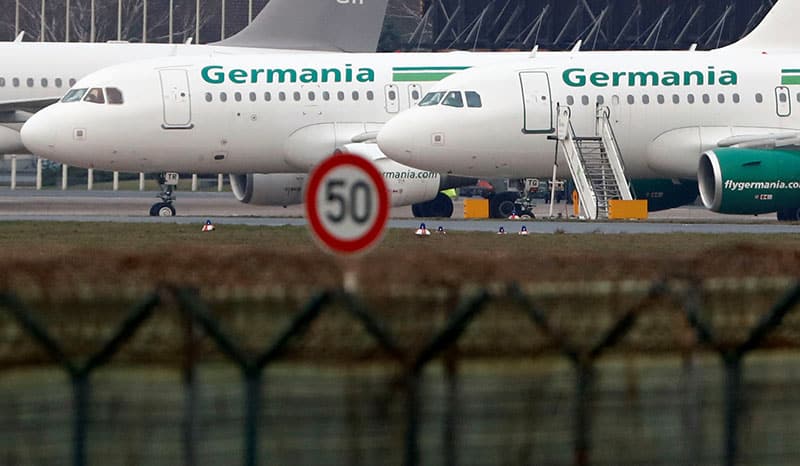 German holiday airline Germania collapsed on Tuesday after it failed to secure financing to meet a short-term cash squeeze and said it would cancel all flights immediately.

According to Cyprus airports operator Hermes on Tuesday, the airline was operating four flights a week to Paphos from four German airports; Berlin, Dusseldorf, Hamburg and Nuremberg, carrying some 50,000 visitors to the island last year.

Winter traffic, according to Hermes, was in the region of 700 passengers a week across the four flights.

Around 80 per cent of visitors booked online and will be sorted out by the airline, Top Kinisis, which is listed as the representatives for Germania in Cyprus said.  It added that any Cypriots who booked, but they were very few, should contact their bank to secure a refund, as was the case with Cobalt airlines.

The insolvency of Germania, which carried around 4 million passengers each year, follows on from the failure of Germany’s second-biggest airline, Air Berlin, in 2017, and underscores the turbulence in the European airlines industry.

Britain’s Monarch Airlines and Alitalia have also filed for insolvency in recent years.

Germania, founded in 1986, blamed rising fuel prices, a stronger dollar, delays in integrating new aircraft into its fleet as well as a high number of maintenance services for the cash shortage.

“Unfortunately, we were ultimately unable to bring our financing efforts to cover a short-term liquidity need to a positive conclusion,” Chief Executive Karsten Balke said in a statement.

Germania’s 37 aircraft mainly flew German sun-seekers to more than 60 destinations in Europe, North Africa and the Middle East. It said all flights had been halted overnight after it filed for bankruptcy late on Monday.

Balke thanked the airline’s staff and apologised to passengers who had booked directly with the airline who it said would not be entitled to alternative flights.

The Federal Association of the German Aviation Industry said airlines, including those belonging to the Lufthansa Group , TUIfly and Condor, would offer stranded Germania passengers special rates to return to Germany.

Europe’s largest budget airline Ryanair, which posted its first quarterly loss since 2014 on Monday, said it expected further consolidation in the industry over the next 12-18 months due to overcapacity.

It predicted a further rise in oil prices would put the squeeze on smaller airlines that can’t afford to increase their oil price hedging.

Germania’s own financial problems emerged at the start of January when it said it was examining several financing options to secure its short-term liquidity needs.

It said on Jan. 19 it had received a commitment for 15 million euros ($17 million) in funding that would secure its medium and long-term future, but at the end of last week it confirmed media reports that it had delayed paying wages.

Air Berlin, which served around 30 million passengers a year filed for insolvency in 2017 and ceased operations. Many of its aircraft were absorbed by bigger rival Lufthansa.

Art through the senses at Leventis Gallery