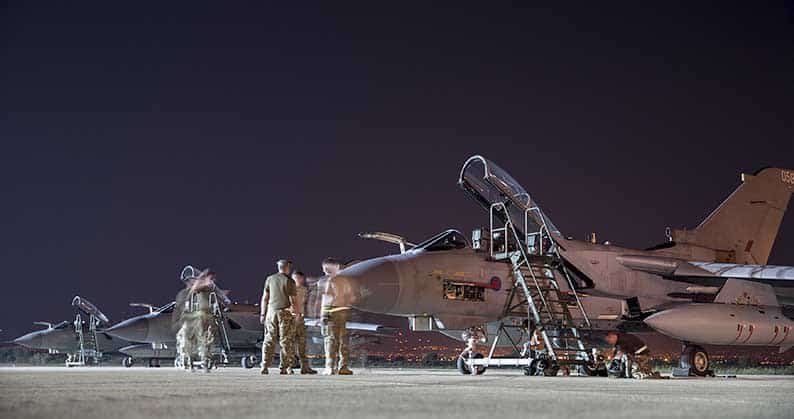 The last RAF Tornado jets, which are being decommissioned at the end of March after 40 years in service have left the British base at Akrotiri and returned home to the UK for the last time.

The eight Tornadoes, the last three of which left Cyprus on Tuesday evening, flew back to RAF Marham in Norfolk, the UK’s Press Association reported.

Five of the jets flew out on Monday and the other three on Tuesday. The jets were being used in the campaign against the Islamic State in Iraq. They were also used in the first Gulf War in the early 90s.

According to British media, Defence Secretary Gavin Williamson said: “It is with a heavy heart, but enormous pride that we bid farewell to the Tornado from operations. This truly is the end of an era, having played a vital role in keeping Britain and its allies safe for four decades. But, after so long in service, it is only right that we now look to the future.”

“The combination of our state-of-the-art F-35s and the Typhoon’s new weapons systems will keep us as a world leader in air combat for a generation,” he was quoted as saying.

The Typhoon jets have replaced the Tornados at Akrotiri. Six of them as stationed on the island.

The British bases could not be reached for comment on Wednesday.

According to the Press Association, asked if the departure of the Tornados would leave a gap in the air campaign against Islamic State, Air Vice Marshal Harvey Smyth said it wouldn’t.

“Effectively the capability that the Tornado has brought to bear we have built up our Typhoon force that it can also match that capability,” he said.

The Press Association said the air crew of the last three Tornadoes to return included Flight Lieutenant Nathan Shawyer, 27. Shawyer was the last ever pilot to be trained for Tornado jet operations by the RAF, it said.

He described it as the “end of an era” and that the final flight from Cyprus to the UK was “a privilege to be part of, a fantastic sortie, an honour”.

“When we left Akrotiri there were hundreds of people lining up and there was a real sense of what a big occasion it all was,” he was quoted as saying.

In July 2025, the runway at Akrotiri had to be closed when two armed Brimstone missiles fell off of a Tornado as it came in to land from a sortie over Iraq.

Six months previously, in a letter publicised by the BBC, an RAF member said raids from Cyprus were being conducted against ISIS with “broken jets and tired and fed up people”. The claims were denied by the UK defence ministry at the time.

Leaders to meet in second half of February