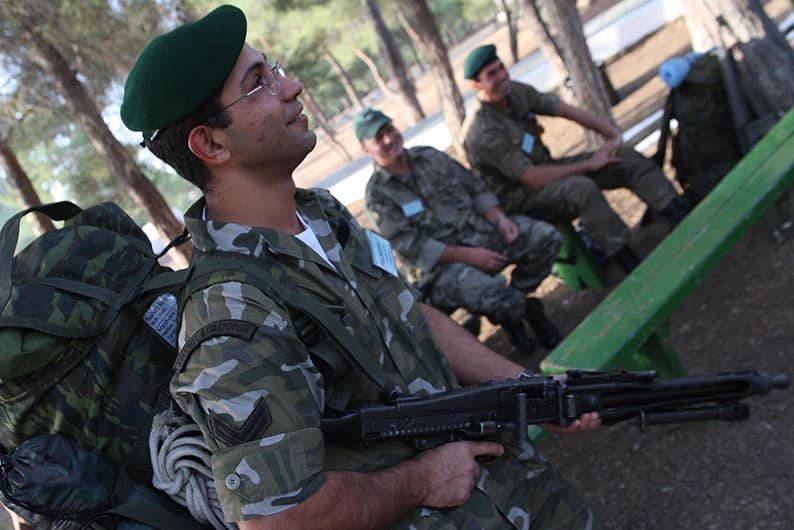 Almost 11,000 Cypriot men do not serve in the National Guard reserves either because they fail to declare their repatriation, are still listed as being students abroad despite being over 30, or they know someone in high places, the audit office revealed in a special report issued on Wednesday.

According to the report by the audit office on the National Guard’s recruitment system, some 10,930 men who did their army service between 1990 and 2010, have not been recruited as reserves because they are still registered in the computerised system as an “external student”.

“This, in addition to depriving the National Guard of a significant number of reservists, creates feelings of injustice and unequal treatment among citizens of the Republic,” the report said.

Those who have done their national service are obliged to serve as reservists three times a year until the age of 50. Many people view reservist duty as a waste of time and loss of income since they have to take time off work. Most say they do nothing most of the time, spending their time “under the carob trees”.

“In particular, a large number of reservists belonging to the 30-47 age group, who are still present in the computer system with the designation ‘external student’, have been identified from the checks carried out, who have not been called for reserve duty… although with all reasonable probability they are expected to have completed their studies long ago,” the report said.

It added that these include people currently serving as board members of semi-government organisations, football referees in the first division of the Cyprus League, first-division footballers, politicians, as well as people who work at the presidential palace, lawyers and media.

According to the data of the social insurance register, most of these people are resident and employed in Cyprus, the audit office said. A total of 381 are employed in various parts of the public sector with the words “external student”, “working abroad” or “external resident”.

It said in many cases of reservists the army’s computer system identified them as “working abroad” and so have not been called up for reserve duty for years. The audit office said such temporary exemptions were not justified, especially as their details and addresses are readily available from social insurance. None has ever been prosecuted and the procedures followed for the execution of military orders on reservists “are inadequate and ineffective”, the report said.

Late in the afternoon, Disy spokesman Demetris Demetriou said he was one of the politicians referred to in the report, and admitted it was a mistake.

“I was never summoned to reserve duty. But of course, ignorance of the law cannot be forgiven and this in no way is an excuse. I made a mistake.”

At the same time, the audit office identified cases of persons who while they were entitled to a temporary exemption for whatever reason, were never recalled for reserve duty when it expired, and in at least one case, even though the recall was ignored by the reservist, no steps were taken against him. A similar situation happened in the case of a judge, the report added.

It also addressed the issue of foreign nationals gaining Cypriot citizenship who were given a waiver by the cabinet from having to serve in the army.

According to the data kept at the ministry of interior, since 2008, when the relevant decision of the cabinet for the extraordinary naturalisation of foreign citizens entered into force, until the year 2017, Cypriot citizenship was acquired by a total of 3,381 foreigners.

The report also said that there had been a ministerial decision to exempt elected mayors from reserve duty, “which appears to be unlawful”.

“Furthermore, the postponement of reserve duty for prison guards, currently amounting to 304, has been done without the statutory conditions for granting the postponement being met,” the report added.
“People who have been temporarily removed from the reserve on the grounds that they are members of the police or the fire brigade, but who have never been members of these bodies have also been identified,” said the report, adding that it had found seven such cases in the case of the fire service and 21 who claimed to be members of the police but were not.

A total of 42 people, who resigned from the police and the fire service, are also still included in the temporary exemptions “although years have elapsed since their resignations”.

In addition, 35 people were given postponements on the grounds that they were hired as ‘special police officers’, those who work in security at some government departments, municipalities, bishoprics, embassies and the central bank. The audit office said these people were not ‘official’ police.

In response to the report, the defence ministry informed the audit office, according to CNA, that from 2019 a new system of call-up will be implemented, which is designed to cut out the waste in the system. There would also be reductions in the number of exemptions granted.

The changes were announced last September as part of an overhaul of the reserve forces, which includes a reduction in time wasting and an increase in annual attendance accompanied by a cut in duration and more flexible shifts.

‘I remembered his eyes’: Kvitova tells court of knife attack