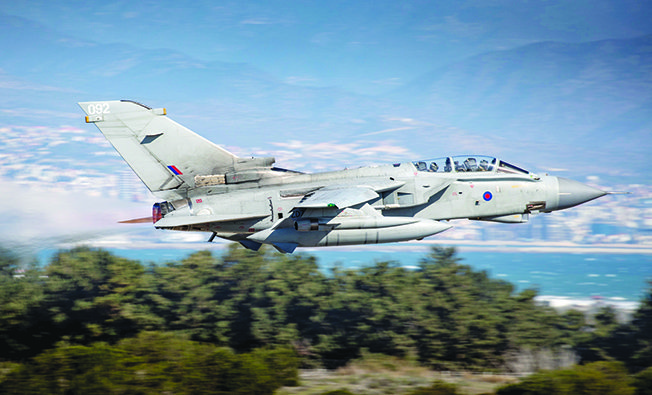 The Tornado is now scheduled to be officially retired from service at the end of March and will only be used for training purposes over the UK in the intervening period. It was announced in 2012 that the fast-jet would be retired and its final flight back to the UK marks an historical day for British Forces in Cyprus

The RAF’s much-loved Tornado aircraft left British Forces Cyprus this week and returned to the UK for the final time, ending almost four decades of successful service to the Forces.

The Tornado is now scheduled to be officially retired from service at the end of March and will only be used for training purposes over the UK in the intervening period.

It was announced in 2012 that the fast-jet would be retired and its final flight back to the UK marks an historical day for British Forces in Cyprus.

Speaking this week as he watched the Tornado leave RAF Akrotiri, Station Commander, Group Captain Christopher Snaith, paid tribute to the aircraft, which was first used in live operations in 1991 during the Gulf War.

He said: “Tornado marks the end of an era, not just for RAF Akrotiri, but for the RAF as a whole. The aircraft has been on continuous operations in the Middle East for the last 28 years and for many people based here, me included, it has been a big part of our military careers.

“From flying low level missions over Iraq during the first Gulf War, to the employment of precision weapons in the fight against Daesh, the Tornado has served the UK with distinction and there is huge pride in what it has achieved.”

The weapons capabilities of the Tornados will now be delivered by RAF Typhoon jets, which will continue to take a leading role in the Coalition’s mission against Daesh operating from Cyprus.

And with improved capabilities, they will form the backbone of the UK’s combat air fleet, alongside the recently introduced new fleet of F-35 Lighting jets over the coming years.

Looking ahead to the future at RAF Akrotiri, the Station Commander was confident that the mission would continue successfully: “With the Tornado leaving, the burden of continuing the fight falls to Typhoon, which has been based at Akrotiri since the summer of 2015, so in truth its role will not change.

“As the backbone of the UK’s combat air capability, it will continue to keep the UK at the forefront of the US-led Coalition efforts to defeat ISIS in Iraq and Syria.”

As the jets returned to RAF Marham in Norfolk on Tuesday, families and friends of the present-day squadron members were on hand to welcome them back and there was no shortage of people keen to pay tribute to the aircraft.

Defence Secretary Gavin Williamson, was one of the first to make his feelings known: “It is with a heavy heart, but enormous pride, that we bid farewell to the Tornado from operations. This truly is the end of an era, having played a vital role in keeping Britain and its allies safe for four decades.“But, after so long in service, it is only right that we now look to the future. The combination of our state-of-the art F35s and the Typhoon’s new weapon systems will keep us as a world leader in air combat for a generation.”

Those sentiments were echoed by Chief of the Air Staff, Air Chief Marshal Sir Stephen Hillier, who added: “My sincerest congratulations to the Tornado Force, returning home after more than four years of continuous commitment to defeating Daesh in Iraq and Syria – an exceptional effort from everyone, well done and thank you.

“As a Tornado GR4 pilot myself, I have seen the aircraft develop over its nearly 40 years of service into an outstanding combat aircraft, flown, maintained and supported by similarly outstanding air and groundcrew.

“The Tornado Force has been continuously deployed on operations since 1990, serving with immense distinction in Iraq, Syria, Afghanistan, Libya and the Balkans.

“We can all take immense pride in what the Tornado has achieved in defence of the nation over nearly four decades and reflect back on the courage, commitment and achievements of everyone who has contributed to the success of this extraordinary aircraft.”

New TV technology to take fans ‘inside the game’