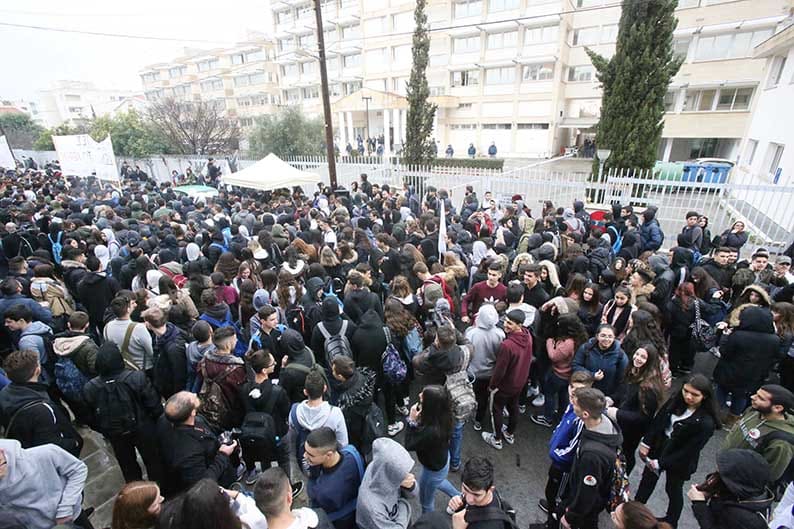 Around 2,000 students protested amid rain showers outside the ministry of education on Thursday against the introduction of four-month exams.

Education Minister Costas Hambiaouris strongly condemned the protest. The minister and the parents association stressed there was no need for the demonstration as there was already an ongoing dialogue.

Student group Psem reiterated at the event at 10.30am that they wanted to send out a loud message they would not accept that schools will be turned into ‘exam centres’.

“What is the loud message?” Hambiaouris said after the protest, talking on Sigmalive TV. “We have an ongoing dialogue. Tomorrow we are going to have a meeting, and if the students have issues they should bring them. Together with the organised parents and the educators we will give everybody one week to think again and will meet again on Wednesday 13.”

The students talk about dialogue, he added, but they themselves say if the twice-yearly exams were not abolished there could be no agreement.

He went on to say that many don’t understand what the issue is exactly, and students who were asked what they were protesting against, told TV stations during the demonstration they did not know.

“Four-month evaluation exists today. People need to understand this. Our students got a grade for four months a few days ago. How? Doing 35 to 40 unannounced tests. We are talking about one 45-minute exam which will be announced and one 90-minute exam, also announced. The students who do not pass the 45-minute exam will be allowed to repeat it. How many systems exist where pupils who do not pass an exam are allowed to repeat it?” said the minister.

People say Cyprus has a system which only relies on memorising and regurgitation, the minister went on to say, explaining that the new system means just 40 per cent of the grade would be determined by exams and 60 per cent would concentrate on developing other skills, such as fostering critical thinking and preparing and presenting projects in class, while today the students get a diploma based solely on exams.

“We all agree there is a problem with the evaluation. We all agree we need to take the same step. When we explained to students what the new law was about they said if this is what you want we will adopt it tomorrow. And that’s not what I say, these are the students’ words.”

“Do we want to improve or not? Or do we want to be still talking about the same subject a few years from now?” Hambiaouris asked.

RAF Tornado blows out of Cyprus

US Senate panel chief sees no Russia collusion so far