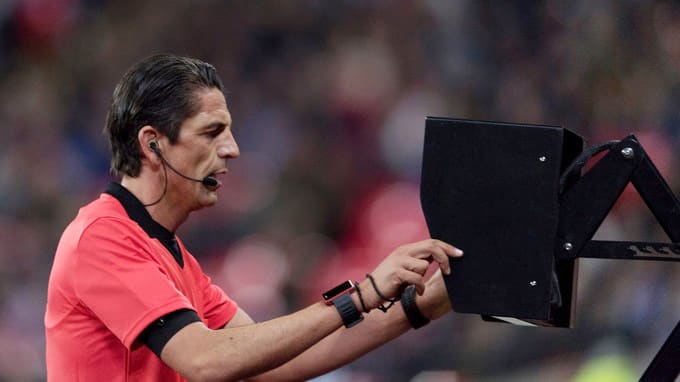 Having seen the system being used in leagues throughout Europe and at last summer's World Cup in Russia, UEFA wants its use of VAR to be more consistent and less intrusive, with the final say left with the referee on the pitch

Players who make a television-screen gesture with their hands to appeal for a video replay in UEFA competitions will be shown a yellow card, European football’s governing body has confirmed.

Like the Premier League, UEFA has delayed the introduction of Video Assistant Referees (VAR) but has now committed to using them from this month’s knock-out round of the Champions League, the Europa League final, this summer’s Nations League finals and Euro 2020.

Having seen the system being used in leagues throughout Europe and at last summer’s World Cup in Russia, UEFA wants its use of VAR to be more consistent and less intrusive, with the final say left with the referee on the pitch.

In a media briefing ahead of Thursday’s UEFA Congress, the confederation’s referees chief Roberto Rosetti explained that maintaining the referee’s authority was a key part of that, which is why he wants a crackdown on players appealing for VAR.

“Any player who shows shape of the TV screen needs to be cautioned,” said Rosetti.

“And if they surround the referee, there must be disciplinary intervention. We want action in these situations.”

To illustrate this point, Rosetti showed a video of England defender Harry Maguire clearly gesturing for a video replay after Jordan Henderson was headbutted by a Colombian during the heated last-16 game in Russia.

The 51-year-old Italian also explained that UEFA wants to use VAR more sparingly.

“We don’t want to re-referee the match and destroy the spirit of football with three or four interruptions every match,” he said.

“There must be clear images for clear interventions.”

Futhermore, Rosetti wants referees to check all judgement calls on the pitch-side monitor, as opposed to simply taking the VAR’s opinion on the matter.

“VAR has to be an insurance, a parachute for the referee,” he said.

Master’s in simulation and data science at Cyprus Institute