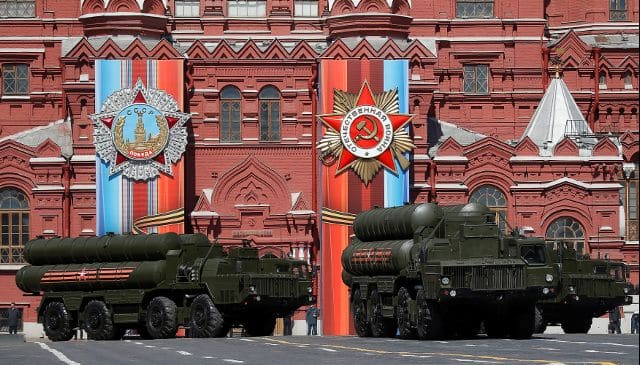 MOSCOW, Feb 7 (Reuters) – With his ratings down and state funds needed to hedge against new Western sanctions and raise living standards, Russian President Vladimir Putin cannot afford to get sucked into a costly nuclear arms race with the United States.

Alleging Russian violations, Washington said this month it was suspending its obligations under the Intermediate-range Nuclear Forces Treaty (INF) and starting the process of quitting it, untying its hands to develop new missiles.

That raises the prospect of a new arms race between Washington and Moscow, which denies flouting the treaty. Putin responded by saying Russia would mirror the U.S. moves by suspending its own obligations and quitting the pact.

But Putin, who has sometimes used bellicose rhetoric to talk up Russia’s standoff with the West and to rally Russians round the flag, did not up the ante.

He did not announce new missile deployments, said money for new systems must come from existing budget funds and declared that Moscow would not deploy new land-based missiles in Europe or elsewhere unless Washington did so first.

“…We must not and will not let ourselves be drawn into an expensive arms race,” Putin told Defence Minister Sergei Shoigu.

His statement was borne of necessity.

Harsh economic and political realities and memories of how the cost of the Cold War arms race contributed to the Soviet Union’s demise means Putin’s options are limited, a situation that may curb his appetite for expensive escalation in future.

That does not mean Putin is not still spending heavily on the military. He unveiled an array of new weapons last year which he billed as world-beating, including a hypersonic missile, a laser weapon, an underwater nuclear drone and a nuclear-powered cruise missile.

But his ability to bankroll a full-on arms race is limited.

“We need to keep in mind that the question of an arms race that could cut us into pieces is entirely realistic,” Sergei Dubinin, former governor of Russia’s central bank, told Russia’s RBC TV channel before Washington announced its exit.

He said the United States was trying to repeat its successful Cold War strategy of pushing Moscow into an arms race it could not afford and that Russia would be ill-advised to try to attain parity and needed a smart response instead.

Memories of empty supermarket shelves in the run-up to the 1991 Soviet collapse still haunt many older Russians as the then Soviet Union directed huge cash flows to the military-industrial complex to try to keep up with the United States while neglecting the consumer economy.

“They (the Americans) recall that the Soviet Union collapsed in part because it tried to keep up with the United States when it came to who produced more missiles, nuclear submarines and tanks,” Viktor Litovkin, a military expert, told the Russian army’s Zvezda TV channel.

“They are trying to do the same thing today.”

With the INF treaty suspended, Washington and Moscow have said they will develop previously prohibited short- and intermediate-range land-based missiles, with Russia saying it wants them ready by 2021.

Russia does not disclose the full extent of its military and national security spending, but says it will account for around 30 percent of its 18-trillion-rouble ($273-billion) budget this year.

Oil revenues mean Russia is not short of money. Its budget surplus this year is projected to be 1.932 trillion roubles ($29.3 billion) or 1.8 percent of gross domestic product. Russia’s foreign exchange reserves stand at $478 billion, the fifth largest in the world. But the money is already allocated in a way dictated by Moscow’s difficult geopolitical situation and by Putin’s own increasingly tricky domestic political landscape. Reallocating the money would be painful.

Moscow is hoarding cash to try to give itself a $200-billion buffer against new Western sanctions and is embarking on a multi-billion dollar spending push to try to overhaul the country’s creaky infrastructure and raise living standards.

With signs of rising discontent over years of falling real incomes, rising prices, an increase in value-added tax and an unpopular plan to raise the pension age, Putin is under pressure to deliver.

Igor Nikolaev, director of auditor FBK’s Strategic Analysis Institute, said Putin might have to take money from other parts of the budget to fund a new arms race which would force him to scale back social spending plans or dip into the national wealth fund to top up the budget.

If a burgeoning arms race intensified, such a scenario would become more likely and Putin would be reluctant to spend more on defence in the current political climate, he said.

“It would not be desirable, especially as we know what’s happening with real incomes and that there are problems with his rating,” said Nikolaev. “Cutting spending on national projects would receive a mixed reaction.”

Though re-elected last year until 2024, and therefore not under immediate political pressure, Putin’s trust rating has fallen to a 13-year low. A poll this month showed the number of Russians who believe their country is going in the wrong direction hit its highest level since 2006.

“Are new arms a source of joy?” wrote blogger Vladimir Akimov, saying the money would be better spent on lifting people out of poverty. “Why not begin by repairing the roads and knocking down the wooden shacks (that people live in) across the country.”

Kotsiatis, Vati rubbish dumps to close at the end of the month

Women at the centre of film screenings