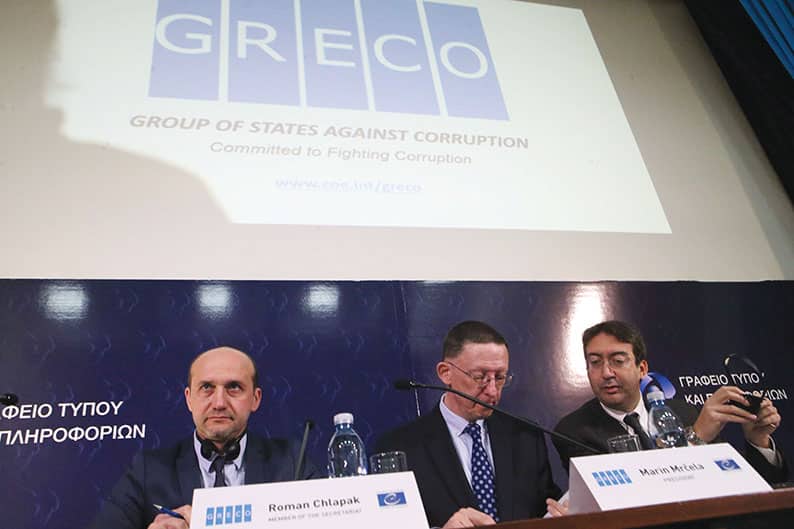 HEAD of the Council of Europe’s anti-corruption watchdog Greco warned Cyprus on Friday that it’s recommendations were not ‘optional’ and urged the government to implement them as soon as possible.

Of the 16 recommendations featured in Greco’s fourth evaluation round, four pertained to the judiciary; these have yet to be implemented. The judiciary was the focus of a recent uproar following allegations of improper exchanges between supreme court judges and a prominent law firm.

Speaking at a news conference on Friday, at the end of a fact-finding mission, Greco President Marin Mrcela said the organisation’s recommendations were not optional and urged the Cypriot authorities to implement them as soon as possible.

Mrcela said it was all the more urgent in light of the recent developments that cast a shadow over the integrity of the judiciary. Out of the 16 Greco recommendations, four concerned the judiciary, he said.

“Unfortunately, so far these four recommendations have not been fully implemented but partially,” he said. “What we are seeing now and what we would have wanted to see is progress regarding compliance with these recommendations.”

Following the fracas last month, the supreme court put together a judicial code of conduct, which had been one of the recommendations.

Greco had also recommended that the composition of the supreme council of judicature be subject should not be the same as the supreme court to prevent potential or perceived situations of conflicts of interest within the council.

The change is in the pipeline as part of the ongoing overhaul of the justice system.

“We will evaluate them and the plenum will then decide about compliance,” he said.

Greco also recommended that the integrity requirement for appointment as a judge be guided by precise and objective criteria which are to be checked before appointment or promotion, and that such criteria be made available to the public.

The third recommendation was a code of conduct to “be elaborated on the basis of broad involvement of various members of the judiciary, in order to manifest and develop standards that are commonly agreed aimed at the particular functions of judges, offering guidance in respect of areas such as conflicts of interest and other integrity related matters” such as gifts, side activities, recusal, third party contacts, and handling of confidential information.

Mrcela said they were shown the judicial code of conduct prepared by the supreme court but they did not have the time to study it in detail, which they will do.

Greco also recommended the creation of a school for judges – also part of the reform plans – to train judges in respect of judicial ethics, conflicts of interest and corruption as part of their induction training and provide in-service training of judges, based on existing provisions and practice as well as yet to be established ethical guidelines and European standards.

Mrcela said Greco was not an investigative organisation nor did it deal with specific cases.

“We evaluate implementation of CoE standards in relation with each member-state,” he said. “We know, and there is no doubt about it, that the judiciary in Cyprus has a high degree of independence and impartiality and of course we welcome this.”

He added however, that a judiciary must not only be independent and impartial but also viewed as such.

“Judges are there to dispense justice and protect the rights and freedoms of citizens. Therefore, judges must be independent and impartial. It’s a matter of credibility and trust.”

Mrcela said they needed additional information regarding the reforms before their assessment. But it seemed that everyone understood the need for this reform, he added.

The CoE official said Greco expected implementation of all the recommendations and saw no reason why Cyprus would not do so.

“I don’t see any hesitation by the Cypriot authorities to respond,” he said.

In response, Justice Minister Ionas NIcolaou, in a written announcement said the issues raised by Greco were serious and appear to be “recognised by all”.  “So there is a need for cooperation between all of the state bodies so that bills and other measures can be implemented so we can achieve the gradual recovery of the citizens’ confidence in the justice system,” it added.

“Proof of this is the fact that the government has fully complied with all the recommendations made to it during the third round of evaluation and has received a praise in 2018 for its actions,” he said.

With City back on top, Liverpool face test of nerves