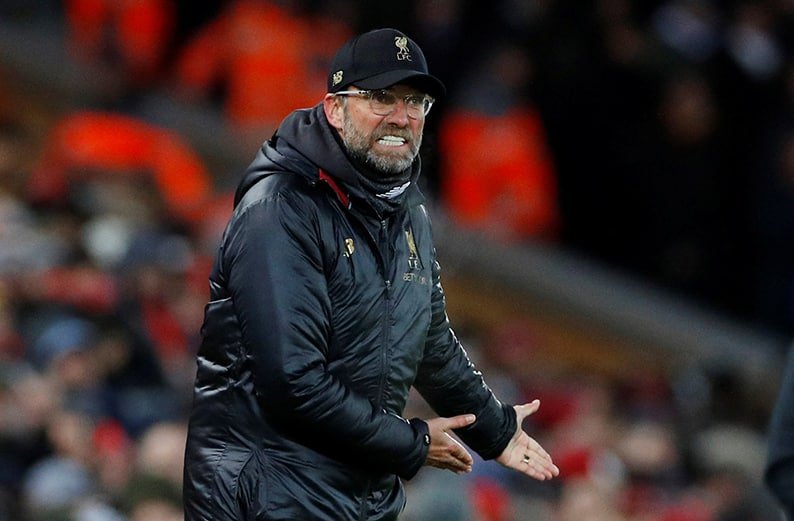 As Manchester City fans left Goodison Park after a 2-0 victory over Everton on Wednesday that sent their team back to the top of the Premier League, they aimed their chants across adjacent Stanley Park to title rivals Liverpool.

The taunt of “Juergen’s cracking up” directed at Liverpool manager Juergen Klopp was perhaps a reference to the slightly tetchy television interviews the German had given after his team’s 1-1 draw at West Ham United on Monday.

It was, of course, banter of the kind football fans love to engage in but the feeling that Liverpool are nervously feeling the pressure of the title race is growing widely.

Liverpool have not won the domestic league title for 29 years, a period that has included a lengthy spell of domination from their bitterest rivals Manchester United.

That run should have ended in 2014 when Brendan Rodgers’s team featuring Luis Suarez in attack found themselves five points clear with three games remaining.

But defeat at home by Chelsea and a 3-3 draw at Crystal Palace saw Manchester City, who won their last five games, grab the title on the final day.

It was an agonising and crushing end to the season and while Klopp has since transformed the team, taking them to the Champions League final last season, the memory remains for the supporters and some of the player.

Now with City above Liverpool for the first time since Dec. 8, the pressure is firmly on Klopp’s team, who host Bournemouth at Anfield on Saturday.

After successive draws – at home to Leicester and at West Ham – Liverpool sorely need to pick up three points.

Liverpool have not gone two home matches without a win since December, 2017 and have only ever lost once to the Cherries — a 4-3 defeat in Bournemouth in 2016.

Klopp’s side have won the last three meetings by a total of 11 goals to none.

City get a chance to respond to whatever happens at Anfield when they face Chelsea on Sunday, a match their manager Pep Guardiola describes as an “incredible test”.

Third-placed Tottenham are only five points behind the leaders and are coping well with the absence of captain Harry Kane, having won the last three league games without him.

Spurs host Leicester, without a win in their last five Premier League games, on Sunday.

Mauricio Pochettino’s team have gone a Premier League record 29 matches without a draw. The last top-flight team to have a longer run were Portsmouth between March 1928 and February 1929, with 38 matches.

Manchester United, unbeaten since Ole Gunnar Solskjaer took over from Jose Mourinho in December, kick off the weekend on Saturday at next to bottom Fulham and a win would see them, temporarily at least, go above Chelsea into fourth place.