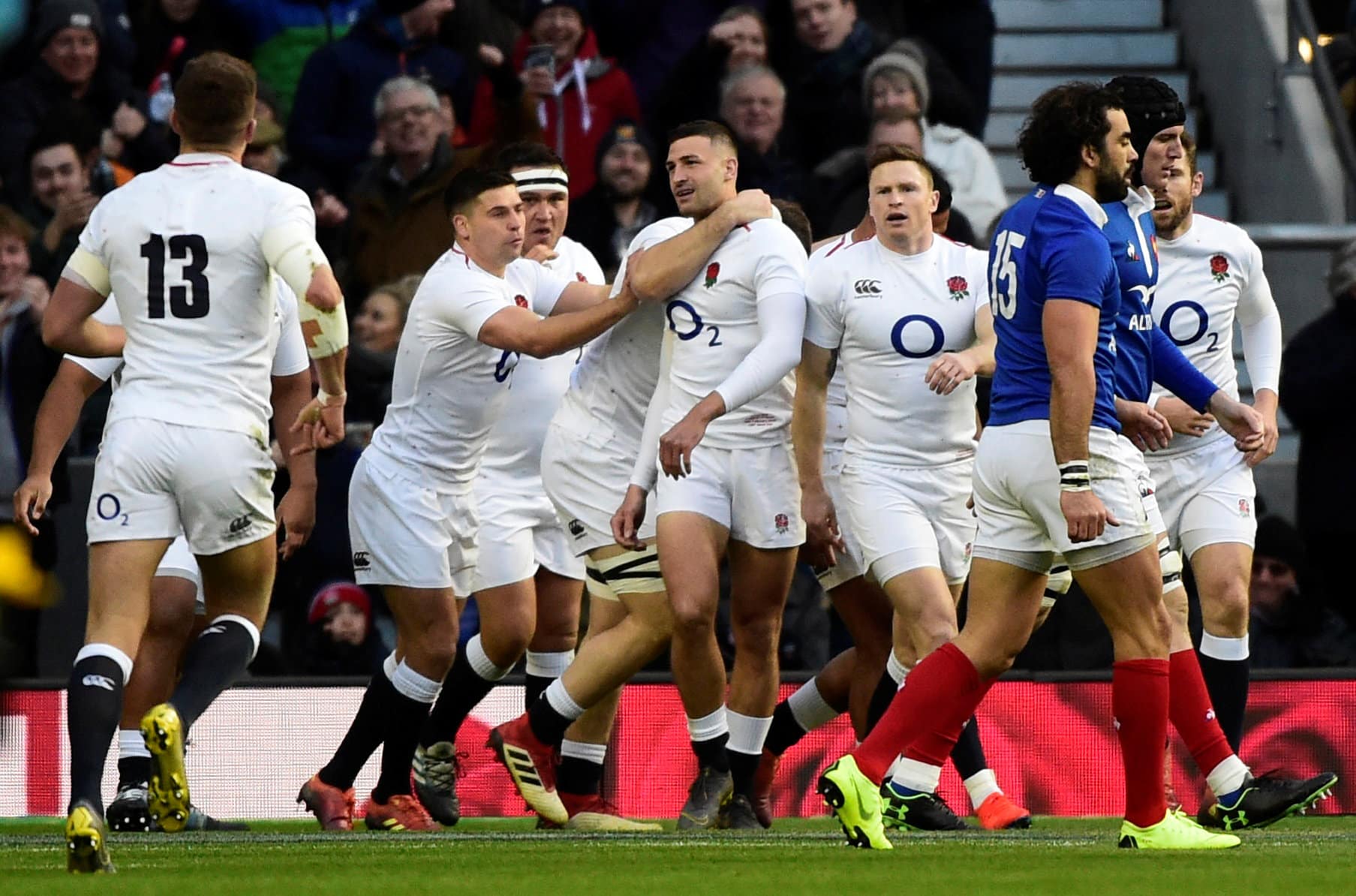 England's win was their second-highest margin of victory over the French, a point shy of their 37-0 win in 1911

* May hat-trick in first 30 minutes

* Biggest win over France for 108 years

LONDON, Feb 10 (Reuters) – Winger Jonny May scored a hat-trick in the first 30 minutes as a scintillating England ripped through a sorry France for a 44-8 victory at Twickenham on Sunday to put them top of the Six Nations table after two rounds.

After claiming an unexpected bonus point victory over Ireland last week, the extra point was in the bag by halftime as Eddie Jones’s team exposed France’s ragged defence again and again with a relentless deluge of kicks of every description.

The irrepressible May bagged the first three and Henry Slade the fourth as England forged a remarkable 30-8 halftime lead.

A penalty try and one for Owen Farrell put the game to bed early in the second half as England delivered on Jones’s promise that they would be even better this week.

“Trying to raise the bar after last week was the challenge, but we came out and definitely played some good rugby today,” May told ITV Sport.

“The brand of rugby we want to play, we want to put teams under pressure. I’m just doing my job, we are all working hard and putting some good performances together.”

England top the standings with 10 points from two bonus-point wins, with Wales – who they face next in Cardiff – on eight after their two opening victories.

It was their second-highest margin of victory over the French, a point shy of their 37-0 win in 1911.

France, who beat England in Paris a year ago, have now lost a remarkable 15 of their last 19 games and have managed only two championship victories at Twickenham in 30 years.

They had no answer to England’s relentless attacks, particularly their array of attacking kicks that had them turning, retreating and tying themselves in knots from start to finish.

QUICK OFF THE MARK

For the fifth game in a row, England had a try within the first few minutes. A mazy run and kick through by Elliot Daly set up a mismatch between some lumbering French forwards and the quicksilver May, which England’s winger won with embarrassing ease to touch down after 67 seconds.

The second came with echoes of Jason Robinson as May stuttered and dummied to somehow create space from nothing to zip past Damian Penaud to score his second.

His third was a far easier finish after Chris Ashton joined the kicking gang, nudging a perfect grubber into the same left corner to send Twickenham wild as England led 23-8 with less than half an hour gone.

A great run by Yoann Huget sent Panaud over for France. However, any hopes of a comeback were immediately snuffed out when they failed, yet again, to deal with a huge Farrell up and under and prop Kyle Sinckler spun a pass to Slade to dance over and send England in at halftime 30-8 ahead.

They stretched that with a penalty try after Gael Fickou dragged down Ashton as he bore down on another kick through by Slade. Farrell added the sixth, chasing his own kick after he took a quick tap and go after France were penalised for a halfway-line high tackle.

With Fickou yellow carded and “Swing Low” ringing around the ground, the French body language told the story of how they have slumped to a barely credible 10th place in the world rankings.

When they did muster a decent attack, talismanic 18-and-a-half-stone (120kg) centre Mathieu Bastareaud was cut down with a thunderous tackle by the impressive Courtney Lawes, much to the enjoyment of the majority of the 82,000 crowd. Jones said this week that Sunday’s game would have no bearing on the teams’ key pool meeting at the World Cup later this year in Japan, but there is no question which side will start that game with the greater belief.