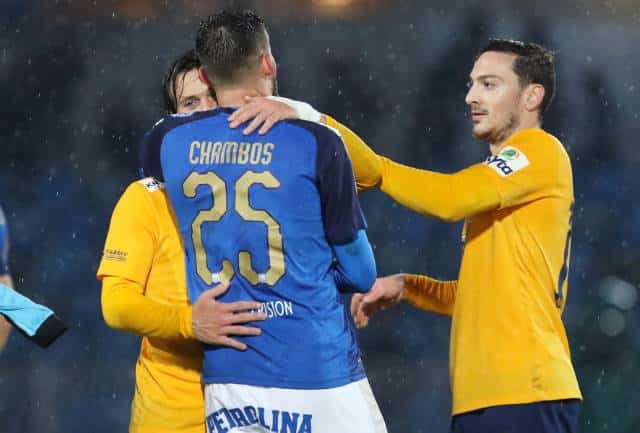 The big Limassol derby between Apollon and AEL ended goalless, allowing Apoel to move three points clear at the top after their 2-0 over Enosis.

Omonia missed the chance to move closer to the top six as they could only draw at home to Doxa Katokopias.

In one of the worst Limassol derbies in recent years Apollon and AEL played out a goalless draw with neither side appearing happy after the game with the point they picked up even though neither deserved much more.

Apollon, who have produced free-flowing attacking football this season, were unable to create one clear-cut opportunity. In the second half, Apollon’s first and only attempt on goal came in the 86th minute when Carayol’s shot was beaten away by AEL goalkeeper Prozek.

AEL allowed their opponents plenty of possession and tried to hit them on the break. They hardly created anything of note in the opening 45 minutes but in the second half they went close twice but first Texeira dwelled for too long on the ball and then Andamovic sliced his effort wide from well inside the penalty area.

This was AEL’s second consecutive game and fifth home game without scoring.

In yet another poor spectacle, this time in Paralimni, Apoel did just enough to secure the points against Enosis with a 2-0 win.
The champions returned to winning ways after two unsuccessful results, but their Italian coach Paolo Tramezzani must have been worried by his team’s lacklustre performance, especially as Apoel face AEK and Apollon in their two final games of the normal season.

Ghayas Zahid gave Apoel the lead in the 29th minute with their first shot on goal while two new boys, Jacolis and Vidigal, combined late on in the game with the latter doubling the score for the leaders.

Anorthosis’ players managed to put aside the problems troubling their team off the field with the ‘Uzoho’ story and defeated their fellow Famagustans Nea Salamina 2-0.

Two first half goals by Englezou and Schildenfeld were enough to give Anorthosis the three points that under normal circumstances would have ensured them a top-six finish.

However with a nine-point deduction a distinct possibility (a decision is expected on Wednesday evening), Anorthosis will need to defeat Omonia next weekend and Ermis Aradippou on the last day to make it into the top-six.

Omonia must be kicking themselves for failing to defeat Doxa Katokopias in a game where they missed enough chances to have won comfortably.

It could have been a lot worse for Omonia as they found themselves trailing early in the second half after Pavlov and Papafotis gave the visitors a two goal lead.

Omonia clawed their way back into the game and snatched a point thanks to two late goals by their Greek strikers, Kolovos and Mavrias.

In the final weekend game AEK deservedly defeated Alki 2-0 thanks to goals by Acoran on the half hour and an Ivan Triscovski strike in the 54th minute.

Pafos FC beat Ermis 2-1 in the final game of the round on Monday night.