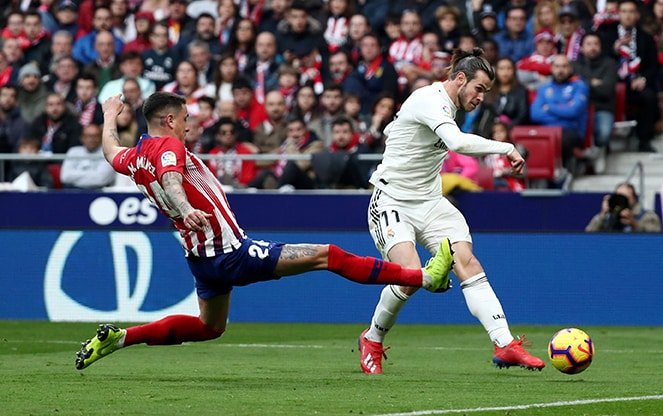 Gareth Bale's strike, coming in his 217th appearance for Real, took him into the club's all-time top 20 scorers, with an impressive ratio of 0.46 goals per game, more prolific than Bernabeu greats such as Raul Gonzalez and Emilio Butragueno

Gareth Bale struck his landmark 100th Real Madrid goal in Saturday’s 3-1 win at Atletico Madrid but there is a sense that the club’s record signing has been a disappointment in Spain despite a considerable haul of goals and trophies.

Bale’s strike, coming in his 217th appearance for Real, took him into the club’s all-time top 20 scorers, with an impressive ratio of 0.46 goals per game, more prolific than Santiago Bernabeu greats such as Raul Gonzalez and Emilio Butragueno.

He has also lifted 13 trophies since joining from Tottenham Hotspur in 2013 for a then world record fee of 101 million euros, among them a staggering four Champions League crowns, one La Liga title and a Copa del Rey.

But his stock among Real fans and in the public eye is not as high as peers such as Sergio Ramos or Luka Modric due to a constant struggle with injuries and his failure to step into the void vacated by Cristiano Ronaldo’s departure to Juventus.

Bale’s apparent lack of influence in the dressing room, hindered by an inability to speak Spanish despite 5-1/2 years in the nation’s capital, does not help his cause.

Not even decisive displays and goals in the 2014 and 2018 Champions League final triumphs over Atletico Madrid and Liverpool have cemented his place in the hearts of fans.

In an October survey in newspaper Marca, Bale was the player supporters blamed most for their poor start to the season.

Over 70 percent of respondents to a poll in daily AS, meanwhile, said they would like to see the club sell him.

There is still admiration for the forward’s immense physical qualities and his ability to produce magical moments like his overhead kick against Liverpool in Kiev or his breathtaking solo goal to win the 2014 Copa del Rey against Barcelona.

But there is a widespread feeling that, given his transfer fee and the expectation that he would take the baton from Ronaldo as the team’s galvanising figure, Bale has fallen short.

“We are always measuring Bale for his price, which gave us the fantasy that he was a world star,” said Real and Argentina great Jorge Valdano last year.

“But the last five years do not match up to what Madrid paid for him. Still, every season he seems to score a contender for goal of the year, and we have to applaud him for that.”

Real have made a remarkable recovery from their slump earlier in the season, barging their way into the title race after Saturday’s win over Atletico, their fifth consecutive La Liga victory.

But Bale has had only a peripheral role in their revival, missing most of January with injury and not making the starting lineup against Atletico or in the Copa del Rey semi-final, first-leg clash with Barcelona, losing his place to thrilling Brazilian teenager Vinicius Jr.

Madrid coach Santiago Solari praised Bale for seeing off Atletico and said he was in “phenomenal shape,” but the forward is far from certain to start away to Ajax Amsterdam in the Champions League last 16, first-leg tie on Wednesday.

“Vinicius has earned untouchable status for Solari, so now it is time for Bale, the 101 million euro man and the reason why (Paris St-Germain’s) Kylian Mbappe did not come to Madrid, who must reinvent himself,” said an article in AS.

Bale must consistently show he is capable of being more than a highlights player and a decisive substitute if he is not to be regarded as a player who just delivers spectacular moments.

New flu incidents down but some still in serious condition