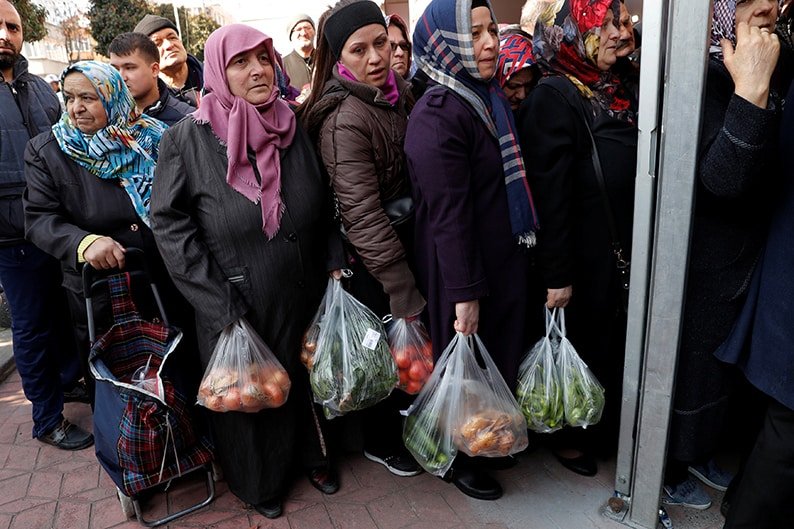 People wait in line to buy vegetables sold in a tent set up by the municipality in the Bayrampasa district of Istanbul, Turkey, February 11, 2019

Battling a sharp rise in food costs, Turkish authorities opened their own markets on Monday to sell cheap vegetables directly to shoppers, cutting out retailers who the government has accused of jacking up prices.

Crowds queued outside municipality tents to buy tomatoes, onions and peppers in Istanbul’s Bayrampasa district, waiting for an hour for items selling at half the regular shop prices.

The move to set up state markets follows a 31 percent year-on-year surge in food prices in January and precedes local elections next month in which President Tayyip Erdogan’s AK Party faces a tough challenge to maintain support.

Traders blamed storms in southern Turkey’s farming region for food price inflation, as well as rising costs of labour and transport. Authorities called it “food terror” and said they would punish anyone trying to keep prices artificially high.

“This was a game. They started manipulating prices, they tried to make prices skyrocket,” President Tayyip Erdogan said in a campaign speech on Monday. “This was an attempt to terrorise (society),” Erdogan said.

Under the government initiative, municipalities are selling vegetables at around 50 percent of prices recorded by the Turkish Statistical Institute in January. A maximum of three kilos of goods per person is allowed.

The move will be extended to rice and pulses such as lentils, as well as cleaning products, Erdogan said.

The project is currently taking place only in Istanbul, where around 50 sites are selling the cut-price goods, and in the capital Ankara. That means it is unlikely to have a direct impact on national inflation figures, but could mitigate the price rises for residents of Turkey’s two largest cities.

Mustafa Dilli, 55, said he was struggling to make ends meet and hoped shops would follow suit by lowering their prices. “I think I can only shop here from now on,” he said. “We barely make it through to the end of the month.”

Several shoppers in Bayrampasa said they hoped the sales would carry on after next month’s vote. “I am curious whether this will continue after the elections,” 43-year-old housewife Nebahat Deniz said as she bought spinach and eggplants.

Agriculture Minister Bekir Pakdemirli, visiting a tent set up by the Ankara municipality, said the project would continue as long as it is needed, and could become permanent.

At an Istanbul food market in a covered parking lot, traders complained that they could not compete with municipality stalls they said were subsidised by taxpayers and had been set up to win votes.

Standing behind an array of peppers, tomatoes and fresh greens, one trader said he was being hit by rising costs across the board.

“Prices in the food market are affected by the price of plastic bags, employee wages, stall fees, taxes, fuel prices. All of them are increasing the cost of the goods,” said the trader, who only gave his first name, Yusuf.

“The government does not have these costs,” Yusuf said. “All of their costs are paid from the money out of our pockets.”

Erkan said the profit margin at his own stall, which supports three or four families, was very tight. “If we buy for 8 liras per kilo from the wholesaler we sell with little profit. We sell the goods for 9 liras for example,” Erkan said.