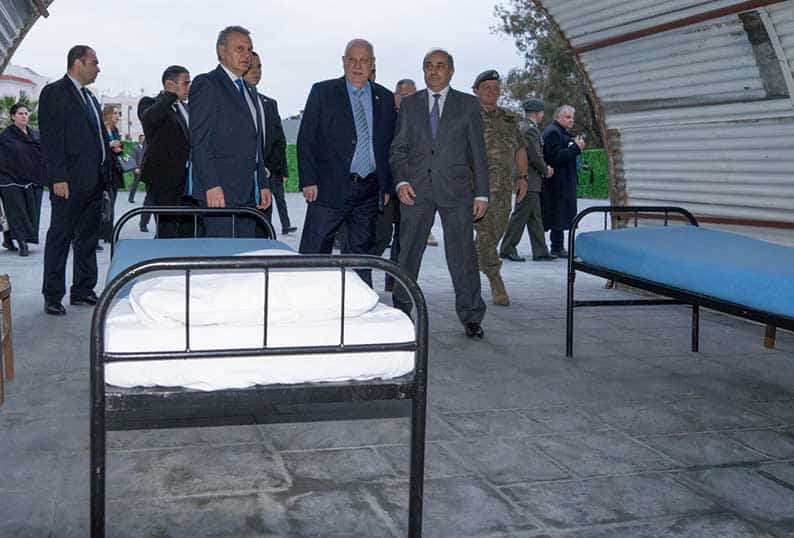 Israeli President Reuven Rivlin on Tuesday visited a monument in Nicosia dedicated to the 2,200 children of Holocaust survivors who were born in British detention camps in Cyprus in the aftermath of World War II in the late 1940s.

Speaking at the event where a plaque to the children was unveiled, Humanitarian Affairs Commissioner Photis Photiou said the monument had also become a “very special and historical place for Cypriots as well”.

The former British Military Hospital (BMH), he said, was the birthplace of many Jewish children and “as we mark the 73rd anniversary of the closing of the prison camps that housed a significant number of Holocaust survivors, we humbly pay our tribute to those who escaped from the mayhem and the despicable atrocities that took place in Europe before and during the World War II.”

Between August 1946 and May 1948, the British government intercepted nearly 53,000 Holocaust survivors seeking to resettle in British-controlled Mandatory Palestine. They interned these survivors in detention camps in colonial Cyprus.

Photiou said the Cyprus detainees sailed on 39 ships from ports in France, Italy, and the Balkans following long and difficult journeys from the detention camps in central and eastern Europe.

Approximately, 80 per cent of the detainees were aged 12 to 35, while 8,000 were between the ages of 12 and 18; the majority of them being orphans. During those nearly 22 months, he said, approximately 2200 babies were born in the Cyprus camps.

“Now in their early 70’s, some of them are here today with us to pay homage to the struggle of their people for a life without indignity and suffering,” he said.

Following the establishment of the state of Israel in May 1948, the Cyprus detention camps ceased operation and the detainees made their way to the newly created State of Israel.

He said that during the difficult times of detention of the Jewish people here, the people of Cyprus stood next to them “in solidarity and compassion”.

“Today, the dynamic relationship between Cyprus and Israel is one of a strategic partnership. The continuous interaction between our societies has an evident positive effect especially to our youth, our business circles but also in academia, in culture, and surely our diasporas around the globe.”

The monument, Photiou said, symbolises “the natural affinity between our peoples who have shared a quest for survival, and a common vision for a stable and secure future”.

New horizons for the urban explorer