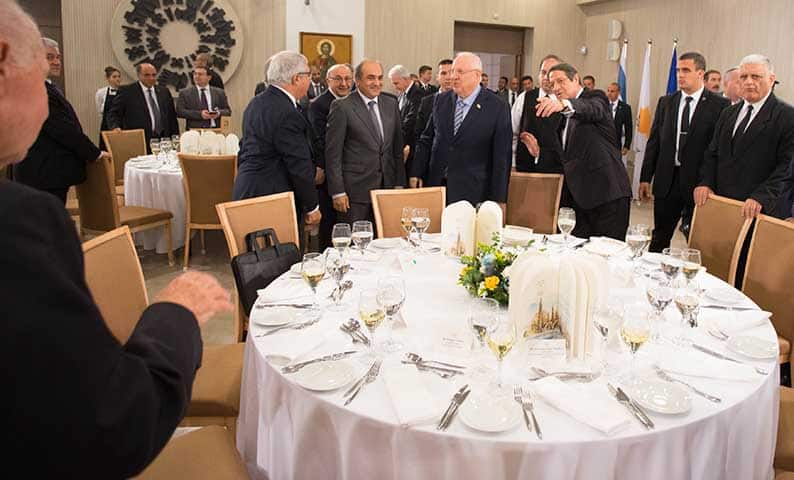 The official lunch at the presidential palace (PIO)

The EastMed pipeline could be “one of the greatest underwater projects in the world”, Israel’s President Reuven Rivlin said on Tuesday.

Rivlin, who was speaking at the presidential palace after having held consultations with President Nicos Anastasiades, also spoke of the possibility of extending the trilateral cooperation mechanism Cyprus, Israel and Greece have formed.

“Our prime purpose right now is on developing the Eastern Mediterranean pipeline,” Rivlin said. “This could be one of the greatest underwater projects in the world. Green and clean energy, together with information technology are not only an urgent need for all of us they are also an opportunity for all of us. They are the real future.”

He said Cyprus and Israel “can and must partner around shared interests and true friendship”.

“This bilateral strategic partnership is now a trilateral one together with Greece and it can be extended into a larger partnership as we were talking together in our meeting.”

The leaders of Cyprus, Greece and Israel said in December they were ready to proceed with an inter-state agreement concerning the EastMed pipeline, following a trilateral summit in Beersheba, Israel.

The agreement is due to be signed this year in Greece, pending approval from the European Commission, as the pipeline project has been designated an EU Project of Common Interest (PCI).

The agreement also contains references to the security of energy infrastructure.

As part of the deal, the three countries will set up a permanent secretariat in Nicosia whose task will be to monitor and coordinate the implementation of trilateral projects.

Some industry experts believe the four governments and the EU cannot fund the EastMed project, which requires investor participation, as well as buyers for the gas.

The pipeline is designed to initially carry 10 billion cubic metres a year from the east Mediterranean to Greece, about 1,900km, where it will connect to the Poseidon pipeline to Italy, about 300km.

In his comments, Anastasiades said energy “is of course a strategic pillar of our cooperation which creates a very positive regional interest as proven by our joined commitment to the EastMed pipeline, a project that taps to the security of supply and energy diversification of Europe.”

He said Cyprus also considers the trilateral partnership Israel and Greece to be one of significant geostrategic value.

“Our position, specifically on EU-Israeli relations is crystal clear: Israel is a very important strategic partner and a stabilising force in the Middle East region. Cyprus will continue to be an advocate in support of the security of the State of Israel, and calling for refraining from unilateral measures which could detrimentally affect EU-Israeli relations or even Israel’s own security,” Anastasiades added.

Later during hosted a state banquet in honour of Rivlin at the Presidential Palace, Anastasiades said: “Our friendship is anchored on the common vision for a stable and secure future – for our countries, our peoples, and our region.”

During his toast, Rivlin said, among other things, that Cyprus and Israel shared a very promising future. “We are planning the world’s longest pipeline in order to move energy between our countries. We must also work to build many more pipelines, bridges and connections between our peoples in order to tie together their creativity and energy in the fields of technology, health, security and the environment.”

He joked that Israel winning the 2018 Eurovision song contest and Cyprus coming in second place would not be a factor that would create tension between the two countries, and expressed hope that Cyprus would win the 2019 contest in Israel.

Rivlin arrived in Cyprus Tuesday morning under tight security that involved some roads in Nicosia and Larnaca being closed to traffic. Police did not announce what roads would be closed, or when, in advance due to security issues. The car park of the Hilton hotel in the capital was closed, and any cars left there overnight on Monday were towed.

Rivlin was given an official welcome ceremony at the presidential palace in Nicosia where he was greeted by Anastasiades, and where he laid a wreath at the statue of Archbishop Makarios.

The meeting was focusing on bilateral relations and their further improvement, with particular emphasis on issues which affect the citizens’ daily life such as education, culture, business activity, environment, transport and cybersecurity. Anastasiades was also to brief his Israeli counterpart on the Cyprus issue.
Rivlin is also expected to visit a monument in Nicosia dedicated to the 2,200 children of Holocaust survivors who were born in British detention camps in Cyprus in the aftermath of World War II, in the late 1940s.

Call for schools to take part in science fair