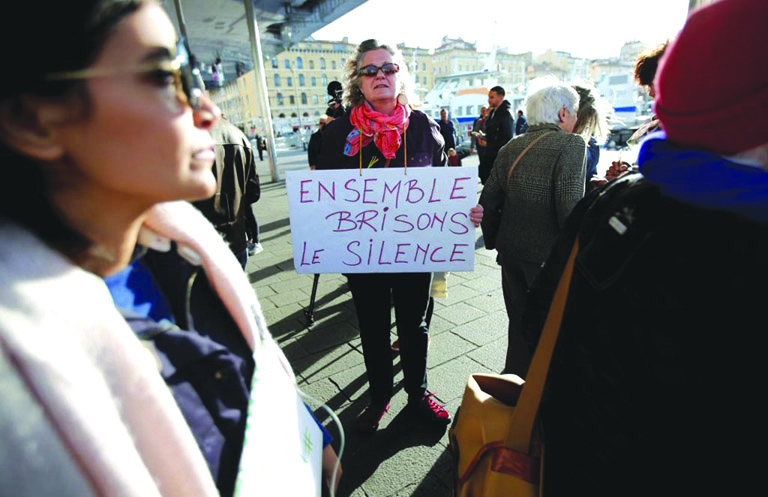 A woman holds a placard reading, “Together, break the silence”, during a gathering against gender-based and sexual violence in Marseille, France

A secret ‘boys club’ of journalists in France has been accused of harassing women writers and feminists during a near-decade long campaign of online bullying.

The left-wing Liberation newspaper on Monday suspended two of its journalists, including Vincent Glad, who founded the group, after its own CheckNews fact-checking unit revealed the League of LOL’s existence.

The affair has been dubbed the French media’s #MeToo, a movement that has seen women speak out about sexual violence and revealed the prevalence of sexual harassment and attacks against women around the world.

“Shameful. The treatment inflicted on numerous young women or young men by a certain informal group known as League of LOL makes you feel sick. Harassment, insults, cruel hoaxes, a whole array of digital attacks were used by this group,” Liberation’s Editor-in-Chief Laurent Joffrin wrote in an editorial on Tuesday.

He said Liberation would review social media policy for its journalists. His paper described the group as a macho “boys club”.

Others being disciplined include Liberation’s online editor Alexandre Hervaud and David Doucet, the web editor at music and culture magazine Les Inrockuptibles.

“The idea behind the group was not to harass women. Only to have fun. But very quickly, our way of having fun became very problematic and we didn’t realise,” Glad wrote in a lengthy apology posted on Twitter.

Glad said he had distanced himself from the group five years ago, but recognised he should have shut it down.

“I created a monster that I lost control of,” he said.

Sexism has for decades been rife in French political circles, though only in the past few years have women politicians, journalists and businesswomen felt more emboldened to speak out about harassment in the upper echelons of power and beyond.

In his online apology Doucet wrote that he had been a member of the group for two years: “In the small world that was Twitter then, I saw that certain people were being regularly targeted but I had no idea of the scale and the trauma suffered.

“I was cowardly and too happy to be a part of this band that the Twittersphere at the time admired to intervene.”

Filmmaker Florence Procel said she had been humiliated after the group recorded a hoax call offering her a job.

She responded to Doucet’s apology, writing on Twitter: “Thank you, David. It’s a good start. I will be able to start forgiving you.” She added: “When I say ‘ a good start’, I mean that your apologies were necessary (and appreciated for what they are) but not enough on their own.”

Hervaud wrote in his Twitter mea culpa: “The group’s constant spirit of mockery and cynicism clearly influenced the actions of some of its more borderline members, especially under anonymity, which snowballed and inspired others.”

“I offer my apologies that are as sincere as they are late.”

Call for schools to take part in science fair