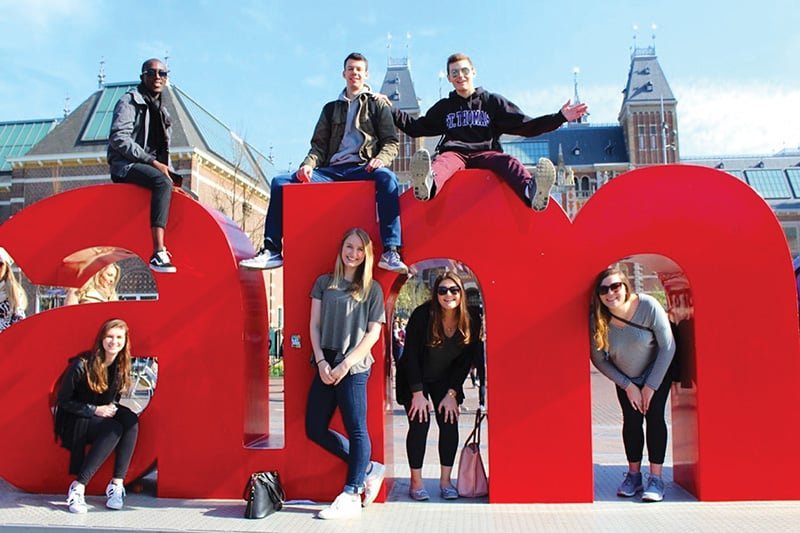 Although the UK and America remain popular destinations for Cyprus students, Holland is becoming increasingly attractive as many courses are offered in English. Speaking from experience, Lizzy Ioannidou says it is a step into the unknown worth taking

Arriving at Larnaca airport with two suitcases way over the weight limit and more handbags than allowed but still managing to hold my dad’s hand as we made our way towards the check-in desk, I wondered if I’d made the right choice in choosing to study in Amsterdam.

After finishing A-levels I’d been offered a place in all the UK universities I’d applied to, and as all of my friends were discussing the pros and cons of each of their options, I was powering through the long and time-consuming application process for a liberal arts and sciences college in Amsterdam.

I’d been to the UK around a dozen times, and while I didn’t find it terrible, bar London’s underground stations, I wanted something different, something new, and most of all somewhere with minimal chances of running into herds of Greek Cypriots. 18 years was quite enough.

Telling my parents I’d be going to Cannabis Central wasn’t quite the struggle I thought it would be. My dad may have been a guitar-carrying hippy in his day, but the only remnant of that is a serious music collection. Oddly enough, they were very proud.

The bottom line was, the UK was the last place my dad wanted me to go for studies, even though he was a UK university graduate himself. He found the tuition fees and cost of life ridiculous, and even more ridiculous that I would have to take out a student loan to go study. On top of that, he believed that continental Europe offered a better future for me, in terms of culture, job opportunities, and simply in ‘the way that they do things’.

Here I am though back in this excuse for a country, as he calls it. Sorry pops.

The application process was tricky. It’s not a general rule of thumb for Dutch universities, most have a pretty straight forward application process. I was just so fascinated by the multidisciplinarity offered by a liberal arts programme that I simply accepted the fact that I was running head-on into an excessively intensive academic wormhole.

And it was. One of the first things I was told by local students was that the university has a very high acceptance rate, but they know that not all will make it to the second year, and even fewer will graduate.
For three years I dragged myself out of bed in the morning, had the traditional Dutch breakfast of bread covered with chocolate sprinkles (hagelslag in Dutch, meaning hail storm) – it’s better in taste than in thought – coupled with coffee and then more coffee before making my way to university through the insufferable winds of a land without mountains.

A point on travelling here. A road without a bicycle lane in Amsterdam is as rare as a sunny day, and for those who can get their hands on a good racing bike that can storm through the winds, their transportation costs are zero and you’d be amazed at how easily you can go from one end to the other without breaking a sweat. Plus, going to bars with friends at night by bike can leave you with more stories about the way back than a bus ride could ever do.

I tried the bike thing for the first two years, but my student budget meant I could only afford a mediocre bike, and I wasn’t lucky enough to run into someone wandering the streets selling a stolen thousand euro racing bike for €10. So after two bikes had been stolen, one broke and the other I just left outside a friend’s house for months because I couldn’t be bothered, I moved onto trams, trains and buses, which worked out just fine.

In my Uni we had class sizes of no more that 15 students, with tables arranged in a horse-shoe shape ready for discussion rather than lectures, an attendance policy of no more than five absences per course, daily reading assignments, four essays per course plus discussion leading sessions, group projects and seemingly never-ending presentations – it was a lot, but it was worth it.

In the UK I’d have graduated with an English Literature degree, in Amsterdam University College I’m a Humanities graduate with a specialisation in Literature and Culture with a minor in the Social Sciences.
In one semester, for example, my five courses were Political Shakespeare, Contemporary Sociological Thought, Moral Dilemmas in Medical Practice, History of Philosophy, and French B1. And as a Lit student, you’d be amazed at how everything just comes together in an understanding of knowledge
I was free to tackle quantum physics alongside postcolonial literary theory and Tocqueville’s ideas on democracy if I wanted to, as long as I’d completed a certain number of courses in the track I wanted to specialise in.

The city is brimming with arts and culture, from dozens of museum exhibitions and performances every week, to underground scenes, to pop-up street artists making grey days unexpectedly bright.

But for every student, right behind the university, and just about in any area you live in Amsterdam, there are enormous parks where people wind down, have barbeques, play games, and simply lie away from the bustle of the city. And with canals painted in the view of every window, even staying indoors can be a pleasant experience.

The longer you live in Amsterdam, the less often you visit the tourist hotspots, like the centre of the city and the Red Light District, which is the closest thing to King’s Cross station you’ll find in terms of the density of people. You stray as far away from tourists as possible, and it always seems like it’s a special bunch that end up in Amsterdam.

Education fair bigger than ever