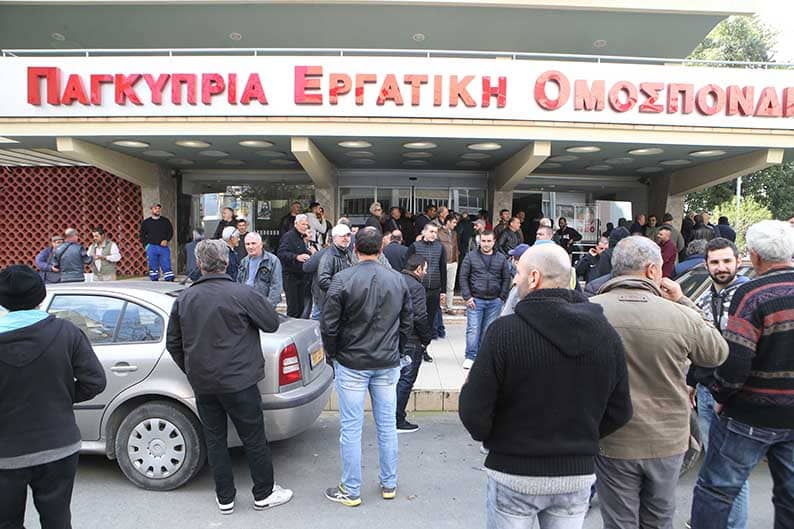 Construction workers at the Peo offices in Nicosia on Wednesday

Building contractors on Wednesday condemned the 24-hour strike by around 15,000 construction workers, asking them to come back to the negotiating table, while unions threatened to escalate the measures without further discussion.

The protesting workers met at the Peo premises in Nicosia and Paphos and the premises of Sek in Limassol, Larnaca and Famagusta.

They reiterated they would not give up until the matter is resolved.

The disagreement is over a collective agreement which is meant to regulate working hours, wages, holidays, benefits and provident funds.

Workers say the refusal of the employers to sign it encourages illegal employment and unfair competition and allows employers to pay workers less than they should.

The workers have only one request, head of Peo Pambis Kyritsis said in a statement before the gathering in Nicosia. “We want regulated employment relationships.”

The workers, he added, go to work and know that the minimum they are entitled to is what is stipulated in the contract and the employer is obliged to apply these stipulations. Without this, he said, the labour market becomes a jungle.

The bill was the result of years of negotiations and the employers “suddenly decided to crush it”, general-secretary of Peo Michalis Papanicolaou said.

“It is very unjust for the workers who contribute to their wealth daily. We have been talking for years and now they refuse to implement what was agreed. As we have heard they say this is how things are. Now [after the economic crisis] we can do whatever we want so we reject the agreement. They talk about dialogue, what dialogue? We had a dialogue for 10 years.”

“There will be painful consequences for delays in the construction activities,” the employers warned.

Head of the organisation of building contractors (Oseok) Costas Roushias described the strike as meaningless and urged the unions to resume negotiations.

He said that despite the fact that they rejected the collective agreement bill, the contractors are ready to return to the negotiating table.

“All have to agree, they did, we didn’t,” Frangos Prokapas from Oseok commented. “There are people from five districts, a lot of people, and the majority felt that the agreement “does not cover their needs and worries and as a result had to reject it”.

General-secretary of Sek Andreas Matsas stressed the matter needs to be resolved as it has wider implications. Soon a renewal of other collective agreements is due, such as for the hotel industry, he said, and a similar situation may evolve in this sector or in others, affecting the wider economy.

The strike affects construction sites all over the island. The work of around 10,000 other employees such as electricians and civil engineers will also be affected.