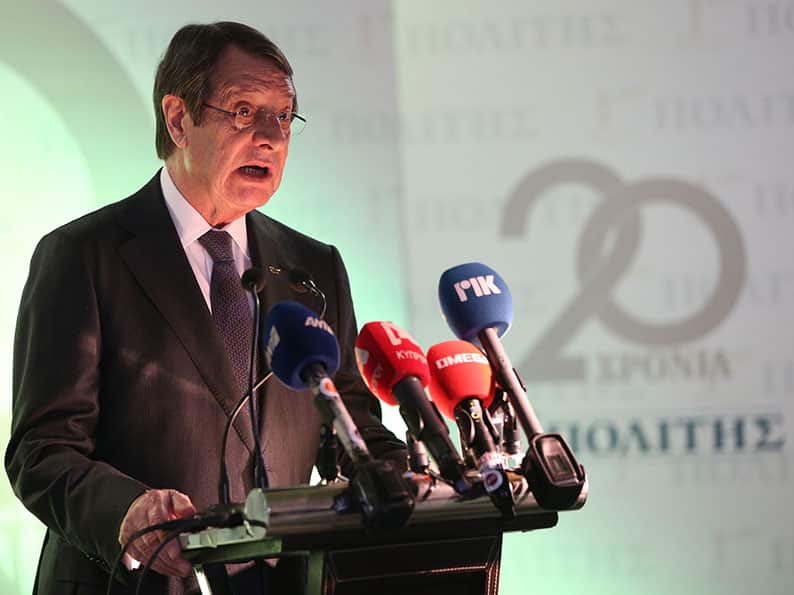 President Nicos Anastasiades, said on Tuesday evening that the proposals he put forward during the Conference on Cyprus in the Swiss resort of Crans-Montana in the summer of 2017 are no longer valid from the moment talks were discontinued.

He was replying to questions on the sidelines of an event celebrating the 20-year anniversary of daily “Politis” on Tuesday evening, a presidency press release said.

Asked whether the proposals he put forward at Crans-Montana were valid or whether they had been withdrawn Anastasiades said that “as I stated during the same evening, when the (UN) Secretary-General decided to discontinue the dialogue, but also before in writing, it is evident that the proposals were submitted on the condition that an agreement would be reached.”

“That evening I clearly stated that from the moment the dialogue is discontinued, the proposals are no longer valid,” he said.

Replying to a comment by a journalist that the Turkish Cypriot side did not submit any proposals, Anastasiades said: “no, apart from two paragraphs which referred to the presence of troops and the continuation of intervention rights.”

Replying to another question about the Crans-Montana conference and the UN Secretary-General’s framework and whether it was the one submitted on June 30 or on July 4 he explained that the informal document of June 30 did not “unfortunately” reflect what the Secretary-General defined as the framework within which the negotiations should go ahead.

Both the Greek Cypriot side through its negotiator Andreas Mavroyiannis via email and the Turkish Cypriot side “protested that the document the UNSG’s Special Adviser Espen Barth Eide had submitted did not correspond to reality or did not convey the precise positions of the Secretary-General,” he said.

He added that as a result, and due to the lack of progress in the ensuing days, on July 4 a meeting was convened which included all Cypriots, and Eide dictated what the Secretary-General had asked him to convey to the sides during a telephone communication.

Therefore, he explained, “there is no document for the 4th of July but there are clarifications on the ambiguities or the omissions the informal document Eide gave us contained.”

Replying to a journalist’s comment that there were no minutes about this Anastasiades said “there are definitely minutes, since both sides kept minutes, in shorthand or otherwise.”

He replied negatively to a question whether he would release the minutes, expressing “regret” that certain people just choose to criticise without too much thought.

“And it is with regret that I say that, unfortunately, while for all the days negotiations were ongoing, whether they were in the morning, in the afternoon or the evening, minutes can be found, the only minutes missing are those from the morning of the 4th of July”

Replying to another question Anastasiades said that “there are minutes” adding that “they were kept by certain people”. He further expressed the hope that UNSG’s special envoy Jane Holl Lute’s efforts to find the minutes would be successful.

Party leaders on both sides express support for federal solution