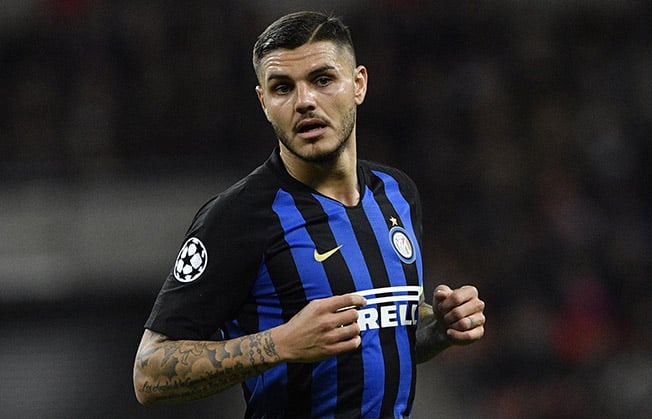 Inter Milan have stripped leading scorer Mauro Icardi of the team captaincy and handed it to goalkeeper Samir Handanovic, the Serie A club said on Wednesday.

Inter did not give an explanation for the change, which it announced on its Twitter feed, and it did not immediately reply to emailed questions about the switch.

Argentine forward Icardi and the club have been in protracted negotiations over the extension of his contract.

The 25-year-old has been Inter‘s leading marksman in Serie A for the last four seasons and is also top scorer this term with nine goals, although he has not hit the target in their last seven league outings.

Icardi has had a turbulent relationship with the club and its fans and often provides fodder for the gossip columns, partly thanks to his marriage to Argentine media personality Wanda Nara, who was previously married to Icardi’s former teammate Maxi Lopez.

Nara is also Icardi’s agent, and last month the player said she would continue to represent him for the rest of his career following a report in Gazzetta dello Sport that Interwanted to deal with someone else.

In 2016, Icardi was jeered and insulted by Inter‘s “ultra” fans during a match against Cagliari after they were angered by a chapter in his autobiography where he described a confrontation with supporters the year before.

Last week, coach Luciano Spalletti appeared to criticise the club for not finalising a deal with Icardi to extend his contract, which still has 2-1/2 years to run.

“This needs to be resolved because when you do things by half, you leave them open to interpretation,” said Spalletti after the 1-0 win over Parma on Saturday. “Mauro has been affected by certain situations in the last few weeks.”