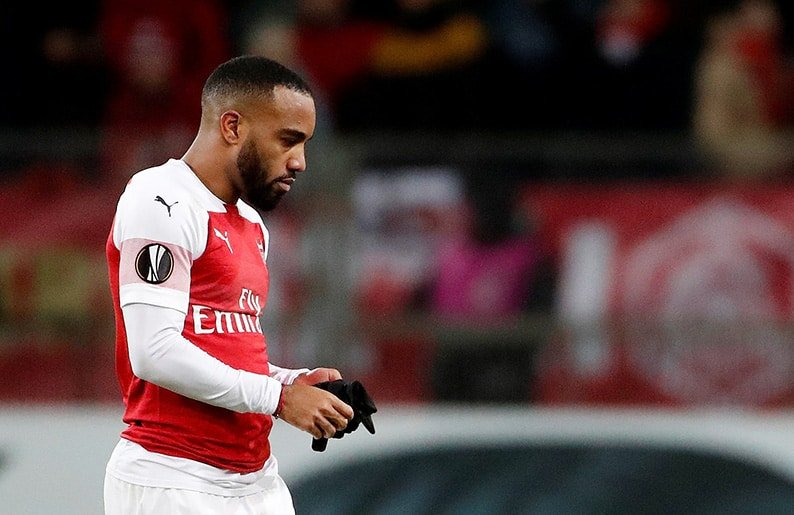 Arsenal's Alexandre Lacazette reacts after he has been sent off

Alexandre Lacazette was sent off as a strong Arsenal side slumped to a surprise defeat at the hands of BATE Borisov to leave their Europa League tie finely poised heading into the second leg.

The Gunners never got going at the Borisov Arena and created very little in the way of clear-cut chances, with Stanislav Dragun’s header on the stroke of half-time earning a 1-0 win for the Belarusian Premier League champions.

With no game between now and the return leg at the Emirates Stadium in a week’s time, Unai Emery opted to name a near-full strength team but Arsenal will now have to overcome a narrow deficit to advance from the last-32 in front of their own fans.

They will have to do it without Lacazette, the striker dismissed by referee Srdjan Jovanovic for a petulant swing of the arm which summed up the frustrations for the visitors.

Emery made just two changes from Saturday’s Premier League win at Huddersfield as Petr Cech started in goal with Granit Xhaka also recalled following a groin injury – although the decision to leave Mesut Ozil back in England will again come under close scrutiny following a poor display.

Henrikh Mkhitaryan missed a glorious opportunity to put Arsenal ahead with less than two minutes on the clock, shooting straight at Denis Scherbitski after good work from Alex Iwobi and Sead Kolasinac.

The hosts threatened with the occasional early counter-attack, Xhaka booked for pulling back Maksim Skavysh before Cech was forced into his first meaningful action of the night to keep out a shot from the BATE midfielder.

Arsenal, though, were dominating possession even if they were struggling to do anything meaningful with the ball – Lacazette heading wildly over from close range after one move ended with Kolasinac crossing for the France forward.

BATE were happy to soak up pressure and strike when given the rare opportunity to do so and looked more dangerous in and around the penalty area than their opponents.

Kolasinac had to be in the right place at the right time to block Ihar Stasevich’s dangerous low cross but it was soon after that Nemanja Milic should have put BATE ahead yet he could only turn a cross onto the post from six yards.

With the first half wearing on, Arsenal were still striving to play their natural game on a poor surface, with Kolasinac firing wide as he latched onto Shkodran Mustafi’s centre.

But it was BATE who went ahead as Dragun rose to head home Stasevich’s free-kick on the stroke of half-time after Monreal had upended Skavysh.

Arsenal looked more lively after the restart but Lacazette saw a 55th-minute finish correctly ruled out for offside, with the lively Stasevich drawing a low save from Cech after beating the offside trap at the other end.

Emery, still clearly unhappy at what he was witnessing, summoned Lucas Torreira and Pierre-Emerick Aubameyang from the bench with 25 minutes remaining.

Kolasinac again shot wide from an acute angle before being replaced by Denis Suarez as Emery once more turned to his substitutes in the hope of changing the game.

It proved to be in vain, with a late red card for Lacazette – who swung an elbow at Aleksandar Filipovic as the pair tussled for the ball – only compounding a poor evening for Arsenal.

‘Banned’ student gets to speak