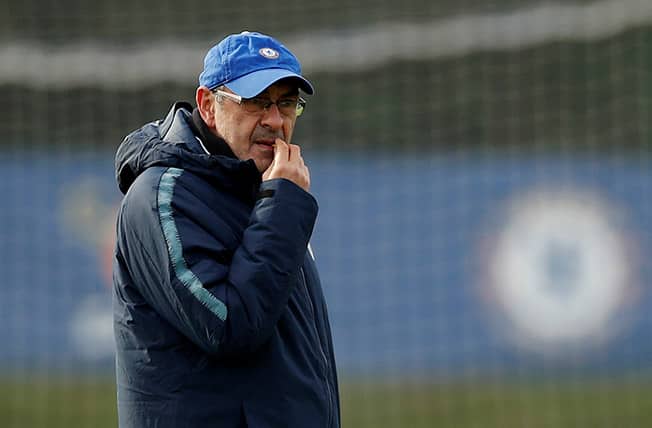 Maurizio Sarri’s Chelsea face the first of a series of short-term tests at Malmo on Thursday night as the Italian faces a crucial period which could determine his future as head coach.

The 60-year-old has not heard directly from Chelsea owner Roman Abramovich since Sunday’s humiliating 6-0 loss at Manchester City, the Blues’ opponents in the Carabao Cup final on February 24.

Sarri maintains lifting the League Cup is a realistic target, but the first goals are the Europa League last-32 tie with Malmo, the first leg of which takes place in Sweden.

In between comes Monday’s FA Cup fifth-round meeting with Manchester United, while a Premier League clash with Tottenham follows the Wembley date.

“We need short-term targets, and then a dream in the long-term,” Sarri said.

“On Monday, the target will be to get into the quarter-finals. Then to win the League Cup. It’s very strange to say it after a 6-0, but we want to win.”

The Blues’ 4-0 loss at Bournemouth last month was Chelsea’s worst since September 1996, until City inflicted further embarrassment on Sarri’s side, who suffered their biggest defeat in 28 years.

Following the Etihad Stadium defeat, Sarri said in an interview with an Italian broadcaster that he “never” speaks to Abramovich, an owner not renowned for his patience.

Sarri insisted his comments had been mistranslated when asked if he had spoken to Abramovich.

“No, not this week – not in the last three weeks,” Sarri said.

“I didn’t say never. Not very often, but not never. The interview was in Italian and in Italian I am better than you.

“I’d like to speak with somebody in the club, not necessarily the owner. I usually speak with Marina (Granovskaia, the director) and for me it’s enough.”

There has been plenty of discussion with his players – a 50-minute dressing-room inquest at Bournemouth followed by an hour-long one on Monday.

Sarri has been critical of his players’ motivation, especially after the loss at Arsenal.

He insisted motivation was not the issue at City, but the problem was psychological.

“It’s always a mind problem, a mental problem, so we need to solve them,” he added.

Left-back Marcos Alonso and midfielder Ruben Loftus-Cheek did not travel to Sweden. Alonso was rested, Sarri says, and Loftus-Cheek has suffered a recurrence of his niggling back problem.

Malmo boss Uwe Rosler, a former City striker, delighted in Chelsea’s loss despite the prospect of a backlash.

Malmo have not played since beating Besiktas in the Europa League group stages, but Rosler sees flaws in the Blues which his side can expose.

He said: “I think we will get opportunities. I saw areas where we can cause them problems.

“We have a plan. With a bit of luck and some outstanding performances, we have an outside chance of getting a result.”

Emery not looking to make weather an excuse in Europa League

Plant of the week: Plant used to ward off evil spirits used as mood enhancer